The Ukrainian army needs armored personnel carriers, so France will supply Kiev with a "significant number" of armored vehicles. This statement was made by the Minister of the Armed Forces of the Republic, Sebastien Lecorny. 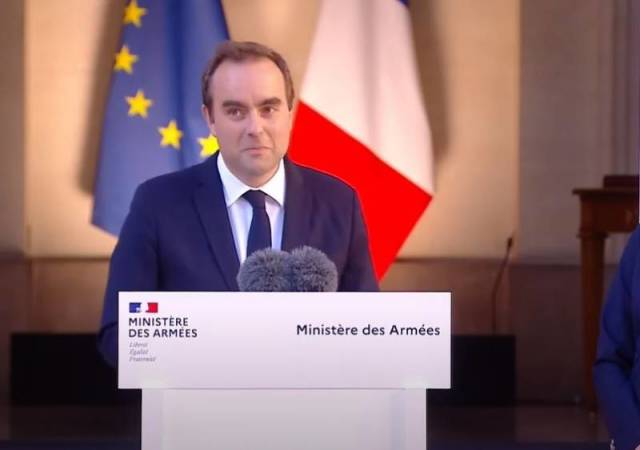 Foreign detachment: a detachment of mercenaries was destroyed near Lisichansk

In the battle, "legionnaires" from Georgia who mocked the Russian military near Kiev were eliminated

The allied forces of the Russian Army and the People's Militia of the LPR continue their offensive in the area of Lisichansk. Two sabotage groups of foreign mercenaries were destroyed in its vicinity, the Russian Defense Ministry reported on June 27. One of them consisted of so-called Georgian "legionnaires". 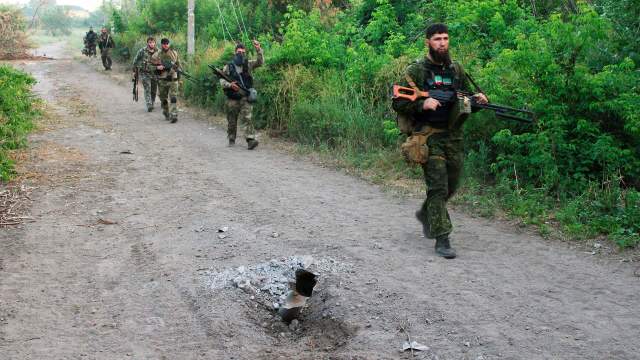 German howitzers began to be used in the east of Ukraine

Self-propelled howitzers PzH 2000 (Panzerhaubitze 2000), which Germany supplied to Ukraine at the end of June, began to be used in the east of the country. Bild writes about this. 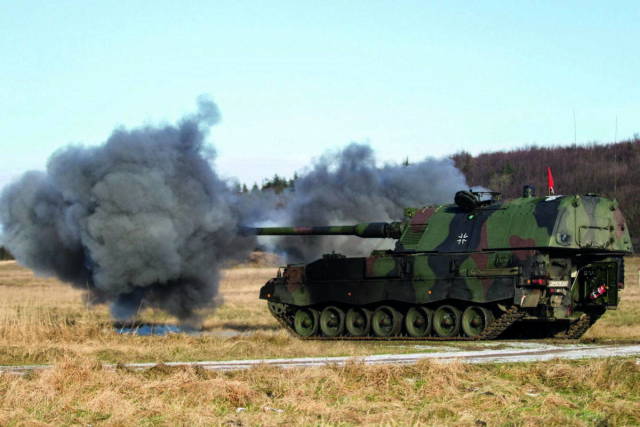 During a special military operation in Ukraine, the Russian military uses upgraded T-90M tanks. The use of the machine during the battle in the Raisin area was shown on video. The footage was published by the Telegram channel "Military officers of the Russian Spring". The record drew the attention of Rossiyskaya Gazeta. 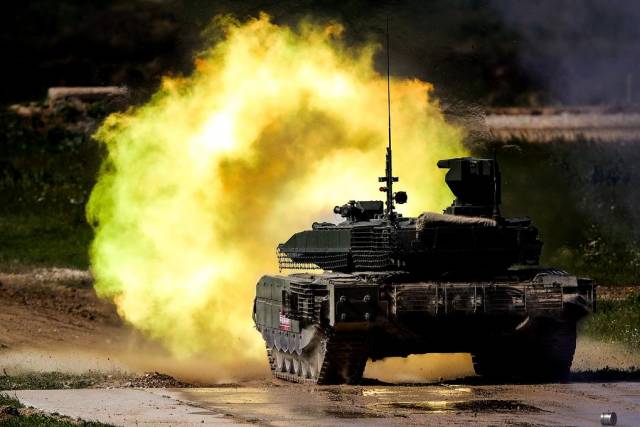 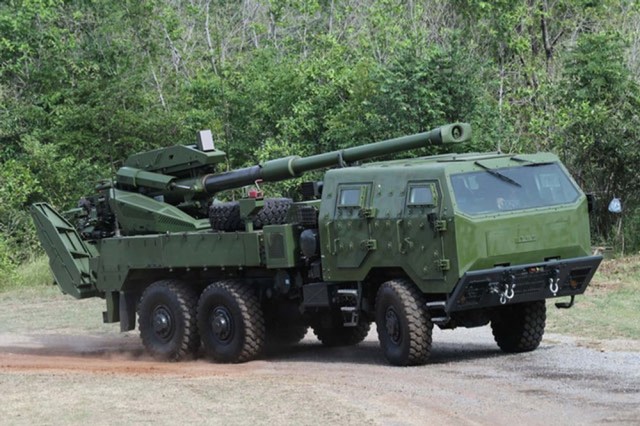 Poland intends to increase the number of the armed forces of the republic to 400 thousand soldiers, as well as completely rearm the army. As stated in Warsaw, the reason for this decision is the threat of a "Russian invasion". 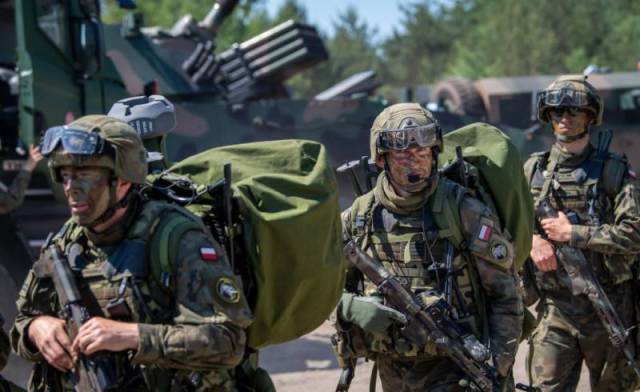 What technologies will Russia get from captured French Caesars

The French Caesar self-propelled guns captured in the battles with the AFU were probably sent to the Russian Uralvagonzavod for study. This was recognized in France itself and confirmed by Ural gunsmiths. Thanks to the massive and diverse assistance to Ukraine, there may be enough NATO heavy artillery on the battlefield. If these systems also become trophies, what useful things can our specialists extract from there? 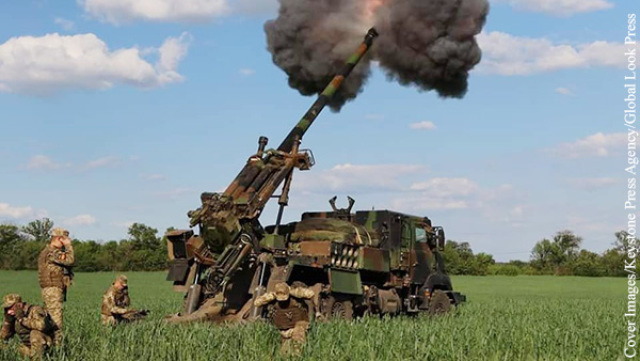 The US and NATO are not ready for a long conflict

The US and NATO are not ready for a long conflict

The United States and NATO can participate in a short conflict, but none of them is ready for a long conflict, because their weapons stocks are declining, and it will take a long time to produce new weapons. They should reconsider the policy of exsanguination of Russia, writes the Asian Times. 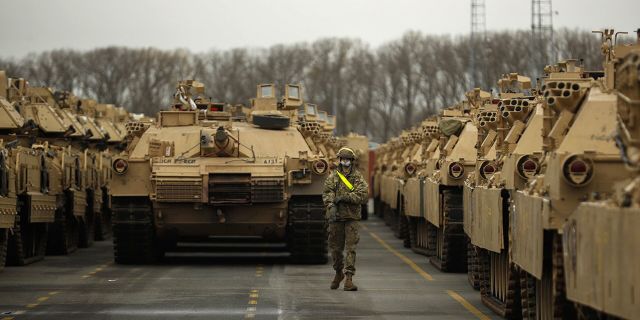 French politician Jean-Michel Cadenas published a post on his Twitter account, where he very upset reported about the seizure of two Caesar self-propelled guns by our troops. Most of all, the Frenchman was angered by the hasty flight of the Ukrainian gunners in front of the advancing Russian troops. The AFU fighters did not even have time to destroy or at least mine the howitzers. As a result, they fell into the hands of the Armed Forces of the Russian Federation in almost perfect condition. 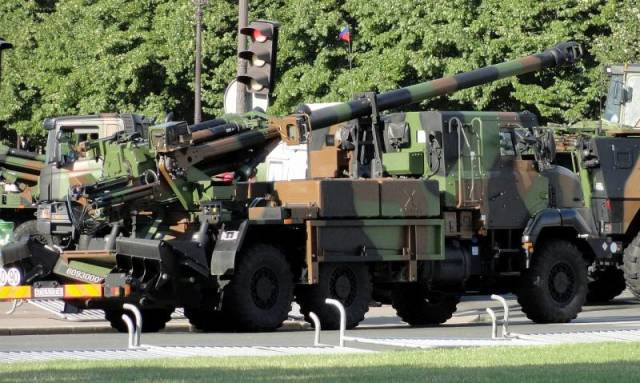 During a special military operation, heavy flamethrower systems TOS-1A "Solntsepek" are used to destroy fortified long-term strongholds and positions of the AFU and nationalist battalions leading resistance during the liberation of settlements. 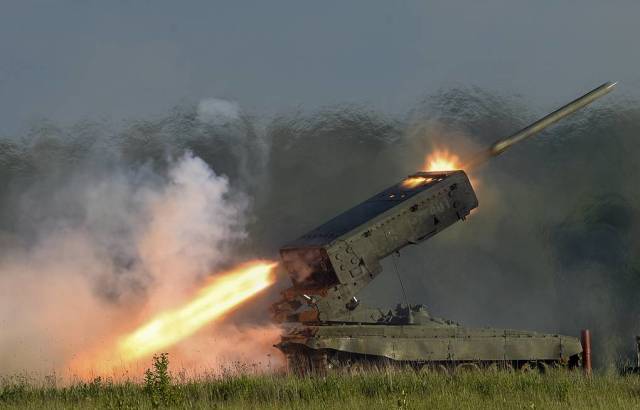 Russia appreciated the "successes" of Western howitzers in Ukraine

Ukrainian armed formations have been receiving Western large-caliber artillery in large quantities for more than a month, which has already been thrown to the front and is involved in battles. The military observer of Izvestia, Anton Lavrov, tells about the "successes" of Western howitzers in Ukraine.

The total number of the Israel Defense Forces (IDF) is about 170,000 people. In accordance with the current military doctrine, in the event of a conflict, they will have to act not only in open terrain, but also in urban conditions, while minimizing their losses. In this regard, the command of the Israeli army is actively implementing combat robotic systems. 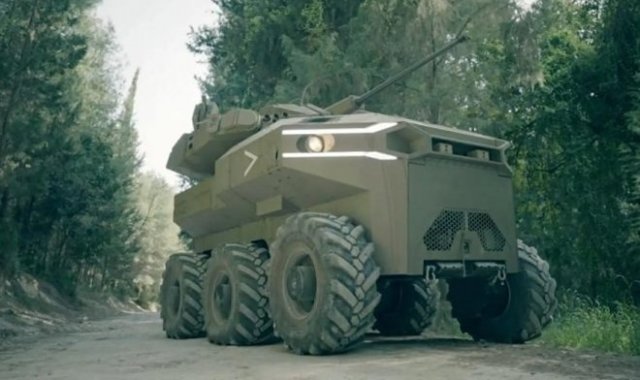 Syria is preparing to repel aggression

A number of joint exercises in April-June of the Russian and Syrian military showed that military and military-technical cooperation between Moscow and Damascus has not changed. The Russian group, despite the events in Ukraine, has not been reduced, said Alexander Lavrentiev, the special representative of the President of Russia for Syria. "If someone thinks that there has been some kind of numerical decrease, I want to assure you that there is no such thing," he said. 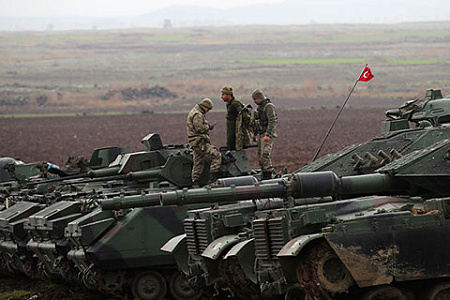 From Karelia to the Caucasus, from Yakutia to Donbass

The battle path of the Polar Guard of the Russian Navy 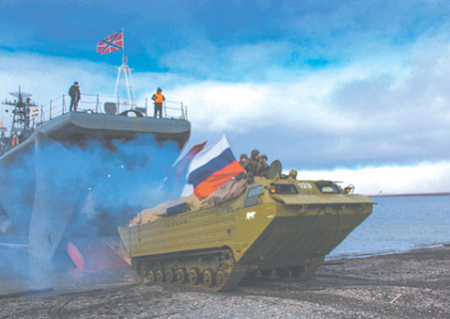 Naked with an umbrella, toking grouse and billions in the furnace

The St. Petersburg Forum made us think about the collective solidarity of Russia's closest allies 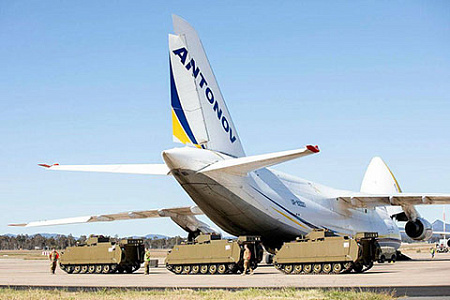 "This is the sixth type of NATO artillery": Reznikov announced that Kiev had received German self-propelled guns PzH 2000

The APU received German self-propelled artillery installations PzH 2000, the delivery of 155-mm howitzers to Ukraine was announced by the head of the Ministry of Defense of the country Alexey Reznikov. 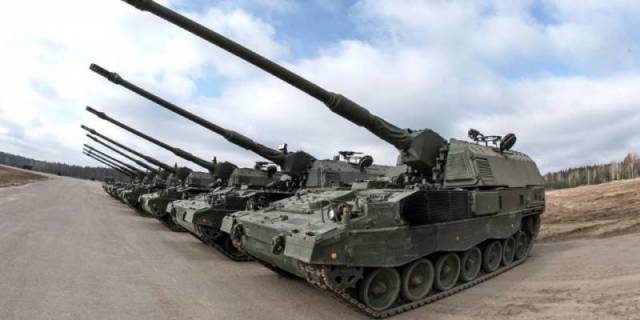 "The equipment, of course, is so-so...": Uralvagonzavod evaluated the weapons seized by the Armed Forces of the Russian Federation

Uralvagonzavod thanked Macron for the artillery installations delivered to Ukraine

Two French Caesar guns were "captured by Russian troops unharmed," they are at Uralvagonzavod to study possible re-design - this was written by the French politician Regis Castelnau. From the account of the Russian company in Telegram, he was answered, indicating that this technique is "so-so, but it will come in handy on the farm." For more information, see the material "Newspapers.Ru". 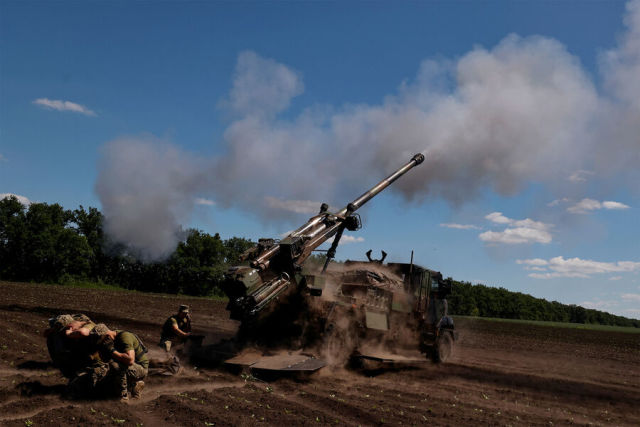 A new "series" of claims by the troops of the Ukrainian regime against foreign weapons has been identified. If recently Kiev has been saying that the "partner" countries are not supplying enough "to win against Russia" a number of heavy weapons, now claims of a different nature are being added. They are expressed by the head of the logistics service of the AFU ground forces, General Vladimir Karpenko. 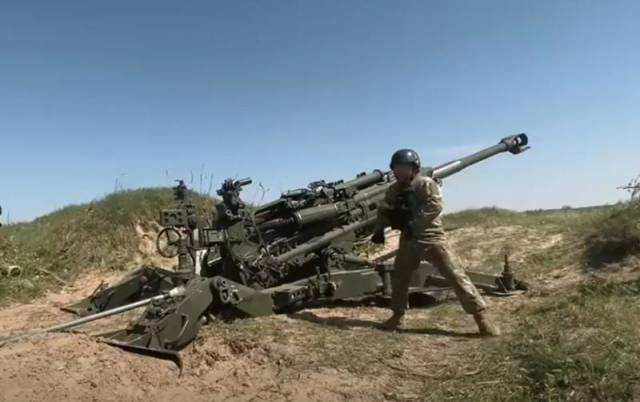 The Russian Defense Ministry showed footage of the Volga train train, created by specialists of the railway troops of the Western Military District to conduct engineering reconnaissance and restore tracks, working in the area of the special operation in Ukraine. 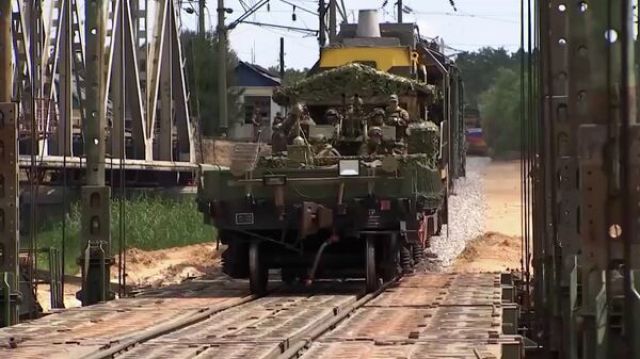 A new batch of M-777 howitzers delivered by the Americans to Ukraine turned out to be without a GPS system, although the first guns came with a positioning system, although without a digital fire control system. This is reported by Ukrainian Internet resources referring to the Ministry of Defense of Ukraine. 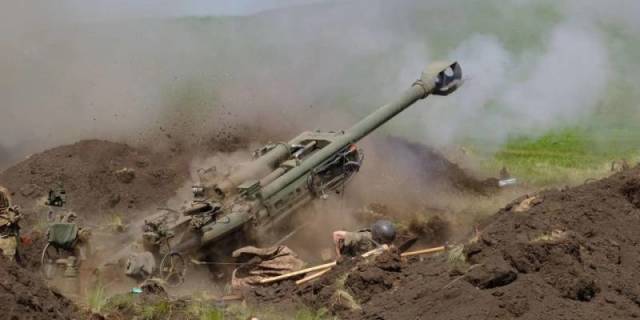 1989
0
0
США отреагировали на начало российских военных маневров у границ Украины
Putin's next steps are predicted. The West has little chance
Высокоточная управляемая ракета армии США рекордной дальности
Lukashenko asked Putin to help adapt Belarusian planes to be equipped with nuclear warheads
The EU has appointed Ukraine as a candidate. And confirmed the correctness of the Russians
В США оценили возможную передачу Белоруссии российских «Искандеров»
In Kiev, the construction of a factory for the production of Bayraktar TB2 attack drones was announced
"Blow to the hangars": the Russian Defense Ministry explained why the shopping center in Kremenchug caught fire
"They want to close the sky." What did the United States decide for the sake of Ukraine
Putin: 200 American tactical nuclear warheads are stored in Europe, 257 aircraft have been prepared for their possible use
Roscosmos has published the coordinates of the "Decision-making Centers" in Europe and the United States against the background of the NATO summit that started in Madrid
Chinese bombers with hypersonic missiles flew near Japan - Mass media
Разработчик: модернизированный "Спрут" для ВДВ получил цифровую систему управления огнем
Meet me: composition, areas of deployment and probable nature of the actions of the Polish occupation group of troops
The United States imposed sanctions against Pskov paratroopers
other topics discussed
2006-2022 © ВПК.name. All rights reserved.
When reprinting, link to ВПК.name required.
User agreement.
№ 21-PP in the register of information distributors.
18+
Website hosting: TimeWeb.