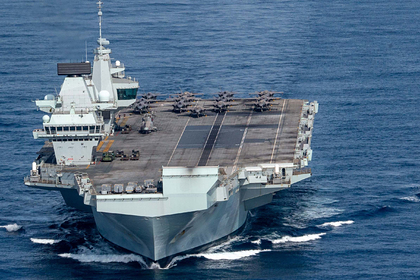 The British carrier strike group (CSG), led by the aircraft carrier Queen Elizabeth, could be defeated in the Mediterranean sea, the Russian naval strike group (GAC) supported the missile cruiser "Moskva", predicts in "Military-industrial courier" the Vice-President of the Russian Academy of rocket and artillery Sciences (raran) on information policy, doctor of military Sciences Konstantin Sivkov.

The expert compared the capabilities of the AUG, supported by the naval forces of the British NATO allies, and the KUG, which can receive reinforcements from the Russian Hmeimim base in Syria. According to the Deputy President of the Russian Academy of Sciences for Information Policy, "the aircraft carrier is focused on participating in expeditionary actions against a weak enemy."

"If we compare the strike potentials of the two groups, we can see that in the number of anti — ship cruise missiles located on the ships (anti-ship cruise missiles-approx. "Tapes.ru") they are identical — 48 missiles on each. However, the Russian KUG has a significant qualitative superiority — our missiles are twice as long-range, have a more advanced and noise-resistant GOS (homing head-approx. "Tapes.ru"), and also develop supersonic flight speed, " the Doctor of military Sciences is sure.

According to Sivkov, the British have the superiority in shipboard air defense (air defense). Nevertheless, the author assures that the use of the Russian S-400 Triumph located in Khmeimim "can complement the air defense system of our ship connection if there is an appropriate organization and over-the-horizon target designation."

The author considers it unlikely that Britain's NATO allies will interfere in a hypothetical conflict, since this could provoke the outbreak of a global nuclear war.

In July, the Defense News publication, referring to the statement of the British Minister for Defense Procurement, Jeremy Queen, reported that the Defender (one of the AUG guard ships that entered the Black Sea), which violated the borders of Russia near the Crimea in the same month, was the only one operating among the five Type 45 destroyers that are in service with the British fleet.

In July 2020, RIA Novosti was informed at the 13th ship repair plant of the Black Sea Fleet (Black Sea Fleet) of Russia [...] that the 40-year-old missile cruiser "Moscow" of project 1164 "Atlant" located in the Crimea was repaired.