As reported, on June 16, 2021 in Taganrog from the factory airfield of PJSC "Taganrog Aviation Scientific and Technical Complex named after G. M. Beriev" (TANTK; part of PJSC "United Aircraft Corporation" - UAC), the first flight of the second amphibious aircraft built for the Ministry of Defense of the Russian Federation in the performance of a specialized search and rescue aircraft Be-200PS (in fact, this is a Be-200CHS aircraft without a fire extinguishing function) took place. The aircraft has a tail number "23 yellow", registration number RF-88457 and serial number 356. 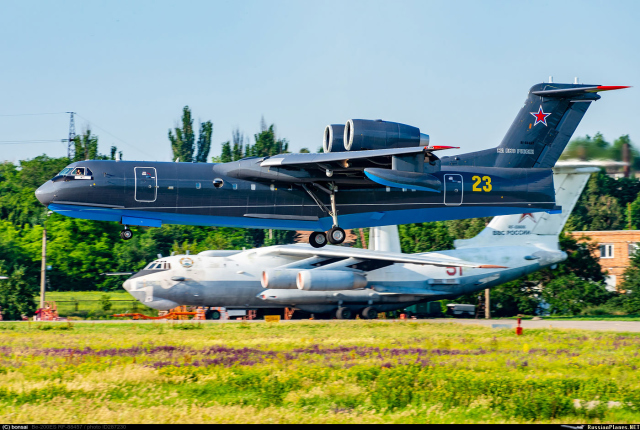 Earlier, in May 2013, the Russian Ministry of Defense signed a State contract with the Beriev Marine Aviation Company for the supply of six Be-200 amphibious aircraft to the Russian Navy- two Be-200ChS and four modified Be-200PS search and rescue aircraft (without the fire extinguishing function) - with a total cost of 8.4 billion rubles. The delivery was supposed to be made under the terms of the contract in 2014-2016, but the construction of aircraft under this contract (serial numbers 309, 310 and 351 to 354) at TANTK turned into a long-term construction and, in fact, according to known data, did not progress beyond the initial stage. In 2017, the Ministry of Defense terminated this contract. In August 2017, the Moscow Arbitration Court granted the claim of the Russian Ministry of Defense to recover from PJSC "Taganrog Aviation Scientific and Technical Complex named after G. M. Beriev" more than 6.726 billion rubles as an unprocessed advance under this contract.

In 2018, the Russian Ministry of Defense signed a new contract with the UAC for the supply of Naval Aviation of the Navy only three Be-200 aircraft - one in the Be-200ChS version and two in the Be-200PS version (in fact, the Be-200ChS without the fire extinguishing function), the first of which was to be delivered in 2019.

The first aircraft in the performance of the be-200ES this contract (hull number "20 yellow", registration number RF-88450, serial number 311, the name "Alexander's"), built on tank, made its first flight in Taganrog, 14 Feb 2020 14 Jul 2020 have been transferred to part 190-th training mixed aviation regiment 859-th Center of combat training and retraining of pilots of Naval aviation of the Russian Navy in Yeysk.

On November 10, 2020 [...], the first aircraft built for the Ministry of Defense of the Russian Federation under this contract, the Be-200PS (Be-200ChS without fire extinguishing function) with the tail number "21 yellow", registration number RF-88456 and serial number 355, made its first flight in Taganrog. According to known information, at the beginning of 2021, the aircraft was formally transferred to the Russian Ministry of Defense, but so far it remains on the TANTK.

The Be-200PS aircraft with serial number 356, now raised in the air, became the third board under this contract with the Ministry of Defense and the second Be-200 built in the search and rescue version of the Be-200PS. Visually, the Be-200PS modification can be distinguished from the Be-200PS by the absence of water tank flaps and the presence of portholes in place of overflow holes.

This is the ninth serial Be-200 aircraft of Taganrog production. Earlier in 2016-2018, TANTK built six Be-200ChS (serial numbers 303 to 308) for the Ministry of Civil Defense, Emergency Situations and Disaster Relief (EMERCOM) of Russia under the EMERCOM contract with the UAC dated May 2011.

Before that, in turn, nine Be-200 aircraft were built - two flight prototypes at TANTK (Be-200 in 1998 and Be-200ChS in 2002) and seven serial Be-200ChS at the Irkutsk Aviation Plant (commissioned from 2003 to 2011), of which six were delivered to the Russian Emergencies Ministry and one to the Azerbaijani Emergencies Ministry. Thus, the Be-200PS aircraft now raised in the air for the Ministry of Defense became the 18th flight copy of the Be-200.

In December 2020, the Russian Ministry of Emergency Situations signed a contract with TANTK html "target=" _blank "rel= "nofollow" > contract> for the manufacture and supply of two more Be-200ChS amphibious aircraft with a total cost of 5.7 billion rubles, with delivery until December 1, 2022.

BorSch
20.06.2021 18:55
...и нырять.
+1
Inform
Do you want to leave a comment? Register and/or Log in
Log in via Facebook
The Permanent Representative of the Russian Federation to international organizations in Vienna Ulyanov called the refusal of AUKUS to provide data on the union abnormal
The United States agrees with Stoltenberg on the inadmissibility of Russia's influence in the issue of NATO expansion
In the USA, it was proposed to ban "Solntsepeki" and "Pinocchio"
Putin signed the law on the powers of Roscosmos in the field of infrastructure construction
Korean aircraft carrier "won back" funding
Конфликты: Йемен - "забытая" война
The National Interest (США): российский танк Т-80 — это не шутка
In the USA, they were surprised by the size of the Su-75
Russia will offer India the technology of the Octopus tank
Шойгу счел необходимым построить в России еще несколько крупных городов
The State Duma appreciated the idea of banning the sale of grenades after the shooting at the MFC in Moscow
British military demanded $1.1 million for stuttering after Estonian frosts
Sasapost (Египет): американцы создают самый мощный лазер в истории. Что это значит?
Tank killer: the work of the PTKM-1R anti-roof mine was shown on video
Корпорация "Иркут" до конца 2018 года поставит ВКС РФ более 30 истребителей Су-30СМ
other topics discussed
2006-2021 © ВПК.name. All rights reserved.
When reprinting, link to ВПК.name required.
User agreement.
№ 21-PP in the register of information distributors.
18+
Website hosting: TimeWeb.