Protection from drones and Javelin: and The Drive appreciated the new armor of the T-80 tank 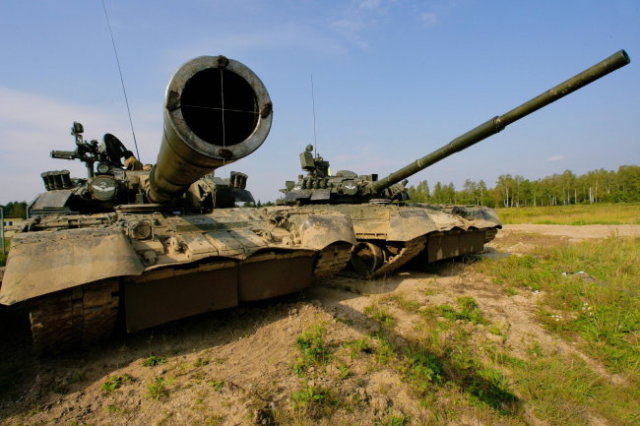 In occupied #Crimea, this #Russia |n tank is fitted with what looks like a type of slat armour over the turret specifically designed to protect against top down attack like the Javelin ATGM, which are now in use by #Ukraine ’s armed forces:

A video of a Russian T-80 in Crimea with an improvised protection of the tower in a visor or dome over the tower appeared on social networks. The Drive portal reacted to the tank with "fancy armor".

"Armor of this type has recently been increasingly appearing on Russian tanks and, apparently, is intended primarily to protect against attacks by barrage ammunition and other armed UAVs." - the author notes. "This decision, which is part of a broader trend to improve the protection of Russian tanks, may well have been inspired by the destruction caused by unmanned munitions during last year's conflict in Nagorno-Karabakh."

The journalist reads that the structures built into the towers of Russian tanks and resembling rack-and-pinion armor are clearly designed to provide protection from attacks from above. Although the armor shown in the video is one of the most common, it seems that there is no standardization of this concept yet. This suggests that this work, at least in part, is carried out on an experimental or improvised basis.

Some observers suggest that these screens mounted on top are a response to the threat posed by modern Javelin-type anti-tank guided missiles (ATGMs), although the main function is most likely to protect against ammunition launched by drones. In the case of Javelin, this may reduce the effectiveness of its tandem warhead, which is specifically designed to defeat explosive reactive armor (ERA). Even if the cell cannot completely stop a Javelin-type missile, it can reduce the probability of its defeat. Javelin is only one of the threats, there are other, less complex ATGMs, from which these crude installations can also provide some protection.

There is also more advanced protection of Russian tanks, including such systems as the "Curtain", which disables the laser designator and laser rangefinders that help to aim at the target of ATGM and other projectiles.

However, if plate armor, ERA and active protection systems have already been encountered before, then the cells on the roof of the tower are the newest. Moreover, the nature of these structures suggests that they were assembled at the subdivision level, on an extemporal basis, and not modeled. Some elements were not even painted. Despite its rudeness, the system looks quite effective.