Cosmonauts found new cracks in the Russian segment of the ISS 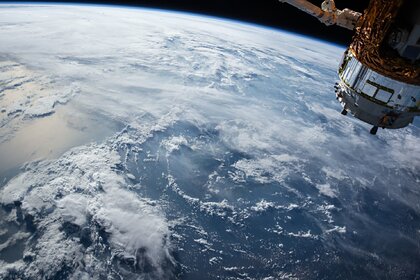 The cosmonauts found new non-penetrating cracks in the Russian segment of the International Space Station, they appeared on the oldest, the first of the Zarya module put into operation. This was announced by the general designer of the Rocket and Space Corporation (RSC) Energia, the head of the flight of the Russian segment of the ISS, twice hero of the USSR Vladimir Solovyov, RIA Novosti reports .

"Several such places with non-penetrating cracks were found in the Zarya module," Solovyov noted and added that he did not like the current situation.

The general designer noted that through cracks were already detected in the module, he did not rule out that over time, non-through damage will also begin to spread.

The hole in the ISS body was formed at the end of December 2020. An air leak in the Russian module at the station was discovered in September. In March, a continuation of air leaks was recorded in the Russian Zvezda module after sealing two cracks. For 11 and a half hours, the pressure in the chamber decreased by 52 millimeters.

On March 10, it was reported that [...] a new crack was found on the ISS. Cosmonaut Sergey Ryzhikov applied a second layer of sealant to it. At the same time, it was located near the pipeline of the heat supply system.

The rights to this material belong to Lenta.ru
The material is placed by the copyright holder in the public domain
Страны
Россия
Проекты
2020-й год
МКС
Do you want to leave a comment? Register and/or Log in
Log in via Facebook
The Permanent Representative of the Russian Federation to international organizations in Vienna Ulyanov called the refusal of AUKUS to provide data on the union abnormal
The United States agrees with Stoltenberg on the inadmissibility of Russia's influence in the issue of NATO expansion
In the USA, they were surprised by the size of the Su-75
The National Interest (США): российский танк Т-80 — это не шутка
Korean aircraft carrier "won back" funding
Шойгу счел необходимым построить в России еще несколько крупных городов
The State Duma appreciated the idea of banning the sale of grenades after the shooting at the MFC in Moscow
British military demanded $1.1 million for stuttering after Estonian frosts
Sasapost (Египет): американцы создают самый мощный лазер в истории. Что это значит?
Tank killer: the work of the PTKM-1R anti-roof mine was shown on video
Корпорация "Иркут" до конца 2018 года поставит ВКС РФ более 30 истребителей Су-30СМ
Как России зарабатывать больше на продаже вооружений
Putin signed the law on the powers of Roscosmos in the field of infrastructure construction
In the USA, they called the advantages of the Russian "Sun"
Американский эксперт назвал пять мощнейших российских танков
other topics discussed
2006-2021 © ВПК.name. All rights reserved.
When reprinting, link to ВПК.name required.
User agreement.
№ 21-PP in the register of information distributors.
18+
Website hosting: TimeWeb.