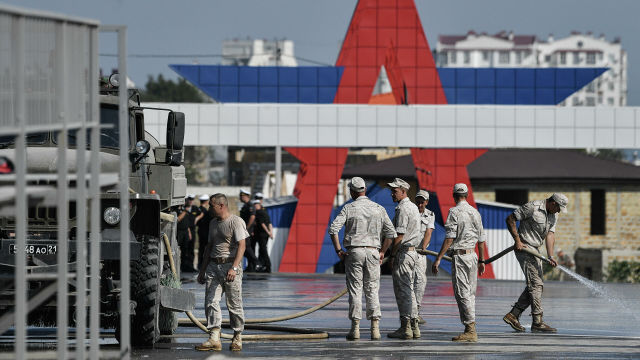 "The final stage of testing will be held in September, after which, we hope, the Navy command will conclude a contract for the serial production of these underwater vehicles," he said at the Army - 2021 forum.

The complex, consisting of an underwater robot for additional search of mines and several small disposable kamikaze devices, was named "Yantar". Umansky explained that the trawling group can clearly classify up to 85% of the detected objects as mine-like. In order to reclassify and, if necessary, destroy the remaining 15%, new drones will be used. After the group has passed and retreated to a safe distance, they will be released in the opposite direction.

The main device is equipped with a camera and three navigation complexes. In addition, in addition to the payload for destroying mines, it has a pyrezak for cutting minreps (cables that attach mines to anchors that hold them in one place).

As explained to RIA Novosti in the company "Idrobaltika" (the counterparty of the SNSZ), now the minesweepers are armed with the ISPUM device (an Intelligent system for searching and destroying mines). However, it is too big and heavy, and it can only move away from the ship by 300 meters. In addition, the speed of the ISPUM is three knots, that is, it cannot move if the current is faster. The Yantar spacecraft moves at a speed of up to six knots and departs from the vessel at a distance of up to 1.5 kilometers, while it can work at a depth of up to 300 meters.

A small remotely controlled vehicle, of which there will be several units on each minesweeper, carries a load weighing up to 14 kilograms - either a cumulative charge or a high-explosive one. If the device came to a given point and found that it was not actually a mine in front of it, it can be remotely brought into an inert state and pulled back to the minesweeper on a cable.

The Yantar system can be obtained both by new ships of the 12700 Alexandrite project, which will be built under a contract with the Ministry of Defense, and already built and accepted into the fleet.