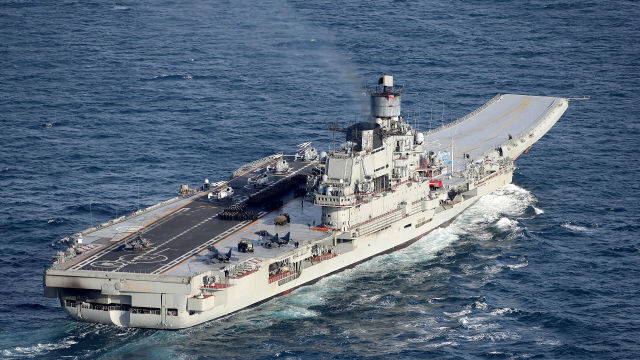 MOSCOW, May 18 — RIA Novosti. The Military-Industrial Commission of the Russian Federation, when preparing a new state armament program for 2024-2033, will assess the feasibility of including plans for the construction of a new aircraft carrier, Vladimir Pospelov, a member of the board of the Military-Industrial Commission of the Russian Federation, a member of the Naval Board under the government, said in an interview with RIA Novosti.

"In the near future, as part of the preparation of a new GPV (state armament program. - Ed.) it is necessary to assess the feasibility of creating aircraft carriers and their cost. In theory, the Navy needs three such ships — the main one and two serial ones. There is an advance design of the aircraft carrier, " Pospelov said.

According to him, Russia has many of the necessary technologies to create such a large ship, but some will need to be finalized

"There are also nuclear power plants of the necessary capacity, which will provide the appropriate speed. But several basic elements of the future aircraft carrier need to be brought to mind, including the take-off and landing systems of aircraft. In addition, we must create a promising deck-based ship-based fighter capable of carrying the necessary amount of weapons, " Pospelov said.

Now I have only one ship of this class in the Russian Navy — the heavy aircraft carrier Admiral Kuznetsov of the Fleet of the Soviet Union. The ship was commissioned in 1991, during the Soviet era. While it is under repair. After the upgrade, it will be able to serve the fleet for another 20 years.

The length of the deck of the Russian aircraft carrier is 306 meters, the width is 75 meters, the displacement of the ship is 60 thousand tons, the maximum cruising range is 8,417 miles (more than 15 thousand kilometers). The crew consists of 1,960 men, including 518 officers and 210 midshipmen.

The full-time wing of the aircraft carrier Admiral Kuznetsov consists of Su-33 and Su-25 carrier-based aircraft, as well as Ka-27/Ka29 helicopters. A new air group consisting of MiG-29K fighters and Ka-52K helicopters was being tested on the ship.

The rights to this material belong to РИА Новости
The material is placed by the copyright holder in the public domain
Страны
Россия
Продукция
Адмирал Кузнецов
Гранит
Ка-27
Ка-52
Кинжал ЗРК
Кортик
МиГ-29К
Су-25
Су-33
Компании
ВПК РФ
Проекты
1143 Кречет
Авианосец
Ядерный щит
ЯЭУ
Do you want to leave a comment? Register and/or Log in
Log in via Facebook
The Permanent Representative of the Russian Federation to international organizations in Vienna Ulyanov called the refusal of AUKUS to provide data on the union abnormal
The United States agrees with Stoltenberg on the inadmissibility of Russia's influence in the issue of NATO expansion
In the USA, they were surprised by the size of the Su-75
In the USA, it was proposed to ban "Solntsepeki" and "Pinocchio"
Putin signed the law on the powers of Roscosmos in the field of infrastructure construction
Korean aircraft carrier "won back" funding
Конфликты: Йемен - "забытая" война
The National Interest (США): российский танк Т-80 — это не шутка
Russia will offer India the technology of the Octopus tank
Шойгу счел необходимым построить в России еще несколько крупных городов
The State Duma appreciated the idea of banning the sale of grenades after the shooting at the MFC in Moscow
British military demanded $1.1 million for stuttering after Estonian frosts
Sasapost (Египет): американцы создают самый мощный лазер в истории. Что это значит?
Tank killer: the work of the PTKM-1R anti-roof mine was shown on video
Корпорация "Иркут" до конца 2018 года поставит ВКС РФ более 30 истребителей Су-30СМ
other topics discussed
2006-2021 © ВПК.name. All rights reserved.
When reprinting, link to ВПК.name required.
User agreement.
№ 21-PP in the register of information distributors.
18+
Website hosting: TimeWeb.