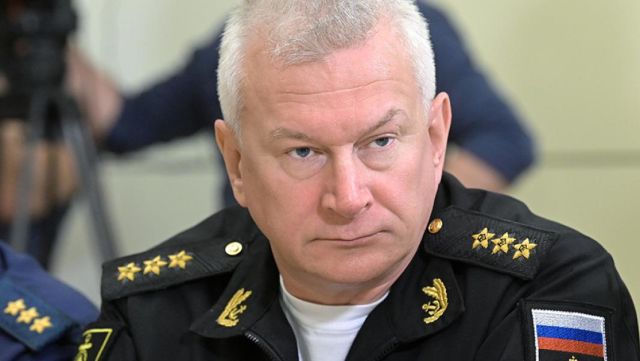 TSAMTO, December 7. The chief of the Russian Navy Admiral Nikolai Evmenov the workshop in the Admiralty heard the report of the Deputy commander of the Navy Vice-Admiral Vladimir Kasatonov on the audit of a number of structural units of the Navy in the Krasnodar region and the Crimea.

Earlier on the orders of the commander of the Navy working group of officers of the Main command of the Navy, headed by Deputy Navy commander Vice-Admiral Vladimir Kasatonov made a working trip to Yeysk, where he checked training facilities of the Center for combat use and retraining of pilots of Naval aviation of the Navy and, at the direction of Admiral Nikolai Evmenov, took part in the opening of a new training complex for training naval pilots. The complex is a state-of-the-art system of simulators and units for full-fledged training of flight and engineering personnel of fighter, anti-submarine and carrier-based aircraft of the Russian Navy. Six specialized classes are equipped for training naval pilots, dynamic simulators of Ka-27M, Ka-29 and Ka-52K helicopters are installed, as well as a complex simulator of the su-30SM multi-purpose fighter. A special feature of the su-30SM simulator is the use of artificial intelligence tools to form an external visual environment system in order to solve the entire complex of tasks related to piloting and combat use of the aircraft in the full range of heights and speeds.

High-tech aircraft and helicopter simulators located in the building of the training complex allow you to work out the entire range of flight tasks as realistically as possible, including anti-submarine tasks, to work out the use of aviation weapons, simulating any failures of aviation equipment, weather and tactical conditions.

Also, in accordance with the instructions of the commander-in-chief of the Russian Navy, Admiral Nikolai Evmenov, during the working trip, the group of the Main command of the Navy checked in Sevastopol the progress of construction of the infrastructure of the new Training center for military rescuers and diving specialists of the Navy (joint training center of the Navy), readiness for the new training period of the command of the Crimean naval base, combat training of The marine aviation unit stationed in Saki, organization of planned combat training of the Marines and surface forces of the black sea fleet.

During the inspection of the connection of surface ships of the black sea fleet, Vice Admiral Vladimir Kasatonov and members of the working group of the Main command of the Navy on Board the flagship of the black sea fleet, the guard missile cruiser "Moscow", heard a report from the commander of the connection, captain 1st rank Sergey Tronev, on maintaining weapons and military equipment at the proper level, and quality parameters of the organization of combat training.

According to the results of the report on the results of the working visit of the group of the General command of the Navy in Krasnodar Krai on the black sea fleet, Russian Navy commander Admiral Nikolai Evmenov said that "the Main command of the Russian Navy will continue to give priority attention to improving the organization of combat training of the forces of the black sea fleet combat training by the black sea, maintaining a high level of technical readiness of armament and technical equipment of units and formations stationed in the Krasnodar Krai and Crimea", – informs the information management unit of the Navy.