In the UK, they declared the superiority of China over Russia in fighter jets 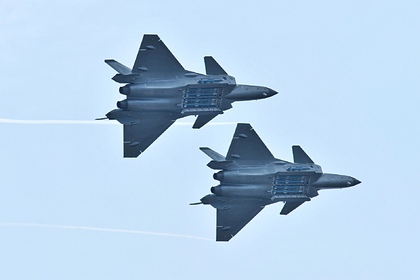 China surpasses Russia in aviation technology, according to a report by the Royal United Institute of defense research. FlightGlobal drew Attention to the relevant material of the British analytical organization, prepared by researcher Justin Bronk.

"The Royal United Institute of defense research has concluded that China is moving confidently to Eclipse Russia in the field of combat aircraft," the newspaper writes.

The Institute noted that " Russia and China are moving along different trajectories in the development of fighter aircraft, with China leading in areas such as sensors, data channels, weapons and stealth technologies." "The only area where Russia retains an advantage over China is aircraft engines," the document says.

Analysts also believe that the Russian industry is unlikely to be able to restore previously lost competitive advantages due to " deep structural industrial and budgetary shortcomings compared to the Chinese sector."

The Chinese Chengdu J-20 can be considered the only competitor to the American Lockheed Martin f-22 Raptor and F-35 Lightning II stealth fighters. "The J-20 family will be produced by the hundreds over the next decade, which is the main existing air threat to Western air superiority fighters," the report says.

The Russian su-57 does not have sufficient stealth characteristics and has not yet been adopted, analysts say. In addition, Russia may start importing Chinese sensor and missile technologies in the 2020s. The latter is called a threat to NATO.

In August, analysts Ryan Bauer and Peter Wilson, in an article for the American research organization RAND , declared the su-57 a fourth-generation fighter that faced "numerous problems and failures."

In July, the publication of the Chinese portal Global Times named the fifth-generation fighters as the American F-22 Raptor and F-35 Lightning II, as well as the Chinese J-20, but not the Russian su-57. An international-oriented publication supervised by the Central Committee of the Communist party of China, referring to a publication in the journal Acta Aeronautica et Astronautica Sinica, cited the corresponding opinion of Yang Wei, Deputy Director for science and technology of the Aviation Industry Corporation of China (AVIC), General designer of the J-20.

In December 2019, in a publication on the Chinese portal Sohu, the Russian su-57 was declared a 4+ + + generation fighter (3+++ in the Chinese version). It also said that " the Russians need to work harder so that they are not left behind by other countries of the world."

This is how China reacted to the crash of the su-57, which was supposed to be the first Russian production model of the fifth-generation fighter, that occurred in the same month.

The rights to this material belong to Lenta.ru
The material is placed by the copyright holder in the public domain
Страны
Великобритания
Китай
Россия
США
Продукция
F-22
F-35
J-20
ПАК ФА
Компании
AVIC
Lockheed-Martin
Проекты
NATO
Истребитель 5 поколения
Do you want to leave a comment? Register and/or Log in
Log in via Facebook
In the USA, they were surprised by the size of the Su-75
Шойгу счел необходимым построить в России еще несколько крупных городов
Россия получит авиационное преимущество над ЕС и США
Ukraine has upgraded the commander's tank
The Ministry of Defense of the Russian Federation is preparing to adopt a new "Shell" and a fighter drone "Derivation"
Russia has collected archival information about the service and life of all generals from 1917 to 2020
Так ли все плохо с Тихоокеанским флотом
How to return the US fear of Russian Naval aviation
«Концепция сетецентрической войны родилась в СССР, а развитие получила в США"
French special forces are preparing to fly on "jet skates"
США оставили биологическое оружие Талибану
The Permanent Representative of the Russian Federation to international organizations in Vienna Ulyanov called the refusal of AUKUS to provide data on the union abnormal
The United States admitted that they dropped the fuel tank from the F-16 aircraft on a Japanese village due to an emergency situation
«Бастион» для «Циркона». Куда приземлят гиперзвуковую ракету
Доездился: Илону Маску грозит финансовый крах
other topics discussed
2006-2021 © ВПК.name. All rights reserved.
When reprinting, link to ВПК.name required.
User agreement.
№ 21-PP in the register of information distributors.
18+
Website hosting: TimeWeb.