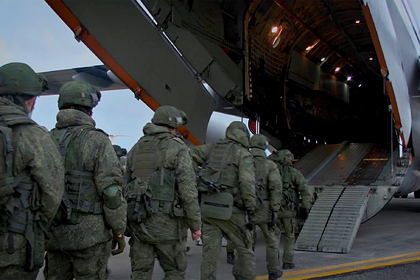 The peacekeeping operation in Nagorno-Karabakh, which was agreed upon by the leaders of Russia, Armenia and Azerbaijan, involves a brigade created on the basis of the Ulyanovsk airborne assault brigade (VDV). The armament of military personnel was revealed by Moskovsky Komsomolets.

The number of the brigade is two thousand people, and only contract servicemen will go to Karabakh. During combat training, special attention is paid to training in military operations as part of a collective peacekeeping force. everyone is required to speak English.

The Ulyanovsk brigade is armed with the most modern weapons and equipment. Several years ago, paratroopers received sets of combat equipment 6B52 "Ratnik". Since 2017, the brigade has switched to BMD-4M amphibious assault vehicles and BTR-MDM "Rakushka" armored personnel carriers. The BMD-4M is armed with the Bakhcha-U combat module with a 100 mm cannon, a 2A70 launcher, and a 2A72 30 mm automatic cannon. A PKT-M machine gun is also mounted on the vehicle.

The combat module is equipped with an automatic fire control system and a weapon stabilization system in two planes, which allows you to conduct targeted fire on the move. A thermal imager, a night vision sight, a laser rangefinder, and target tracking devices are also installed.

The BTR-MDM is armed with a remote Autonomous machine gun mount, a course machine gun mount with a range of up to two thousand meters. It is designed to transport troops, ammunition, spare parts and fuel and lubricants. It is used in different climatic conditions.

The Ulyanovsk brigade also received modern electronic warfare (EW) equipment that protects personnel, suppresses enemy radio communication lines in the ultra-short-wave frequency range, and masks the most important objects with an aerosol curtain. The team also has multifunctional unmanned systems "Orlan-10". They provide real-time aerial reconnaissance for maximum ranges of up to 120 kilometers.

On the morning of November 10 , the first Il-76 planes with Russian peacekeepers flew to Nagorno-Karabakh. Together with the military personnel, armored personnel carriers and vehicles are being transferred to the conflict zone.

Earlier, Armenia, Azerbaijan and Russia signed a statement on the cessation of hostilities in Karabakh. According to the document, the Armenian and Azerbaijani forces remain in their positions, and the region includes peacekeepers from the Russian Federation. Until December 1, territories in four districts-Gazakh, Aghdam, Kelbajar and Lachin-will be returned to Baku's control. At the same time, Armenia still has a corridor for communication with Karabakh.