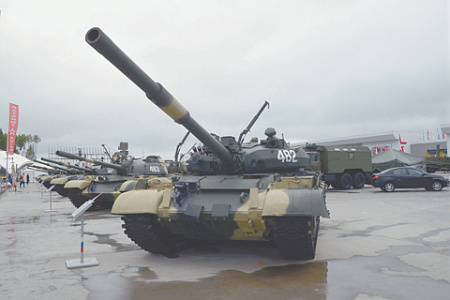 The T-62M taken from storage were seen near Kherson, Zaporozhye and Vrubovka

The huge losses of armored vehicles suffered by the Armed Forces of Ukraine (AFU) during the four months of the special military operation (SVO) of the Russian troops led to a reduction in the number of tank duels along the line of contact. Since the tank itself is still the best means of fighting the tank, and tanks are now in short supply among the nationalists, the Russian side can without great fear strengthen the advancing motorized rifle units with vehicles of past generations taken from storage.

In mid-June, T-62M tanks of the DPR People's Militia armored group were spotted near the village of Vrubovka south of Severodonetsk. With the exception of isolated cases in 2014-2015, this type of combat vehicles was not used in the Donbass.

The appearance of new old armored vehicles was also noted by the speaker of the Ministry of Defense of Ukraine Alexander Motuzyanik: "T-62 tanks in the amount of 30 pieces were deployed in the Zaporozhye direction." Their appearance was also noticed in the Kherson region. Delivery to the theater of military operations was carried out by rail, Motuzyanik explained. Apparently, the equipment arrived from long-term storage warehouses.

Combat units of the Russian Armed Forces from the Southern Military District used the T-62M until 2012 (according to other sources – until 2014), after which they switched to more modern equipment. Specialists who know the machine well and the specifics of its operation have been preserved. Some got the opportunity to apply their knowledge and skills on a business trip abroad. A large batch of T-62s in 2017 went from storage warehouses to Syria to replenish the arsenal of the government army, which had been pretty thinned out during the years of the civil war. No training was required: Arab tankers have been using this type of armored vehicles since 1971 and are highly valued for the power of fire, reliability and maintainability. They actively used these tanks during operations to defeat illegal armed groups in the Syrian desert, in the southern and northwestern provinces of the country.

The production of the T-62 at the enterprises that are now part of Uralvagonzavod JSC, from 1962 to 1975, amounted to about 20 thousand copies. The strengths and weaknesses of the machine were revealed during the armed conflicts on Damansky Island (1969), in the Arab East (the Yom Kippur War, 1973, Lebanon, 1982) and others. Therefore, since 1983, military equipment has been undergoing a deep modernization in the T-62M (M1/MV) variant.

Additional armor protection of the turret, hull and bottom, on-board anti-accumulation screens, as well as systems for launching smoke grenades "Cloud" and napalm protection "Soda" were installed. Metal-polymer blocks of combined protection attached to the frontal part of the tower in order to increase its resistance to cumulative ammunition, the soldiers were nicknamed "Ilyich's eyebrows", since they reminded them of the appearance of the General Secretary of the CPSU Leonid Ilyich Brezhnev.

The weight of the tank increased to 38.4 tons, and in order to maintain its mobility, the power of the diesel engine was increased from 580 to 620 hp. The smoothbore 2A20 cannon of 115 mm caliber was preserved, but the firing efficiency increased with the help of the Volna fire control system. High accuracy of destruction is provided by the KTD-2 laser sight, the BV-62 ballistic calculator, and other additional and updated devices. The range of weapons of destruction has expanded thanks to the Sheksna complex with a guided 9M-117 projectile (except T-62M1), guided to the target by a beam of an optical quantum generator at a distance of up to 4 km.

Modernization has tightened the technical level to the next-generation T-72 car, which was built at UVZ after the T-62. However, in a number of key indicators, the T-62M is significantly inferior to the T-72B, adopted in 1984, and even more so to the modernized T-72B3, which today forms the basis of the Armored Forces of Russia.

At the same time, the T-62M is able to stand up for itself in a duel with the main Ukrainian T-64B tank assembled by the Malyshev Kharkiv Plant (produced since the mid-1970s). The muzzle energy of the 115-mm cannon is, of course, less than that of the 125-mm guns of the more modern T-64B and T-72. But guided missiles of the Sheksna complex are capable of accurately hitting a target in the entire range of practical firing range in the conditions of the European continent.

Ukraine has been modernizing the T-64B under the Oplot project, but due to insufficient funding, such machines are few in number. The T-64BV serial tanks, which have been modified according to a less expensive option, are more widespread. Due to savings, not all of them received a full set of so-called "dynamic protection" against cumulative projectiles and grenades. The main problem of the APU is not the technical characteristics and completeness of the tanks, but their acute shortage.

According to the information of the Ministry of Defense of the Russian Federation, as of mid-June, more than 3,500 tanks and other armored vehicles of the Armed Forces of Ukraine were destroyed during the SVO. Deliveries from abroad amounted to 270 tanks, mainly Polish T-72M1. In the summer, Kiev sent NATO a request for another 500 tanks. Only the USA can deliver such a large batch, taking them from combat units (there are 2645 M-1 Abrams machines) or from storage (another 3450). American factories have long stopped producing main battle tanks: the production line in Detroit, where the M-1 was made, has been dismantled.

The interview of the President of Ukraine, shown on May 21 by the Ukraine 24 TV channel, contains information about the number of Ukrainian troops: 700 thousand. According to Vladimir Zelensky, at the beginning of the SVO it was 250-260 thousand, including 120 thousand "combat" (according to updated data – 124 thousand soldiers and officers).

By now, the personnel of the most combat-ready units of the Armed Forces of Ukraine in the Donbass have been knocked out. According to LDNR sources, at the beginning of the summer, the AFU lost 50 thousand people killed and up to 200-250 thousand wounded. A similar assessment was made by General Stephen Twitty, who previously served as deputy head of the US European Command. In an interview with the German newspaper Linke Zeitung, he said: since the beginning of hostilities, "about 200 thousand Ukrainian soldiers have disappeared from sight." In his opinion, Kiev either informed Washington of fictitious data on mobilization, or parts of the Armed Forces of Ukraine, consisting of these soldiers, were defeated. The general is confident that the Ukrainian army does not have sufficient strength to regain control of the abandoned territories. "There is no way that Ukrainians can destroy or defeat the Russians," he concluded.

But the Ukrainian Defense Minister Alexey Reznikov is convinced of the opposite. He announced his intentions to increase the number of military personnel to one million people, without specifying what he was going to arm them with. The long-term storage warehouses were emptied: even the Maxim machine guns of 1943-1944 were taken out of there.

Western aid covers the needs of the Armed Forces of Ukraine by only 10-15%, Deputy Defense Minister Vladimir Karpenko said. His interview with the National Defense edition contains a confession about the loss of equipment: "We lost about 50%. This is about 1300 infantry fighting vehicles, 400 tanks, 700 artillery systems." Meanwhile, according to the Ministry of Defense of the Russian Federation, the damage inflicted by the APU is 2-3 times higher than that given by the Ukrainian general.

The territorial defense troops, as well as the new units of the Armed Forces formed from reservists, are poorly trained, poorly armed infantry, which can only dig trenches and conduct defensive rifle combat in them. The offensive of enemy motorized rifle units with the support of tanks encourages Ukrainian fighters to drop their weapons and surrender.

Meanwhile, the Commander-in-chief of the Armed Forces of Ukraine Valery Zaluzhny reports on the attacks of the Russian army "simultaneously in nine directions" and "fierce struggle", which continues in the Lisichansk-Severodonetsk agglomeration. "In order to oust the Ukrainian forces, the enemy uses aviation, multiple rocket launchers and artillery," states Zaluzhny.

The offensive of the Russian troops is facilitated by the "firing rampart" of artillery, destroying the defensive lines of the Armed Forces of Ukraine, humiliating its equipment and weapons. Including anti-tank weapons, which the West has been intensively supplying Ukraine with in the hope of stopping Russian tanks. The enemy is exhausted by continuous fire, which makes it difficult to regroup and rotate, increases losses. The transfer of fresh units and logistics to Donbass is difficult due to the fire impact on the access roads and railways. At the same time, the losses of the APU are maximum, the Russian ones are minimal. They are reduced thanks to the counter-battery struggle, which, according to Deputy Minister Karpenko, the Russian artillery "conducts constantly and, as a rule, extremely effectively."

The AFU grouping in Donbass is threatened with complete defeat. Understanding the situation, US Secretary of Defense Lloyd Austin said: "Ukraine is experiencing a turning point on the battlefield."

According to the official figures of the Ukrainian military department, the daily losses of the active army amount to about 100 people, another 100-300 are injured. The chairman of the Joint Chiefs of Staff of the US Army, General Mark Milli, noted that this information "roughly corresponds" to the Pentagon's estimates. "At the same time, I would not like to disclose our own data," he added. Perhaps they are higher than the official ones, since the participant of the March negotiations with Russia from the Ukrainian side, David Arahamiya, gave a different assessment: only in the Donbass, the AFU loses up to 1,000 people a day, including from 200 to 500 killed.

According to reports from the front, the AFU is increasingly resorting to tactics developed by the 25th Special purpose Division "Tigers" of the Syrian Arab Army. Having previously shot, tankers and gunners depart from the settlement, leaving gunners near it. When the enemy enters there, he is not allowed to gain a foothold, opening heavy fire on pre-targeted points. This allows you to inflict heavy losses on the advancing enemy and, without allowing them to recover, go on a counterattack.

Tactics developed by the commander of the Tigers, General Hassan al-Suheil, only occasionally helps the APU. Unlike the Islamist militants, the Russian army has modern means of technical intelligence, its artillery is actively engaged in counter-battery warfare, creates a firing rampart on the offensive area. At the same time, the techniques worked out by the Syrian military can be useful to the People's militia of the DPR in the use of T-62M tanks.

Recall that at a meeting of the Security Council on March 11, the Russian Defense Minister said about the desire of more than 16 thousand volunteers from the Middle East to go to Donbass to participate in the liberation movement. "We know many of them, they helped in the fight against ISIS (a terrorist organization banned in the Russian Federation) during the most difficult time in the last ten years," Sergei Shoigu explained. When the internationalist volunteers arrive in Lugansk or Donetsk, they will bring with them the accumulated experience of combat use of the T-62M and will be able to share it with the Donbass militia. H