The aviation industry was ordered to "Tu-Tu" 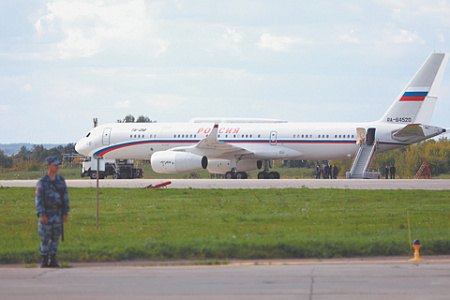 Having coped with the task set by the Ministry of Defense of the Russian Federation to resume serial production of the world's largest combat aircraft, the Tu–160 strategic missile carrier, the Kazan Aviation Production Association named after S.P. Gorbunov (KAPO) undertakes the next similar project - the restart of production of the Tu–214 mainline liner. According to the plans announced in April, aircraft manufacturers will provide 70 such machines by 2030. In case of successful implementation of these programs, together with others for the repair and modernization of the Tu brand aircraft previously assembled in Kazan, KAPO will become a leader among all aircraft factories within the United Aircraft Corporation (UAC).

The Tu-214 was developed by the Moscow Experimental Design Bureau named after Andrey Nikolaevich Tupolev as a long-range (+500 km) modification of the basic Tu-204, which made its first flight in 1989. In December 2000, the Tu-214 (another designation – Tu-204–200) received a type certificate authorizing the transportation of 212 passengers on air lines with a length of 4800 km.

The UAC considers this topic to be a civilian one, but it is more correct to talk about it as a dual-use product. The base platform is used by a number of military modifications, including: The Tu-214SR repeater aircraft, the Tu-214R radar reconnaissance aircraft, the Tu-214ON Open Sky program inspector, and others. Therefore, the resumption of production of this type is in the interests of not only the Ministry of Transport, but also law enforcement agencies.

Restarting, after a break, the production of equipment developed in Soviet times is becoming a steady trend. The first major project was the military transport IL-76, previously produced in Tashkent, and now in Ulyanovsk. The incentive to continue the list is the introduction by the collective West of the next packages of "infernal" economic sanctions against Russia. We are finally blocked from supplying not only the final products (including airliners and engines for them), but also various kinds of components and construction materials. And without them, it is impossible to produce many types of sophisticated modern equipment in our own country.

In order to prevent a complete shutdown of production, AvtoVAZ puts the VAZ-2121 (or rather, its slightly updated version of the LADA 4x4 Niva Legend), KAMAZ trucks of the K3 series (upgraded cars of the 1976 model) with domestic V8 turbodiesels (instead of Cummins), manual transmissions (instead of ZF automata) and fuel cell elements back on the conveyor hardware (instead of Bosch).

The most annoying thing is that due to the refusal of the collective West to fulfill the obligations previously assumed by its suppliers and manufacturers, we have to suspend the production of more advanced products of domestic development. Either to postpone the series to a later date, when, perhaps, Chinese components or their own analogues obtained under the import substitution program will become available.

Many Russian factories hold daily "anti-sanctions" meetings. Purchasing departments, engineers and management specify which components will have to be abandoned, where to look for a replacement for the missing nomenclature. In parallel, there is a search and evaluation of documentation and equipment for previously manufactured products with the intention of putting them back into operation.

While the industry is looking for ways to continue the production of new and old products, operating organizations are taking inventory with a reassessment of material values. The airline "Siberia" (S7 Airlines) plans to remove the status of "monument aircraft" from the IL-86 airbus with registration number RA-86097, received in 2015. The car is parked on the forecourt of Tolmachevo Airport, serving Novosibirsk. Vladislav Filev, the head of the airline, explained to reporters: "The IL-86 is a fairly new car, it was built in 1988. Moreover, it has not been operated for the last 9 years, but stood as a monument to Soviet aviation at the airport. So he still has a decent resource, we can quickly prepare for work, he will fly for another 6-8 years, then we will replace him with something."

Sibir expects to put IL-86 on flights from Novosibirsk to Moscow and St. Petersburg. The re-commissioning of the wide-body airliner, decommissioned in 2008 with the prospect of conversion into a museum, will be a landmark event for domestic aviation. Perhaps the military will contribute to this case: they continue to operate the IL-86 in the "air command post" variant. This means that the NK-86 backup engines, elements of avionics equipment, other consumables and spare parts are still stored in the warehouses of the Ministry of Defense of the Russian Federation.

The Ministry of Defense of the Russian Federation also continues to operate the Tu-134 and Tu-154 in the usual factory configuration for the transportation of personnel, as well as special variants of the Tu-134UBL. The Perm Engine Plant is repairing the D-30 III series engines used on it, including using newly manufactured parts. Potentially, this opens the way for airlines to restore the airworthiness of Tu-134 and Tu-154 left at distant airfield parking lots.

State structures, including the Ministry of Defense of the Russian Federation and the Special Flight Detachment (SLO), have dozens of Il-18, Yak-40, Yak-42, Tu-204, Tu-214 and Il-96 aircraft on the balance. Some are in active operation, the rest are in storage. If airlines have an acute shortage of carrying capacity, some number of cars may be transferred to them.

This is especially important for maintaining air traffic on international routes, which until recently were serviced by airbuses and Boeing leased from foreign leasing companies. There are already cases of arrests of such aircraft abroad, where they ended up performing international flights of Russian airlines. According to the calculations of the Minister of Transport Vitaly Saveliev, at the end of March their number was 78, which is about 10% of the domestic fleet of mainline airliners.

To fulfill all the requirements of Western lessors means to halve the carrying capacity of domestic air transport. After all, they require the return of a total of 500 aircraft. Rostec promises to deliver so many domestic vehicles (MS-21, SSJ, IL-114, Il-96 and Tu-214) in the period up to 2030. In short, the process of replacing foreign–made aircraft is not fast, it will require huge efforts.

It is still unclear how long the collective West will pursue a policy of sanctions. "I propose to proceed from the fact that there will be no previous interaction with former partners in the near future," Vladimir Putin said on March 31 at a meeting on the development of air transportation and aircraft construction.

However, the next month brought some signs of relaxation. The European Union allowed to transfer to Russia the planes that are in financial leasing (and there are up to hundreds of them, the rest are in operational), after full payment of the remaining cost. Speaking at a meeting of the Federation Council, the Minister of Transport estimated the volume of the buyout in the amount of $ 20 billion. Airlines do not have such a sum, and they can no longer get loans from Western banks (it is prohibited). Russian financial institutions are in no hurry to help. The only way is to allocate appropriate allocations from the state budget.

However, $20 billion is a huge amount that is better spent on domestic projects. Having bought out Western aircraft, we do not receive manufacturer's guarantees about uninterrupted operation. The network of repair plants and technical bases deployed in the country does not completely cover all types of major repairs in terms of electronic equipment and power plants. In a word, the "airbuses" and "Boeing" bought by us can, after flying a little, become a joke due to the lack of qualified repairs and spare parts.

Sometimes you can hear the opinion that we will be able to purchase the parts necessary for repair through third countries, from intermediaries. This is naive reasoning. The logistics system of modern types of aircraft is built in such a way that all important components are numbered. Information about them is entered into the manufacturer's database, with which the aircraft interacts via communication channels built into its onboard equipment complex. This ensures self-diagnosis and automatic generation of signals to search for an analog of a failed element in available warehouses. At the same time, it is very problematic to repair the Boeing without obtaining the appropriate permission from the manufacturer, and in the case of major repairs, it is impossible.

Instead of buying out foreign aircraft, we should think about a more reasonable, rational spending of funds. The first step is to organize the completion of a dozen Tu–204s, work on which was suspended at the Ulyanovsk Aviation Plant.

The second is to restore the airworthiness of aircraft in storage with state and commercial structures. Dozens of "carcasses", "silts" and "yaks" with a large residual resource are idle at airfields of the aviation industry and the Ministry of Defense of the Russian Federation.

In both cases, it will take less time than waiting for a completely new Tu-214 from KAPO. The production cycle of such equipment from scratch is at least three years, even if there is an existing assembly line and production of all components at the factories of the domestic industry.

Of course, a unified program for the completion of the Tu-204 in Ulyanovsk, the assembly of new Tu-214 in Kazan, the restoration of previously built aircraft of this family is very necessary. It should be comprehensive, not limited to production on the CAPO. Statesmen should remember that the director's corps of the aviation industry is only interested in the release of new equipment, and then – "grass does not grow." This is an old problem of the domestic aviation industry, alienating buyers, especially commercial airlines.

What is more important to the state: the social task of maintaining jobs in the aviation industry or ensuring uninterrupted air traffic between the key cities of our vast country? There may be different opinions on this score. The President of Russia at a meeting on March 31 said: "First of all, we need to support our airlines in order to maintain their steady, rhythmic work, the employment of specialists, and ensure the availability of air transportation for Russian citizens."

The release of the Tu-214 at the promised pace of ten cars annually will help operating organizations to survive a difficult stage until more modern MS-21 machines become available. With a close dimension, they have a 25-30% lower fuel consumption per passenger. But this advantage is weakened by twice the initial cost. Worse, the cheerful reports on the full readiness of the MS-21 for a major series in fact give wishful thinking. The plane, of course, is needed, but constant delays for various reasons acquire symptoms of a chronic disease. Among the reasons is too many Western suppliers invited to participate in the program at the initial stage. Since 2014, some of their services have been abandoned, but it is still problematic to completely replace imported components with domestic ones.