Russian helicopter "Alpinist" made a circular flight for the first time 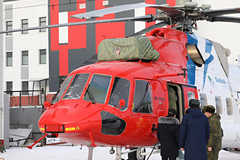 Tests of the upgraded Ka-226T light helicopter, which received the working name "Mountaineer", are continuing in Russia. As part of the tests, the car made a circular flight for the first time, Lenta was informed.ru" in the Russian Helicopters holding.

The helicopter spent 12 minutes in the air. The Ka-226T made a circular flight on the basis of the flight test complex of the National Helicopter Building Center "Miles and Kamov" of the Russian Helicopters holding. The "climber" was flying at a speed of about 100 kilometers per hour at an altitude of up to 300 meters.

Previously, the chief designer of the VK-650V engine "ODK-Klimov" (part of the United Engine Corporation of Rostec State Corporation) Anastasia Solovyova said that the Ka-226T will receive a Russian power unit. In 2023, the new engine will be tested on the Ka-226T. Now the helicopter uses French Arrius 2G1 gas turbine engines.

In November, the Ka-226T made its first flight in hover mode. The car was lifted into the air on the basis of the flight test complex of the National Helicopter Building Center "Miles and Kamov".

The upgraded helicopter is adapted for flights in the highlands, so the Ka-226T received the working name "Climber" (Climber). The car differs from the base model with a new airframe and fuselage design. The Ka-226 body is made using lightweight materials. Also, the "Climber" received a new main rotor column, blades and a main gearbox.