In the USA, they called the advantages of the Russian "Sun" 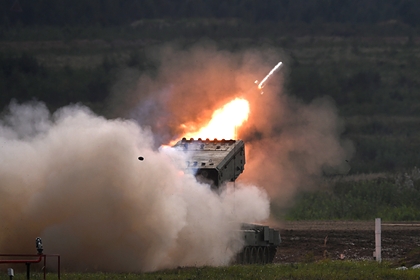 Eastwood noted that "Solntsepek" and "Pinocchio" use shells with a thermobaric composition. The impact of the flamethrower system leads to the formation of a combustible cloud that can penetrate into shelters. Also, the TOS-1 and TOS-1A differ in mobility, which is caused by the use of a tank chassis.

The publication 19FortyFive emphasized that heavy flamethrower systems received a fire control system with a ballistic computer and a laser rangefinder. After entering the firing position, the crew needs 90 seconds to prepare for firing.

In October, Eastwood wrote about the need to create regulations to ban the use of heavy flamethrower systems. In the material for 19FortyFive, he noted that the TOS-1 "Pinocchio" system can receive target data using a drone.

In September, the publication The National Interest noted the capabilities of the Tosochka heavy flamethrower system TOS-2. Columnist Sebastien Roblin said that the Russian system could become a threat to US tanks.

The rights to this material belong to Lenta.ru
The material is placed by the copyright holder in the public domain
Страны
Россия
США
Продукция
Солнцепёк
ТОС-1
Проекты
БПЛА
Comments [1]
№1