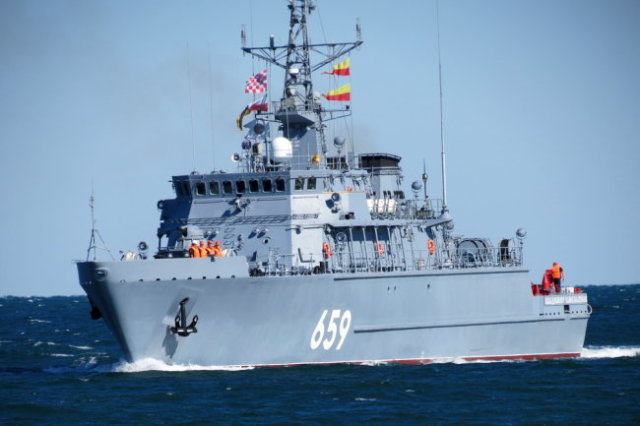 The newest mine defense ship "Vladimir Yemelyanov" under the command of Lieutenant Commander Denis Gainutdinov has completed the inter-fleet transition to the permanent base point - Sevastopol-from the Baltic Fleet. A decent meeting was prepared for him at his native pier. The crew, which consists exclusively of contractors, was met with an orchestra, bread and salt and a fried pig.

The solemn ceremony of the ship's admission to the fleet was held on December 29, 2019 in the city of Baltiysk. And now he has changed his temporary Baltic residence permit to a permanent, Black Sea one. After circumnavigating Europe, passing several seas and part of the Atlantic Ocean, the ship left 5,672 miles astern. And in total, taking into account the transitions, sea trials and state tests, participation in the two main naval parades, he has already measured about 15,000 miles.

The commander of the Crimean Naval Base (KVMB), Rear Admiral Felix Menkov, congratulated the sailors on the successful completion of the tests.

- You are waiting for a busy Black Sea weekdays, the ship will be in demand for 100 percent, - Menkov promised the crew.

The second mine defense ship of the project has already joined the Red Banner Brigade of ships protecting the water area of the Black Sea Fleet .12700.. The first of them, "Ivan Antonov", managed to go to the Mediterranean Sea, where he successfully worked out the tasks of mine reconnaissance, overcoming minefields and using shipboard weapons when repelling an airstrike of a conditional enemy.

The ship of the project "12700" has a unique, the world's largest "non-magnetic" hull made of monolithic fiberglass, formed by vacuum infusion. Its advantage is higher strength in comparison with steel hulls, which provides greater survivability of the ship when searching for mines. The service life of such a case is longer than that of a case made of low - magnetic steel, and the weight is much less.

- For the search and destruction of mines on board there is a system "Diamond", which includes two light boats with special underwater robots, - says the commander of the Red Banner brigade of ships of the protection of the water area (OVR), captain of the 1st rank Vladimir Korobkov. - Thanks to the plastic hull and low-noise engine of the boats, sea mines do not react to them. And this allows the crew to safely conduct a search using sonar and magnetometers.

The integrated system of search and destruction of mines "Alexandrit-ISPUM"is responsible for the detection of deep-water objects. It includes a remote-controlled underwater vehicle capable of detecting suspicious objects in a large radius. The equipment can work under water with sea waves up to three points.

After detecting dangerous objects, underwater drones are launched, which install explosive charges on them. If necessary, they can tow the ammunition to shallow water and destroy it there. Remote mine clearance tactics reduce the risk to personnel to a minimum.

Soon, the third Georgy Kurbatov will be added to the two mine - fighting ships of the 12700 project, which have already become part of the Black Sea Fleet.

The rights to this material belong to Российская газета
The material is placed by the copyright holder in the public domain
Продукция
Владимир Емельянов
Георгий Курбатов
Иван Антонов
Проекты
БФ
пр. 12700
Робот
ЧФ
Do you want to leave a comment? Register and/or Log in
Log in via Facebook
The Permanent Representative of the Russian Federation to international organizations in Vienna Ulyanov called the refusal of AUKUS to provide data on the union abnormal
The United States agrees with Stoltenberg on the inadmissibility of Russia's influence in the issue of NATO expansion
In the USA, it was proposed to ban "Solntsepeki" and "Pinocchio"
Putin signed the law on the powers of Roscosmos in the field of infrastructure construction
Korean aircraft carrier "won back" funding
Конфликты: Йемен - "забытая" война
The National Interest (США): российский танк Т-80 — это не шутка
In the USA, they were surprised by the size of the Su-75
Russia will offer India the technology of the Octopus tank
Шойгу счел необходимым построить в России еще несколько крупных городов
The State Duma appreciated the idea of banning the sale of grenades after the shooting at the MFC in Moscow
British military demanded $1.1 million for stuttering after Estonian frosts
Sasapost (Египет): американцы создают самый мощный лазер в истории. Что это значит?
Tank killer: the work of the PTKM-1R anti-roof mine was shown on video
Корпорация "Иркут" до конца 2018 года поставит ВКС РФ более 30 истребителей Су-30СМ
other topics discussed
2006-2021 © ВПК.name. All rights reserved.
When reprinting, link to ВПК.name required.
User agreement.
№ 21-PP in the register of information distributors.
18+
Website hosting: TimeWeb.