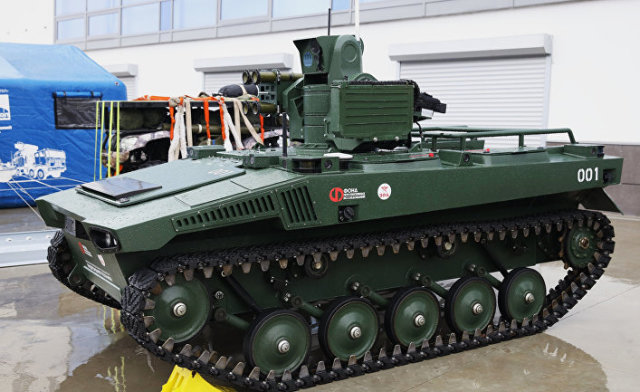 Forbes magazine writes about a new Russian robot. The device made an autonomous hundred-kilometer march. And "Marker" is also a platform on which technologies and systems are tested. Then the Russian military will install them on existing drones. The author admires the speed with which Russian developments are turning into real weapons.

The Russian combat robot is achieving new successes in autonomy and patrolling without human participation. He made a hundred-kilometer march and interacted with a swarm of drones. The new screenings, which were announced last week by the state news agency RIA Novosti, may seem to some to be insignificant achievements in competition with the West. But unlike the United States, Russia uses its robots in combat conditions, and this technique will find application in the troops sooner rather than later.

The ground-based robotic complex "Marker" is being created by the Advanced Research Foundation, which is the Russian equivalent of the Office of Advanced Research and Development of the US Department of Defense. It is equipped with a 7.62 mm machine gun and a pair of anti-tank missile systems. This robot is involved in several development projects.

"Marker is a technology demonstrator that allows you to evaluate the technologies and systems used, as well as experiment with various approaches to creating a functional unmanned ground vehicle," Samuel Bendett, an expert on Russian unmanned systems, who works as a consultant at the Center for Naval Analysis and the Center for a New American Security, told Forbes.

According to media reports, the tests were conducted in the Chelyabinsk region with the involvement of two wheeled and one tracked vehicle. The length of the longest route was 100 kilometers. It took the robot more than five hours to overcome this distance. He moved both on the road and over rough terrain. The operator only had to select the start and finish points, and the "Marker" found the route itself, creating a map in the process of movement with the help of cameras and other sensors. The car automatically bypassed obstacles and followed the fastest route.

This is part of the "Marker" autonomous movement plan, the implementation of which was launched in 2019. The ultimate goal is to make 200-kilometer marches. In some respects, this is a copy of the US Department of Defense's Advanced Research and Development Grand Challenge plan, in which autonomous cars competed in a 210-kilometer race according to similar rules.

The media reports also describe the tests of the "Marker" for the ability to independently patrol the area assigned to it.

During other tests, the "Marker" was combined with a group of drones. The video from 2019 shows how this robot works with a group of 15 drones, which are combined into three teams of five devices. This allowed them to conduct search and reconnaissance at a great distance, and thanks to this, the" Marker " was able to see inaccessible places, especially in urban areas. In addition, drones can transmit data to the robot about targets for destruction that it does not see on its own. This is similar to the EU project called "Out of line of sight", in which anti-tank missiles were demonstrated, directed to the target by small drones.

During the new show, the "Marker" itself performs the functions of a platform for launching drones. It is also possible that it is a connected repeater for drones. Why are there so many drones? The goal is not only to provide a large coverage over the territory, but also to use whole swarms of kamikaze drones and barrage strike ammunition, which Russia is beginning to supply to the troops.

"The Marker will one day be tested together with combat drones and barrage ammunition," Bendett says, noting that Russia has already conducted experiments on the joint use of other robotic vehicles with UAVs. This idea is attracting more and more interest.

Bendett notes that "Marker" is a modular system, and therefore different contractors will be able to offer new technologies that will only need to be connected and tested. This will allow you to quickly introduce new ideas and technologies into the testing process.

"The Russian Ministry of Defense is considering the development and implementation of autonomous and robotic systems in the troops. This is a methodical and orderly process, during which the main technological issues of integration will be solved, " says Bendett. "There is a unit consisting of 20 ground-based robotic complexes "Uran-9", so the Ministry of Defense has the opportunity to master this technique in combat, as well as in cooperation with other units."

The autonomy solutions that were developed for the Marker will be used in a number of robotic platforms, including the Uran-9, Sturm, and Soratnik, and possibly in the unmanned version of the T-14 Armata tank.

"The key difference between Russia and the United States is that although the United States has been developing combat ground robots for about 40 years, there have been constant objections to their adoption. In the Air Force, attack drones regularly perform combat missions, but ground robots like MAARS (Modular Advanced Armed Robotic System - "Modular Advanced Armed Robotic System") seem to be stuck at the development stage. (There are hints that the United States is using them secretly, but there is nothing official yet.) Russia also used Uran-9 combat robots in Syria. They have performed poorly, but the Russians have learned the necessary lessons, and now we can expect that the new system will go the same way.

"It is possible that ground-based robotic systems will be tested in Syria at some point," Bendett says. - The failures of the "Uran-9" in Syria in 2018 allowed the designers to learn important lessons that were certainly taken into account in the modifications of this system. Then such equipment will be tested in combat or in conditions close to combat."

Russian Defense Minister Sergei Shoigu recently boasted that the military has tested more than 320 types of weapons in Syria. Today, their autonomous ground robots may be in Chelyabinsk, but tomorrow they will be on the battlefield, and the next day their improved version will appear. It seems that Russia has literally made a bet on aggressive developments, intending to create a robotic Red Army.

The rights to this material belong to ИноСМИ
The material is placed by the copyright holder in the public domain
Original publication
InoSMI materials contain ratings exclusively from foreign media and do not reflect the editorial board's position ВПК.name
Страны
Россия
Сирия
США
Продукция
Армата
Уран-9
Компании
ФПИ
Персоны
Шойгу Сергей
Проекты
БПЛА
Евросоюз
Робот
РТК
Do you want to leave a comment? Register and/or Log in
Log in via Facebook
The Permanent Representative of the Russian Federation to international organizations in Vienna Ulyanov called the refusal of AUKUS to provide data on the union abnormal
The United States agrees with Stoltenberg on the inadmissibility of Russia's influence in the issue of NATO expansion
In the USA, they were surprised by the size of the Su-75
The National Interest (США): российский танк Т-80 — это не шутка
Korean aircraft carrier "won back" funding
Шойгу счел необходимым построить в России еще несколько крупных городов
The State Duma appreciated the idea of banning the sale of grenades after the shooting at the MFC in Moscow
British military demanded $1.1 million for stuttering after Estonian frosts
Sasapost (Египет): американцы создают самый мощный лазер в истории. Что это значит?
Tank killer: the work of the PTKM-1R anti-roof mine was shown on video
Корпорация "Иркут" до конца 2018 года поставит ВКС РФ более 30 истребителей Су-30СМ
Как России зарабатывать больше на продаже вооружений
Putin signed the law on the powers of Roscosmos in the field of infrastructure construction
In the USA, they called the advantages of the Russian "Sun"
Американский эксперт назвал пять мощнейших российских танков
other topics discussed
2006-2021 © ВПК.name. All rights reserved.
When reprinting, link to ВПК.name required.
User agreement.
№ 21-PP in the register of information distributors.
18+
Website hosting: TimeWeb.