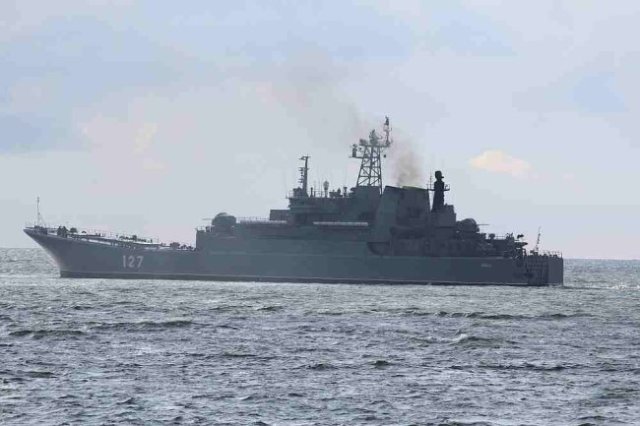 In the Military Harbor of Baltiysk, the marines of the Northern Fleet loaded military equipment onto landing ships for going to sea and landing at the Baltic Fleet training ground "Khmelevka".

As reported in the information support department of the press service of the Baltic Fleet, the training for the joint strategic exercise of the Armed Forces of the Russian Federation and the Republic of Belarus "West-2021"is being held in this way.

Loading of equipment took place on the large landing ships (BDK) of the Baltic Fleet "Korolev", "Kaliningrad", "Minsk", as well as the BDK of the Northern Fleet "Olenegorsky Miner".

These ships with marine units and equipment on board will make the transition by sea to the landing area. A detachment of Baltic Fleet warships consisting of corvettes, small missile ships and boats, small anti-submarine ships, as well as naval aviation of the fleet will cover them at the crossing.

Then the marines will take part in a special tactical lesson on landing a marine landing on an unequipped coast. The event involved more than two hundred personnel and more than 20 units of BTR-80 armored personnel carriers.

Other units of the Baltic Fleet also conducted trainings in the Kaliningrad Region in preparation for participation in the Zapad-2021 exercise. The gunners of the army corps destroyed the manpower and armored vehicles of the conditional enemy from the multiple launch rocket systems "Grad" and " Hurricane "in cooperation with the operators of the unmanned aerial vehicles" Orlan-10", who conducted reconnaissance and corrected the fire.

Tank units of a separate tank regiment of the army corps of the BF conducted live firing at the Pravdinsky training ground. More than 200 servicemen and more than 40 pieces of military equipment, including T-72B3 and T-72BM3 tanks, were involved in the live firing exercise. The personnel marched to the training ground, along the way practicing actions during a simulated enemy air raid and overcoming infected areas of the terrain.

The tankers fired at various distances at targets that imitated the manpower, equipment and aircraft of a conditional enemy. Such tactics as tank ambushes, maneuvers to the flank and rear of the enemy, raid actions, as well as the "Tank Carousel"tactics were practiced.

The rights to this material belong to Российская газета
The material is placed by the copyright holder in the public domain
Страны
Белоруссия
Россия
Продукция
БТР-80
Град РСЗО
Орлан-10
Т-72
Т-72Б
Компании
Минoбороны РФ
Проекты
БДК 775
БПЛА
БФ
СФ
Do you want to leave a comment? Register and/or Log in
Log in via Facebook
The Permanent Representative of the Russian Federation to international organizations in Vienna Ulyanov called the refusal of AUKUS to provide data on the union abnormal
The United States agrees with Stoltenberg on the inadmissibility of Russia's influence in the issue of NATO expansion
In the USA, they were surprised by the size of the Su-75
The National Interest (США): российский танк Т-80 — это не шутка
Korean aircraft carrier "won back" funding
Шойгу счел необходимым построить в России еще несколько крупных городов
The State Duma appreciated the idea of banning the sale of grenades after the shooting at the MFC in Moscow
British military demanded $1.1 million for stuttering after Estonian frosts
Sasapost (Египет): американцы создают самый мощный лазер в истории. Что это значит?
Tank killer: the work of the PTKM-1R anti-roof mine was shown on video
Корпорация "Иркут" до конца 2018 года поставит ВКС РФ более 30 истребителей Су-30СМ
Как России зарабатывать больше на продаже вооружений
Putin signed the law on the powers of Roscosmos in the field of infrastructure construction
In the USA, they called the advantages of the Russian "Sun"
Американский эксперт назвал пять мощнейших российских танков
other topics discussed
2006-2021 © ВПК.name. All rights reserved.
When reprinting, link to ВПК.name required.
User agreement.
№ 21-PP in the register of information distributors.
18+
Website hosting: TimeWeb.