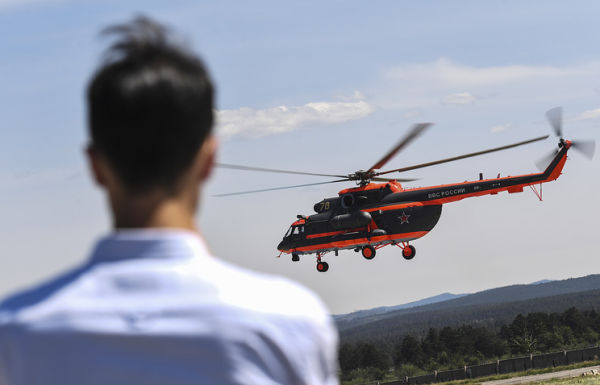 TSAMTO, September 3. The Ulan-Ude Aviation Plant (U-UAZ) of the Russian Helicopters holding and the Ministry of Emergency Situations signed an agreement for the supply of four Mi-8AMTSh-VA Arctic helicopters within the framework of the Eastern Economic Forum.

The document was signed by Alexey Kozlov, Managing Director of U-UAZ, and Viktor Yatsutsenko, Deputy head of the EMERCOM of Russia. In accordance with the terms of the agreement, a firm contract for the supply of four Mi-8AMTSh-VA in the interests of the department will be concluded in September 2021. Two helicopters will be delivered to the customer in 2022, and two more in 2023.

"Helicopters of this modification have been flying in the Arctic for several thousand hours and have proven themselves perfectly in the harsh northern conditions. The unique system of heating the transmission units allows the helicopter to quickly start the engines even in the most severe frost, which is extremely important for organizing emergency flights of rescuers, " said Alexey Kozlov, managing director of U-UAZ.

"This agreement is important for the development of the security system in the Arctic zone. Such helicopters are indispensable for extinguishing wildfires, can perform sanitary evacuation and delivery of rescuers to hard-to-reach areas. They are designed to work in conditions of northern latitudes, which are characterized by low temperatures and high wind load. The new helicopters will enter service with the newly created Arctic units of the Russian Emergencies Ministry to protect the population and territories of the Arctic region of the Russian Federation and ensure the safety of the Northern Sea Route," said Viktor Yatsutsenko, Deputy head of the Russian Emergencies Ministry.

The Mi-8AMTSh-VA helicopter was created specifically for operation in the northern regions, taking into account the increasing need to ensure state interests in the regions of the Arctic and the Far North. Among the main features of the design is the presence of a unique heating system for the oil system and transmission units, thanks to which at temperatures up to -60 degrees. C it is possible to quickly start the helicopter engines. The Mi-8AMTSh-VA is also equipped with improved fuselage thermal insulation, thermal insulation curtains, equipment for heating hot rations for the crew and transported personnel.

Flights over long distances between the points of basing are provided by installing external additional fuel tanks. When using them, the helicopter can fly for more than 7 hours at a range of up to 1400 km. The safety of the crew and passengers is increased by the use of special marine rescue suits.