Drones for extinguishing fires were shown at the Army-2021 forum 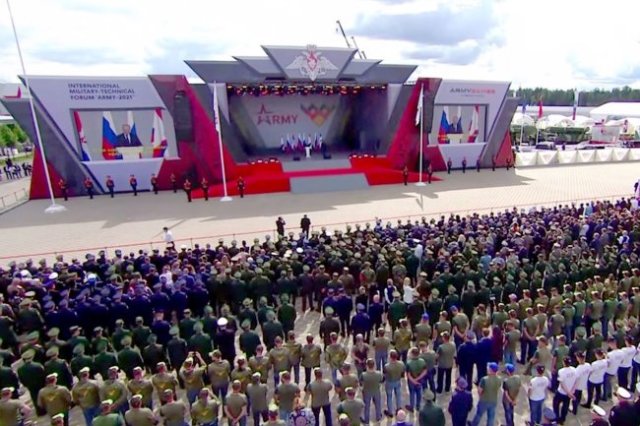 After the official opening, which took place on Monday, August 23, numerous negotiations between customers and manufacturers of military equipment, meetings with foreign delegations, various forums and round tables began in the Patriot Park. And, of course, the demonstration of new products continued. Not only combat shooting systems were presented, but also equipment for non-military purposes.

In particular, drones that can detect and extinguish forest fires at the earliest stage. This is already a well-known "Orion" and an unmanned helicopter BVS-VT450. They will be able to extinguish fires together and prevent their spread. This was told to Deputy Prime Minister of the Russian Federation Yuri Borisov by the general director of the Kronstadt enterprise, where unmanned aerial vehicles are developed and produced, Sergey Bogatikov.

According to him, now a whole line of helicopters is being created from 350 kg of take-off weight to 1.5 tons. Work is underway on the simultaneous use of helicopters and Orion UAVs from one point. The idea is that Orion performs reconnaissance of the area over large territories, identifies fire centers, and the helicopter performs an operation to extinguish local foci.

The new scheme of operation of drones will allow you to see the incipient fire, fix and localize it, preventing its spread.

For a long time, the two-link D-30 all-terrain vehicle could not break into the troops. And now it is one of the most popular cars, especially in the Arctic zone. All-terrain vehicles are used as transport vehicles and as a chassis for the Tor-M2DT and Pantsir-SA air defense systems. On the basis of two-link all-terrain vehicles, KA-250/30PM field kitchens began to be manufactured, specifically for the Arctic. They were demonstrated for the first time at the Army-2021 forum.

The crawler kitchen is equipped with modern ovens, in which, if necessary, you can warm up semi-finished products, bake pies or bread. There are also three large boilers that are used for simultaneous preparation of soups, porridges, other main dishes, as well as hot drinks. There is a convenient table for kneading dough, cutting ingredients for dishes, vegetables or fruits. All kitchen equipment is made of stainless steel. It is served by only four people who will feed 250 servicemen in the harsh field conditions of the northern latitudes. By the way, all-terrain kitchens can be used to feed not only the military, but also civilians working in remote northern areas.

In addition, during the Army 2020 forum, the first major contracts were signed today with the main customer - the Russian Defense Ministry. Earlier, the military reported that they intend to sign contracts for 500 billion rubles.

The rights to this material belong to Российская газета
The material is placed by the copyright holder in the public domain
Страны
Россия
Продукция
96К6 Панцирь-С1
Tор-М2
Орион БПЛА
Компании
Кронштадт
Минoбороны РФ
Персоны
Борисов Юрий
Проекты
Арктика
АРМИ-20XX
БПЛА
Тор ЗРК
Do you want to leave a comment? Register and/or Log in
Log in via Facebook
The Permanent Representative of the Russian Federation to international organizations in Vienna Ulyanov called the refusal of AUKUS to provide data on the union abnormal
The United States agrees with Stoltenberg on the inadmissibility of Russia's influence in the issue of NATO expansion
In the USA, they were surprised by the size of the Su-75
The National Interest (США): российский танк Т-80 — это не шутка
Korean aircraft carrier "won back" funding
Шойгу счел необходимым построить в России еще несколько крупных городов
The State Duma appreciated the idea of banning the sale of grenades after the shooting at the MFC in Moscow
British military demanded $1.1 million for stuttering after Estonian frosts
Sasapost (Египет): американцы создают самый мощный лазер в истории. Что это значит?
Tank killer: the work of the PTKM-1R anti-roof mine was shown on video
Корпорация "Иркут" до конца 2018 года поставит ВКС РФ более 30 истребителей Су-30СМ
Как России зарабатывать больше на продаже вооружений
Putin signed the law on the powers of Roscosmos in the field of infrastructure construction
In the USA, they called the advantages of the Russian "Sun"
Американский эксперт назвал пять мощнейших российских танков
other topics discussed
2006-2021 © ВПК.name. All rights reserved.
When reprinting, link to ВПК.name required.
User agreement.
№ 21-PP in the register of information distributors.
18+
Website hosting: TimeWeb.