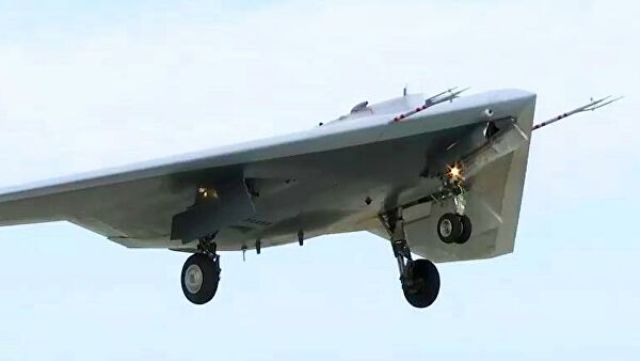 Moscow. August 22. INTERFAX - A long-term contract for serial deliveries of the heavy attack drone "Hunter" to the Russian army can be concluded in 2022, the head of the Ministry of Industry and Trade of the Russian Federation Denis Manturov said in an interview with Interfax.

"As for the S-70 "Hunter" - here we see the interest of the military department, we are preparing for the serial production of this drone, we are working on the issue of concluding a long-term contract next year, " Manturov said.

As Interfax reported, the Sukhoi company is working on the creation of Russia's first heavy attack drone of long flight duration - the S-70 "Hunter". On August 3, 2019, he took to the sky for the first time.

According to open data, its take-off weight is 20 tons, which makes it the heaviest of the currently developed drones. The dimensions of the Hunter (length-19 m, wingspan-14 m) are comparable to the parameters of the Su-57. Earlier, Russian President Vladimir Putin said that the combat load of the Hunter is 6 tons, the flight range is about 6 thousand km, and the altitude is 18 km.

Mass deliveries of the Hunter to the troops will begin from 2024, the first deputy chairman of the board of the Military-Industrial Complex of the Russian Federation Andrey Yelchaninov told Interfax in December 2020.

According to him, serial purchases of the Hunter will be included in the next state armament program for 2024-2033, which is already being developed by both the Ministry of Defense and the Board of the Military-Industrial Complex of the Russian Federation.

0
Inform
Do you want to leave a comment? Register and/or Log in
Log in via Facebook
The Permanent Representative of the Russian Federation to international organizations in Vienna Ulyanov called the refusal of AUKUS to provide data on the union abnormal
The United States agrees with Stoltenberg on the inadmissibility of Russia's influence in the issue of NATO expansion
In the USA, it was proposed to ban "Solntsepeki" and "Pinocchio"
Putin signed the law on the powers of Roscosmos in the field of infrastructure construction
Korean aircraft carrier "won back" funding
Конфликты: Йемен - "забытая" война
The National Interest (США): российский танк Т-80 — это не шутка
In the USA, they were surprised by the size of the Su-75
Russia will offer India the technology of the Octopus tank
Шойгу счел необходимым построить в России еще несколько крупных городов
The State Duma appreciated the idea of banning the sale of grenades after the shooting at the MFC in Moscow
British military demanded $1.1 million for stuttering after Estonian frosts
Sasapost (Египет): американцы создают самый мощный лазер в истории. Что это значит?
Tank killer: the work of the PTKM-1R anti-roof mine was shown on video
Корпорация "Иркут" до конца 2018 года поставит ВКС РФ более 30 истребителей Су-30СМ
other topics discussed
2006-2021 © ВПК.name. All rights reserved.
When reprinting, link to ВПК.name required.
User agreement.
№ 21-PP in the register of information distributors.
18+
Website hosting: TimeWeb.