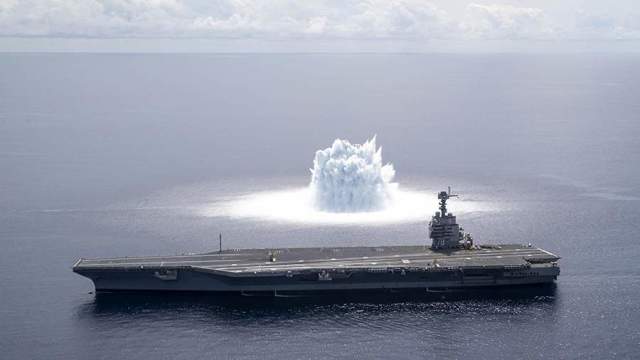 A former Chinese military instructor, Song Zhongping, expressed the opinion that a stress test for his own aircraft carrier by detonating explosives near him is an ostentatious action aimed at certain goals-China and Russia, the South China Morning Post reports.

On Thursday, August 12, off the coast of Florida, the US Navy made an "experimental explosion" next to its aircraft carrier USS Gerald R. Ford to test the ship's impact resistance in combat conditions. 10 tons of explosives were used, the resulting shock wave was similar to an earthquake of magnitude 3.9. The ship did not receive significant damage, the damage was lower than expected. Tests from this series were also carried out on June 18 and July 16, each time the aircraft carrier was getting closer to the explosion.

According to the expert, the footage of the detonation of explosives near the aircraft carrier should show China and Russia that the United States is not afraid of their anti-ship weapons.

"Another reason to announce the tests was to send a message to China and Russia: The US aircraft carriers are super — strong, and they don't care about conventional Chinese or Russian anti — ship weapons," Song Zhongping said.

In 2019, during the sea trials of the then-newest aircraft carrier USS Gerald R. Ford, the ship's steam turbines broke down and the ship had to interrupt the tests and return to the shipyard.