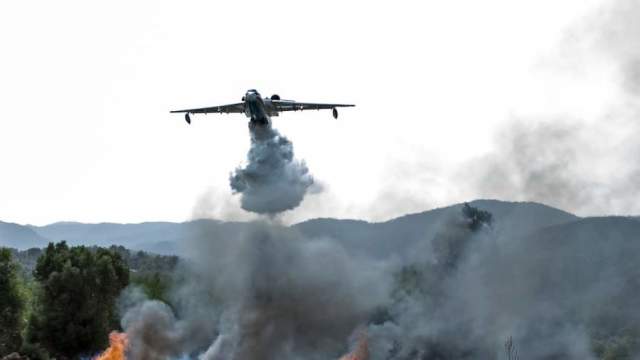 Planes from Russia and Ukraine are taking part in extinguishing forest fires in Turkey. This was announced by Turkish President Recep Tayyip Erdogan on July 30.

"The intelligence service and the police are working hard. The results will be announced. We extinguish fires with 4-5 planes, 45 helicopters. There are planes from Russia, Ukraine, and another one will be sent from Azerbaijan, " the president said.

The speech was broadcast on Twitter by the presidential press service.

Erdogan added that the situation with extinguishing fires is developing in a positive way, 57 fires have been brought under control in five provinces. The investigation of the causes of the fires continues.

According to the head of the Communications Department of the Turkish Presidential administration, Fahrettin Altun, about 4 thousand employees and hundreds of vehicles are fighting the fire "from the air and on the ground".

A day earlier, Erdogan announced the mobilization of all possible forces to contain and extinguish forest fires. The country's parliament assured that, despite the fact that the fires have spread over a large area of the south of the country, the situation remains under control and there is no danger for tourists.

On the same day, it was reported that as a result of forest fires in Turkey, more than 40 settlements were affected, the fire spread to Antalya, Adana, Mersin, Mugla, Osmaniye, Marmaris and Kayseri. Russians who are on vacation in Antalya were advised not to leave their hotels.

The fire affected the popular Turkish resorts of Bodrum and Marmaris, where several hotels were evacuated. Currently, the Consulate General of the Russian Federation in Turkey indicated that the danger for tourists vacationing in Antalya has passed, tourists are returning to their hotels, there are no injuries. Four deaths were reported.

The rights to this material belong to Известия.ru
The material is placed by the copyright holder in the public domain
Страны
Азербайджан
Россия
Турция
Украина
Продукция
Ан-32
Бе-200
Персоны
Эрдоган Реджеп
Comments [36]
№1