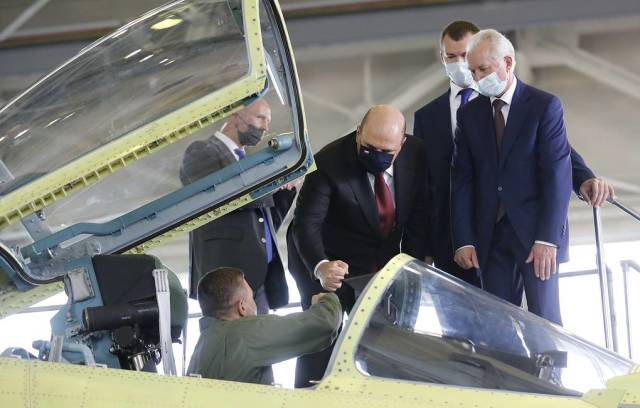 On July 28, Russian Prime Minister Mikhail Mishustin visited KnAAZ. Mishustin inspected the assembly shops for the production of these military aircraft, climbed into the fighter cabins, talked with test pilots. In the final assembly shop, the head of the government was waiting for interns-students of the Moscow Aviation Institute, whom Mishustin asked if they liked working at KnAAZ and introduced them to the acting governor of the Khabarovsk Territory Mikhail Degtyarev, telling about his first technical education. Degtyarev confirmed that his first specialization, which he received at the Samara University, is "engines of power plants". The Prime Minister also asked the students if they would like to come and continue working in the Far East, the guys confirmed this desire.

Komsomolsk-on-Amur Aviation Plant named after Yuri Alekseevich Gagarin is a branch of PJSC Sukhoi Company, part of the United Aircraft Corporation. It was founded in 1934, the first reconnaissance aircraft was released here in 1936. Since then, the company has produced more than 12 thousand military and civilian aircraft. The main direction of the company's work is the construction of fifth-generation Su-57 aircraft and multifunctional fighters of the 4++ Su-35S generation.

KnAAZ takes part in the creation of the Checkmate light tactical aircraft developed at the Sukhoi Design Bureau. In 2021, the plant assembled a full-size aircraft-a demonstrator of the technologies of this promising single-engine fighter. Work is underway to create the first sample for static tests.

Over the past five years, KnAAZ has carried out a large-scale program of modernization and technical re-equipment of production, including for the development of serial production of new types of aircraft. The introduction of modern technologies, the installation of new equipment provided a complete upgrade of the production base of a number of workshops. In particular, a new robotic electroplating workshop with special chambers for applying radio-absorbing coatings for the Su-57 program was put into operation. A number of other facilities are being reconstructed and built. New assembly lines of the Su-35S and Su-57 were put into operation on the basis of the in-line principle of production organization, which allows for high serial production.