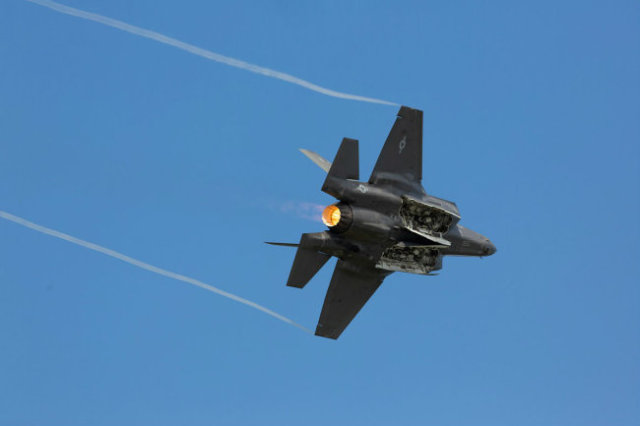 The incident occurred on July 13, but official information about it appeared recently on the website of the US Marine Corps. It is known that lightning struck the F-35B short takeoff and landing fighters during the flight. The pilots were not injured and managed to land safely at the Iwakuni Air Base in Japan. However, the planes were seriously damaged. Judging by the fact that the incident was assigned Class A, the repair will cost more than $ 2.5 million.

By the way, fighters of the traditional take-off version of the F-35A were previously prohibited from flying in a thunderstorm due to problems with the OBIGGS on-board inert gas generation system.

The vertical take-off version of the F-35B has a slightly different design of the OBIGGS system, which is placed around the lifting fan and historically makes it immune to lightning problems.

As The Drive portal noted, the grim irony is that a few days after the incident, a photo of a pair of F-35A Joint Strike Fighter Lightning II fighters protected by lightning rods, against which a real lightning strikes, was published on the official account of the Nellis Air Force Base on Twitter. In the tweet, the question sounds: "What do you think, which lightning strikes more strongly?", beating the name of the fighter (Lightning in English"lightning").

The rights to this material belong to Российская газета
The material is placed by the copyright holder in the public domain
Страны
Великобритания
США
Япония
Продукция
F-35
F-35A
F-35B
Do you want to leave a comment? Register and/or Log in
Log in via Facebook
The Permanent Representative of the Russian Federation to international organizations in Vienna Ulyanov called the refusal of AUKUS to provide data on the union abnormal
The United States agrees with Stoltenberg on the inadmissibility of Russia's influence in the issue of NATO expansion
In the USA, they were surprised by the size of the Su-75
The National Interest (США): российский танк Т-80 — это не шутка
Korean aircraft carrier "won back" funding
Шойгу счел необходимым построить в России еще несколько крупных городов
The State Duma appreciated the idea of banning the sale of grenades after the shooting at the MFC in Moscow
British military demanded $1.1 million for stuttering after Estonian frosts
Sasapost (Египет): американцы создают самый мощный лазер в истории. Что это значит?
Tank killer: the work of the PTKM-1R anti-roof mine was shown on video
Корпорация "Иркут" до конца 2018 года поставит ВКС РФ более 30 истребителей Су-30СМ
Как России зарабатывать больше на продаже вооружений
Putin signed the law on the powers of Roscosmos in the field of infrastructure construction
In the USA, they called the advantages of the Russian "Sun"
Американский эксперт назвал пять мощнейших российских танков
other topics discussed
2006-2021 © ВПК.name. All rights reserved.
When reprinting, link to ВПК.name required.
User agreement.
№ 21-PP in the register of information distributors.
18+
Website hosting: TimeWeb.