"Glory to Ukraine" was hidden under the armor of "Oplot" 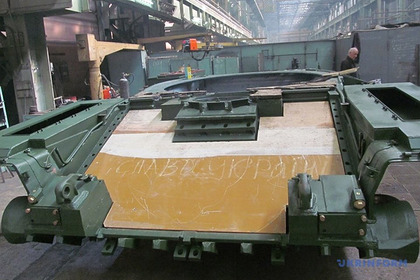 Workers of the Malyshev Kharkiv plant, which is part of Ukroboronprom, hid the inscription "Glory to Ukraine"under the frontal armor of the demonstration sample of the Oplot tank. The Telegram channel "Military Informant"drew attention to the pictures that appeared on the network .

The published photos show that the Ukrainian slogan is written in white letters by hand on the plate of the combat vehicle, on which the armor will be installed in the future. "Apparently, for good luck," the channel noted in the caption to the images.

As specified in the publication, the "Oplot" captured in the pictures is created specifically for demonstrating the machine to potential foreign customers. The work on its creation should be completed within three weeks.

In February, Defense Express reported that in 2021, the Malyshev Kharkiv Plant will produce only one sample of the Oplot tank. It was assumed that it should be ready for the parade on August 24, 2021, then they want to use the car at international exhibitions.

The publication noted that the cost of "Oplot" when using Western components exceeds $ 5 million, while the agreement included an amount of $ 3.5 million. Defense Express also drew attention to the fact that the actual production time of one tank is at least eight months — thus, since February, Ukrainian gunsmiths have not been able to make a full-fledged tank from scratch.