Despite all the efforts of the organizers to keep the intrigue before z zaplanirovanno on July 20, 2021 at the International aviation and space salon MAKS in Zhukovsky 2021 presentations of promising light single-engine fighter of the fifth generation, presumably, the program LTS ("Light tactical aircraft"), an unknown person 18 Jul leaking a brief video showing the appearance uncovered layout of the aircraft in the hangar presentation of the show.

Gluing video frames from the presentation hangar in Zhukovsky, demonstrating the appearance of a full-size layout (or the first prototype?) Russian promising light single-engine fighter of the fifth generation, developed by PJSC "Sukhoi Company "(as part of JSC "United Aircraft Corporation"), according to, presumably, the LTS program ("Light Tactical Aircraft"), 18.07.2021 (c) via Fighterman_FFRC @Fighterman_FFRC

The video confirms many features of the aircraft's appearance that were previously guessed in the sheathed layout, including the presence of a ventral air intake, similar to the photo of a fragment of an airplane model that was distributed by the RBC agency in December 2020, which was on the desktop of Deputy Prime Minister of the Russian Federation Yuri Borisov. The filmed uncovered model of the LTS aircraft with the painted tail number " 75 " demonstrates the presence of a single engine, a two-keel tail according to the V scheme, devoid of stabilizers, and the presence of internal compartments for outboard weapons.

The aircraft is being developed by PJSC "Sukhoi Company "(as part of JSC "United Aircraft Corporation").

Earlier, the State Corporation Rostec announced that the United Aircraft Corporation (UAC), which is part of it, will make a "presentation of a fundamentally new military aircraft" on July 20 on the first day International Aviation and Space Salon MAKS-2021 in Zhukovsky. A teaser was distributed with blurry images of the new aircraft under the "chess" mottos "The Chekmate" ("Checkmate") and "Turn the Chessboard"("Turning the chessboard"). In Zhukovsky, the presentation of the aircraft will take place in the hangar of PJSC Sukhoi Company under the code "LTS", decorated with these mottos and images of a chess knight.

Photos of a full-size presentation mock-up (or, after all, the first experimental sample, wrapped in a black tarpaulin, delivered to Zhukovsky on July 15?) they were widely distributed on the network. Now the appearance of the aircraft seems to be finally revealed before the presentation. 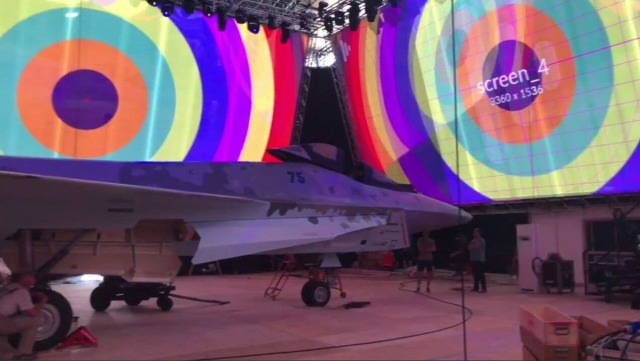 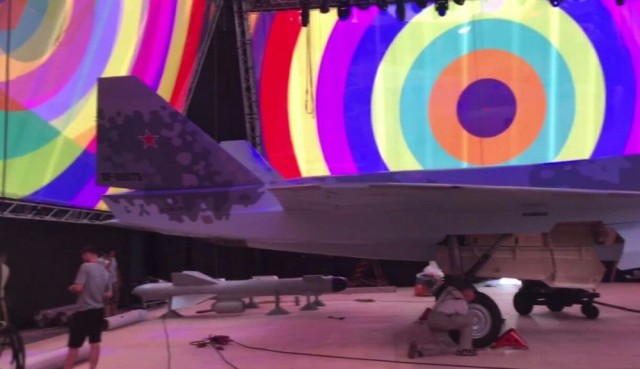 Video footage from the presentation hangar in Zhukovsky, showing the appearance of a full-size layout (or the first prototype?) a Russian promising light single-engine fighter of the fifth generation, developed by PJSC Sukhoi Company (as part of JSC United Aircraft Corporation), presumably under the LTS ("Light Tactical Aircraft") program. Multicolored circles on video screens in the hangar-calibration program for video images, 18.07.2021 (s) video from the Telegram channel "War History Weapons"

GC "Rostec" in response to the leak of the video distributed another " toad": 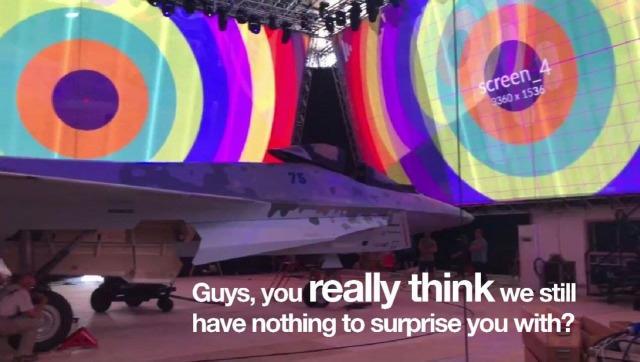