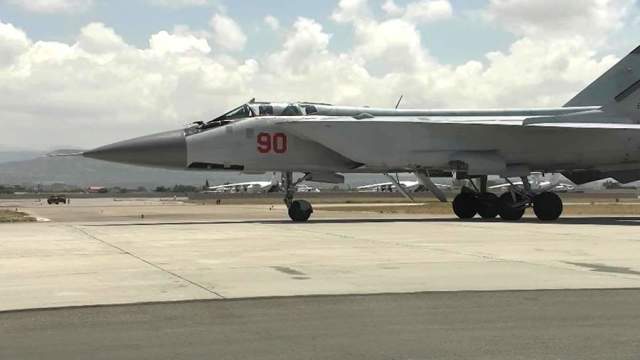 MiG-31K fighters capable of carrying hypersonic missiles and Tu-22M3 long-range bombers flew over the Mediterranean Sea as part of the exercises. This was announced on June 29 by the Ministry of Defense of the Russian Federation.


The ministry noted that the Navy and the Aerospace Forces of the Russian Federation continue exercises in the eastern part of the Mediterranean Sea.

"MiG-31K aircraft from the newest Kinzhal missile system and Tu-22M3 long-range bombers made training flights in the Mediterranean Sea," the report says.

As part of the exercises, tactical techniques for conducting reconnaissance of the surface and underwater situation were worked out. The maneuvering of the ships was carried out in cooperation with the Il-38 anti-submarine aircraft. Su-35 fighters and Su-34 fighter-bombers provided aviation cover for the actions of the fleet forces. In addition, the Ka-27 anti-submarine helicopter based on the Admiral Makarov frigate participated in the search operations.

Having successfully completed combat training tasks, all the aircraft safely returned to the Russian airbase "Khmeimim", the Defense Ministry stressed.

In addition, the fleet forces conducted training on repelling an air attack, issues of practical actions of calculations and air defense means to combat air targets were worked out. Special attention was paid to the fight against unmanned aerial vehicles.

Earlier, as part of the exercise, which started on June 25, a pair of MiG-31K aircraft with the ability to use the latest hypersonic missiles from the Kinzhal complex and an Il-38 anti-submarine aircraft were flown from Russian airfields to the Russian Khmeimim air base in Syria.

According to the plan of the exercise, five ships of the Russian Navy, including the missile cruiser "Moscow", the frigates "Admiral Essen" and "Admiral Makarov" and two submarines "Stary Oskol" and "Rostov-on-Don", together with anti-submarine aircraft Tu-142mk, Il-38, long-range bombers Tu-22m3 and MiG-31K aircraft, will perform combat training tasks to ensure the security of the Khmeimim air base and the naval logistics center Russia's "Tartus", the Ministry of Defense reported.

The rights to this material belong to Известия.ru
The material is placed by the copyright holder in the public domain
Страны
Россия
Сирия
Продукция
Ил-38
Ка-27
Кинжал ЗРК
МиГ-31
Су-34
Су-35
Ту-142
Ту-22М
Компании
Минoбороны РФ
Проекты
1135 Буревестник
1164 Атлант
636.3
БПЛА
Военные учения
ГЗЛА
Do you want to leave a comment? Register and/or Log in
Log in via Facebook
The Permanent Representative of the Russian Federation to international organizations in Vienna Ulyanov called the refusal of AUKUS to provide data on the union abnormal
The United States agrees with Stoltenberg on the inadmissibility of Russia's influence in the issue of NATO expansion
In the USA, they were surprised by the size of the Su-75
The National Interest (США): российский танк Т-80 — это не шутка
Korean aircraft carrier "won back" funding
Шойгу счел необходимым построить в России еще несколько крупных городов
The State Duma appreciated the idea of banning the sale of grenades after the shooting at the MFC in Moscow
British military demanded $1.1 million for stuttering after Estonian frosts
Sasapost (Египет): американцы создают самый мощный лазер в истории. Что это значит?
Tank killer: the work of the PTKM-1R anti-roof mine was shown on video
Корпорация "Иркут" до конца 2018 года поставит ВКС РФ более 30 истребителей Су-30СМ
Как России зарабатывать больше на продаже вооружений
Putin signed the law on the powers of Roscosmos in the field of infrastructure construction
In the USA, they called the advantages of the Russian "Sun"
Американский эксперт назвал пять мощнейших российских танков
other topics discussed
2006-2021 © ВПК.name. All rights reserved.
When reprinting, link to ВПК.name required.
User agreement.
№ 21-PP in the register of information distributors.
18+
Website hosting: TimeWeb.