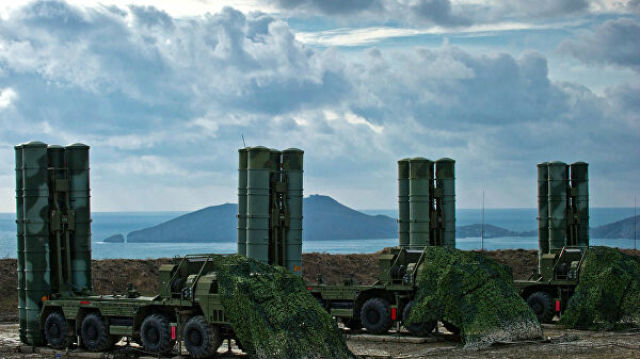 Moscow. June 29. INTERFAX - About 20 aircraft and helicopters, several divisions of the S-400 and Pantsir-S air defense systems conducted a training test in Crimea against the background of the Sea Breeze exercises launched on the eve of Ukraine, the United States and other NATO countries.

"In total, about 20 aircraft and helicopters were involved in the inspection, including Su-24MR reconnaissance aircraft, Su-27 and Su-30SM multi-purpose fighters, Su-24M front-line bombers and Mi-8 and Ka-27 helicopters, as well as divisions of the Triumph and Pantsir S-400 complexes from the Air Force and Air Defense Association of the Southern Military District, "the Russian Black Sea Fleet said on Tuesday.

According to the Russian military, the readiness of the air defense forces on duty was checked.

"During the inspection, the aircraft performed the task both at the maximum distance from the radar detection zones, and at ultra-low altitudes, using the terrain for covering, which significantly complicated the task for the air defense forces and means. Combat crews of the S-400 Triumph and Pantsir complexes made detection and electronic launches (without actual firing) at control targets, " the press service of the Black Sea Fleet said in a statement.

The Russian military in the Black Sea is monitoring the ships of NATO and other countries at the Sea Breeze exercise, the National Defense Control Center of the Russian Federation reported on June 28.

"The forces and means of the Black Sea Fleet carry out a set of measures to control the actions of the ships of the NATO Navy and other countries participating in the Sea Breeze - 2021 exercise, which started on June 28, 2021 in the northwestern part of the Black Sea, "the center said in a statement.

According to the US 6th Operational Fleet, during the exercises, combat operations at sea, on land and in the air, including amphibious landings, anti-submarine and anti-aircraft warfare, will be practiced.

On June 26, the American missile destroyer USS Ross entered the Black Sea. It can carry up to 56 Tomahawk cruise missiles with a range of 1.6 thousand km.

The British destroyer Defender and the Dutch frigate Evertsen have also been in the Black Sea since June 14.

The rights to this material belong to Интерфакс-АВН
The material is placed by the copyright holder in the public domain
Страны
Великобритания
Нидерланды
Россия
США
Украина
Продукция
96К6 Панцирь-С1
Arleigh Burke
BGM-109 Tomahawk
Ка-27
Ми-8
С-400 Триумф
Су-24
Су-24М
Су-27
Су-30
Компании
Минoбороны РФ
Проекты
NATO
Военные учения
ЧФ
Do you want to leave a comment? Register and/or Log in
Log in via Facebook
The Permanent Representative of the Russian Federation to international organizations in Vienna Ulyanov called the refusal of AUKUS to provide data on the union abnormal
The United States agrees with Stoltenberg on the inadmissibility of Russia's influence in the issue of NATO expansion
Putin signed the law on the powers of Roscosmos in the field of infrastructure construction
Korean aircraft carrier "won back" funding
Конфликты: Йемен - "забытая" война
The National Interest (США): российский танк Т-80 — это не шутка
In the USA, they were surprised by the size of the Su-75
Russia will offer India the technology of the Octopus tank
Шойгу счел необходимым построить в России еще несколько крупных городов
The State Duma appreciated the idea of banning the sale of grenades after the shooting at the MFC in Moscow
British military demanded $1.1 million for stuttering after Estonian frosts
Sasapost (Египет): американцы создают самый мощный лазер в истории. Что это значит?
Tank killer: the work of the PTKM-1R anti-roof mine was shown on video
Корпорация "Иркут" до конца 2018 года поставит ВКС РФ более 30 истребителей Су-30СМ
Как России зарабатывать больше на продаже вооружений
other topics discussed
2006-2021 © ВПК.name. All rights reserved.
When reprinting, link to ВПК.name required.
User agreement.
№ 21-PP in the register of information distributors.
18+
Website hosting: TimeWeb.