Feodosiya shipyard " Sea " will be transferred to USC

As reported by the newspaper "Kommersant" in the material Anastasia Vedeneeva and Alexander Dremlyugin "Rostec" will part with"Sea". The Crimean shipyard will be transferred to USC, and the United Shipbuilding Corporation (USC) will include another shipyard - the Feodosiya Sea, which now belongs to Rostec. The timing and mechanism of the transfer are still unknown. USC is going to keep the specialization of the " Sea " on high-speed vessels and intends to load the plant, including military orders. Analysts consider the transfer logical, given that under the conditions of sanctions, the Sea will not be able to develop independently. 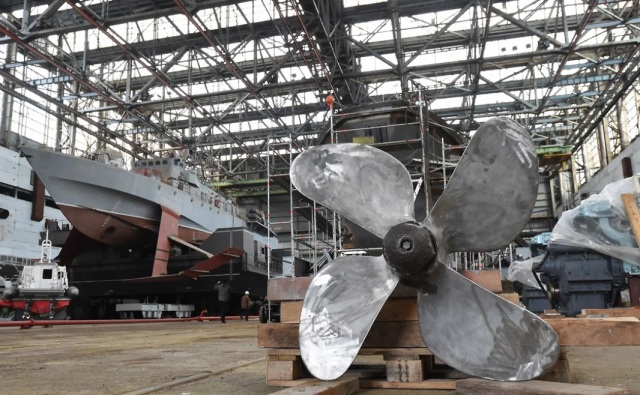 The Feodosia Shipbuilding Plant "Sea", which was transferred to the state corporation "Rostec" in 2018, will become part of the United Shipbuilding Corporation, industry sources told Kommersant. The Ministry of Industry and Trade confirmed that as part of the execution of the order of the President of the Russian Federation, the Ministry, together with Rostec and USC, is working on a mechanism for transferring the " Sea " to the corporation. The corresponding decision is due to "the need to implement a unified policy in the field of shipbuilding in the Azov-Black Sea region".

The plant was built in the late 1930s, and in Soviet times specialized in high-speed vessels made of aluminum alloys, hydrofoils and hovercrafts. The most famous military production is the world's largest amphibious assault ship "Zubr" (12322 ave.). The plant also built civilian vessels, including recreational "Comets". After the annexation of Crimea in 2014, the shipyard was nationalized by the authorities of the peninsula. Then in 2015 it was transferred to the ownership of the Russian Federation, and from the federal budget 1 billion rubles were contributed to the capital. Since 2016, the plant's capacities were transferred to the management of the Pella shipyard by Herbert Tsaturov, who used them to fulfill an order for small missile ships "Karakurt" (22800 ave.) for the Navy. According to open information, the three ships of this project laid down on the "Sea" were very late with the delivery date, which is now expected in 2022.

In 2018, Vladimir Putin signed a decree on the transfer of the shipyard to the state corporation Rostec, whose representatives then said that the plant was underutilized and required serious modernization. In 2020, the Accounting Chamber noted that due to sanctions, the construction of a boat to eliminate oil spills was not completed, because it was not possible to purchase engine parts. At the same time, the " Sea " declared its readiness to build high-speed pleasure ships "Comet" and fishing trawlers for Cuba, and also signed an agreement with the Black Sea Fishing Company for the construction of ten trawlers for fishing in the Azov-Black Sea basin.

Rostec told Kommersant that it is too early to talk about the mechanisms and timing of the transfer of the USC shipyard. In the state corporation, the decision is called "natural": it is a non-core asset for Rostec, while the Sea plant has unique competencies in the field of high-speed shipbuilding, which must be preserved and developed. The plant produces high-speed boats of the "Sargan" type, multifunctional diving vessels, bonopostanovschiki boats, as well as in cooperation with "Vimpel" - hydrofoils "Comet", concluded in "Rostec".

The USC reported that "they plan to load the plant with military orders that are suitable for this site - that is,we are talking about ships and vessels of the third and fourth rank" with a launching weight of 1-1.5 thousand tons. There are prospects for the development of composite shipbuilding, especially given the presence of such an interesting asset as the design and technology bureau "Sudokompozit" in the Feodosiya enterprises, the corporation concluded.

The head of Infoline-Analytics, Mikhail Burmistrov, notes that given the specifics of the company's production capacity, the high level of competition and the presence of sanctions, it is very difficult for the Sea to exist independently. For USC, this is an opportunity to form a full-fledged cluster in the Crimea, which can give synergy in the context of composite shipbuilding and military orders, the expert adds.

The rights to this material belong to bmpd.livejournal.com
The material is placed by the copyright holder in the public domain
Страны
Россия
Продукция
Зубр
Компании
Минпромторг РФ
ОСК
Пелла ОАО
Ростех
Персоны
Путин Владимир
Проекты
12322 Зубр
2020-й год
22800 МРК
Do you want to leave a comment? Register and/or Log in
Log in via Facebook
In the USA, it was proposed to ban "Solntsepeki" and "Pinocchio"
The Permanent Representative of the Russian Federation to international organizations in Vienna Ulyanov called the refusal of AUKUS to provide data on the union abnormal
The United States agrees with Stoltenberg on the inadmissibility of Russia's influence in the issue of NATO expansion
Putin signed the law on the powers of Roscosmos in the field of infrastructure construction
Korean aircraft carrier "won back" funding
Конфликты: Йемен - "забытая" война
The National Interest (США): российский танк Т-80 — это не шутка
In the USA, they were surprised by the size of the Su-75
Russia will offer India the technology of the Octopus tank
Шойгу счел необходимым построить в России еще несколько крупных городов
The State Duma appreciated the idea of banning the sale of grenades after the shooting at the MFC in Moscow
British military demanded $1.1 million for stuttering after Estonian frosts
Sasapost (Египет): американцы создают самый мощный лазер в истории. Что это значит?
Tank killer: the work of the PTKM-1R anti-roof mine was shown on video
Корпорация "Иркут" до конца 2018 года поставит ВКС РФ более 30 истребителей Су-30СМ
other topics discussed
2006-2021 © ВПК.name. All rights reserved.
When reprinting, link to ВПК.name required.
User agreement.
№ 21-PP in the register of information distributors.
18+
Website hosting: TimeWeb.