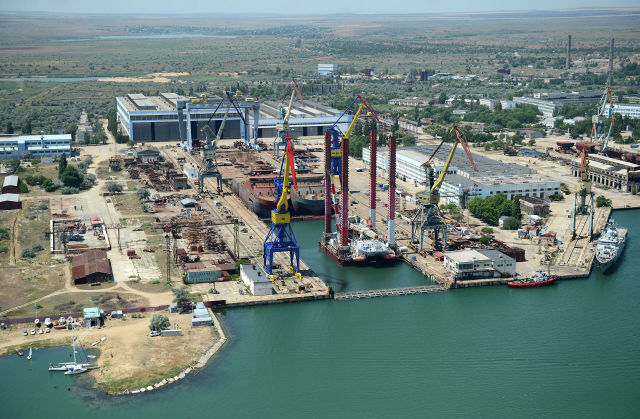 The source said that one of the vessels will be part of the Northern Fleet, the other - part of the Pacific Fleet.

MOSCOW, March 23. /TASS/. The newest cable vessels of the ocean class "Vyatka " and" Volga "of project 15310, which are being built at the "Gulf" plant in Kerch, will be handed over to the Russian Navy in 2023 and 2024. This was reported to TASS on Tuesday by a source in the military-industrial complex.

"According to the existing plans, it is planned to transfer the Vyatka and Volga to the Russian Navy in 2023 and 2024," he said.

Previously, it was planned to transfer the vessels in 2018 and 2019, then in 2020-2021. The delay in construction was presumably due to the need to replace imported equipment with domestic equipment.

According to the source, now the construction of ships is on schedule, there are no problems. "These are giant steamers," he said. The displacement of each of them is more than 10 thousand tons, the length is about 140 m. Both have the 5th ice class.

The source added that one of the vessels will be part of the Northern Fleet, the other - part of the Pacific Fleet.

The vessels were laid down in 2015 in Zelenodolsk, and since 2016 their construction has been continued by the Zaliv plant. According to unconfirmed official information, during this time, "Volga" received a new name - "Sviyaga". On August 18, 2020, the Vyatka was launched. It was to be followed by the Volga, after which the dry construction dock of the Bay will be used for the construction of two universal landing ships, officially laid down at the enterprise on July 20, 2020.

The rights to this material belong to ТАСС
The material is placed by the copyright holder in the public domain
Страны
Россия
Компании
Залив СЗ
Сухой ПАО
Проекты
2020-й год
22570 Свияга
СФ
Do you want to leave a comment? Register and/or Log in
Log in via Facebook
The Permanent Representative of the Russian Federation to international organizations in Vienna Ulyanov called the refusal of AUKUS to provide data on the union abnormal
The United States agrees with Stoltenberg on the inadmissibility of Russia's influence in the issue of NATO expansion
In the USA, they were surprised by the size of the Su-75
The National Interest (США): российский танк Т-80 — это не шутка
Korean aircraft carrier "won back" funding
Шойгу счел необходимым построить в России еще несколько крупных городов
The State Duma appreciated the idea of banning the sale of grenades after the shooting at the MFC in Moscow
British military demanded $1.1 million for stuttering after Estonian frosts
Sasapost (Египет): американцы создают самый мощный лазер в истории. Что это значит?
Tank killer: the work of the PTKM-1R anti-roof mine was shown on video
Корпорация "Иркут" до конца 2018 года поставит ВКС РФ более 30 истребителей Су-30СМ
Как России зарабатывать больше на продаже вооружений
Putin signed the law on the powers of Roscosmos in the field of infrastructure construction
In the USA, they called the advantages of the Russian "Sun"
Американский эксперт назвал пять мощнейших российских танков
other topics discussed
2006-2021 © ВПК.name. All rights reserved.
When reprinting, link to ВПК.name required.
User agreement.
№ 21-PP in the register of information distributors.
18+
Website hosting: TimeWeb.