The modernization of the remaining 30-40-year-old large anti-submarine ships of the project 1155 is designed to support the minimum necessary grouping of surface warships of the ocean zone-cruise missile carriers to the readiness of the project 22350M frigates and the Leader-class destroyers, the laying of the main hulls of which is expected in 2022-2024.

"Marshal Shaposhnikov" will be the first BOD converted into a frigate under the project 1155M with an extension of service life for another 15 years. The military department planned to receive it from the industry at the end of last year, but despite the completion of factory tests and successful firing at the end of the year, acceptance was postponed to a later date.

While the noted shortcomings are being eliminated, the future direction of the modernization program is being discussed.

Will the following buildings be modified according to the type of "Shaposhnikov" or will they be more thoroughly redesigned for an even more powerful arsenal of weapons of destruction?

Unfortunately, the backlog accumulated by domestic shipbuilders with the implementation of a number of long-term programs speaks in favor of the first option for reasons of "the road is a spoon for dinner". So far, the fleet has received only two frigates "Admiral Gorshkov" and "Admiral Kasatonov"from the surface ships of the new generation of the far sea zone. The next pair of ships of project 22350 is in a high degree of construction readiness, four more hulls are laid during 2019-2020, and contracts have been signed for two additional ones.

However, the frigates of the project 22350 are significantly smaller than the Soviet BOD in displacement (standard-4.5 thousand tons against 7) and, accordingly, have less autonomy. Larger frigates and destroyers have not yet come out of the design stage, and the two universal landing helicopter carriers of the project 23900, laid down last summer at the Zaliv shipyard (Kerch, Crimea), themselves need to be covered by missile ships of the above-mentioned classes.

Therefore, almost the only way to maintain the minimum necessary grouping of large surface missile – carrying ships of the Russian Navy is to repair and modernize the "battered" BOD. The latter are the real workhorses of our fleet, who have made hundreds of long-distance trips since 1980, when the lead "Udaloy" entered service. The collapse of the Soviet Union interrupted the construction of the series, the release was limited to 12 ships of the original appearance and one – improved ("Admiral Chabanenko" project 1155.1).

Time is taking its toll, by now four hulls have already been disposed of, and the Admiral Kharlamov, which was in reserve for a long time, was withdrawn from the fleet in December last year and is waiting for its turn to be cut up at the Nerpa SRZ. The Northern and Pacific Fleets each have three active BOD units.

The return of the Shaposhnikov to service will undoubtedly strengthen our forces in the Far East, but they will be reduced with the commissioning of the Admiral Vinogradov. In parallel with it, work will be carried out on the Admiral Levchenko in the North. Thus, the list of active BOD will be reduced to four: "Vice-Admiral Kulakov", "Admiral Tributs", "Severomorsk" and "Admiral Panteleev". Apparently, they, too, will be converted into frigates. Moreover, from the height of today's situation, it is clear that the entire program will go beyond the deadlines announced by the Ministry of Defense of the Russian Federation in 2015 for several years: it is impossible to complete it before 2022.

The need to quickly modernize and at the same time give the customer a ship of the required class determined the nature of the changes made to the original project.

Five years ago, "Shaposhnikov" was put on modernization in JSC "Ship Repair Center Dalzavod" (Vladivostok). Among the proposals at first was a deep modernization with a complete replacement of the old set of weapons consisting of the A-192 "Armat" gun, Kalibr missiles and an air defense system based on the S-400 and Redut. However, in the end, the updated "Shaposhnikov" turned out to be more modest. It was equipped with two vertical launchers 3C-14 of the Kalibr complex (accommodates 16 missiles of the 3M14 dimension), a pair of triple launchers 3C24 of the Uranus complex and a new firing control system. Among the new equipment, we note the hardware and software system of information support for operation, the information support system for the fight for survivability; the electronic warfare complexes TK-25–2 and communications R-779–28, the radio monitoring station "Sirius".

One AK-100 artillery mount was removed, the second gave way to a new A-190-01 of the same caliber – 100 mm. The fire control function is assigned to the MR-123–02/3 Bagheera system. Replacing the nose tower with a lighter one gives a decent gain in weight, more than 20 tons. New technologies in the field of artillery increase the accuracy of fire and reduce the consumption of shells to hit a single target. Due to the reduction of barrel artillery and ammunition, a significant weight reduction was obtained – about 50-60 tons - which made it possible to increase the share of missile systems in the total mass of the ship's armament. 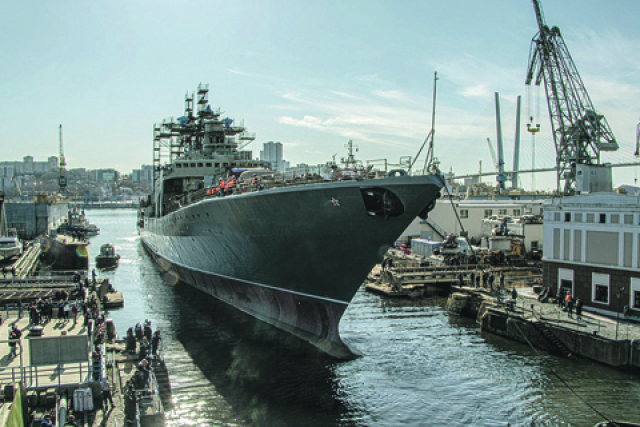 The frigate "Marshal Shaposhnikov" in dry dock on the eve of the first tests. Photo from the site www.mil.ru

The place of the second AK-100 turret was taken by a pair of VPU 3S14 (eight cells each) of the Kalibr-NK complex, which uses three main types of missiles: anti–ship 3M54, surface-to-surface 3M14, and anti-submarine 91R. And thanks to the implemented principle of universality, supersonic anti-ship missiles "Onyx" and hypersonic "Zircon"can be placed instead of them. However, since the latter have a large diameter, the total number of ammunition units is reduced.

If we take anti-aircraft weapons out of the brackets, it turns out that instead of one type of missile weapon – the outdated anti – submarine complex "Rastrub" - "Shaposhnikov" now has several types of modern cruise missiles for destroying ground, surface and underwater targets. This circumstance allowed the military department to change the classification of the ship. In the releases of the Ministry of Defense of the Russian Federation, "Marshal Shaposhnikov" passes not as a BOD, but as a "modernized frigate".

If earlier the BOD of project 1155, due to the lack of anti-ship weapons on them, was supposed to be used in conjunction with the destroyers of project 956 (which practically did not survive in our fleet), now the "modernized frigate" can act as a "single raider", having a choice of three types of RCC. "Uranus" is better suited for destroying boats and corvettes at close range, 3M54-increased, and "Onyx" and "Zircon" - more effective in attacking heavy, well-protected targets, including cruisers and aircraft carriers. Instead of part of the anti-ship missiles, the ship can take shock, for example, type 3M14, which were used to destroy the objects of the banned in Russia "Islamic State" in Syria (in total, up to 100 launches were carried out).

To carry out work on the placement of new weapons, it was necessary to remove 20% of the ship's settings from aluminum alloys, update them or make them anew.

From the old weapons, the platform and hangar for two Ka-27 helicopters, RBU-6000 rocket launchers, 533-mm torpedo tubes, 30-mm anti-aircraft submachine guns and the Kinzhal air defense system have been preserved, and the latter is equipped with improved missiles (possibly unified with the Tor) with an increase in the firing range from 6 to 10 km in height and from 12 to 18 km in range. The gas turbine units also remained in place: the afterburner DT59 and the marching DO63-proven by time and miles traveled as very reliable.

As the main means of target detection, the 5P-30N2 "Fregat-N2" radar and the MGK-355 "Polinom" GAK are used (only some of its elements have been replaced, which has increased the target detection range and other characteristics). The antenna of the latter is located under water in the bow fairing with dimensions of 30x5 m. The large mass (72 t) and the dimensions of the GAK worsen the seaworthiness of the ship: in motion, its bow is filled. This is not a mistake of the designers of the Northern Design Bureau, but a compromise that had to be made for the sake of placing sensor equipment with very high characteristics, many data on which are still not available in open sources. Only the maximum detection range in active mode is known: a submarine 40-50 km, torpedoes and anchor mines-up to 5 km. For the sake of increasing seaworthiness and improving the conditions of habitability, the improved project 1155.1 "Polinom" was replaced with the GAK "Zvezda-2" and a rocking calmer with non-retractable rudders was introduced. During the modernization of Shaposhnikov, such radical changes were not made. Thanks to this, a well-armed frigate turned out-at a cost significantly less than the cost of building a completely new ship of this class and displacement.

Last summer, the Shaposhnikov completed three trips to the Sea of Japan for factory sea trials. Together with the delivery team, the crew checked the operation of the power plant, steering device, auxiliary mechanisms, communication, detection and navigation equipment. Then the ship went into dry dock to paint the underwater part of the hull, and finally check it and the bottom-outboard fittings.

Closer to the middle of December, the ship "acquired a complete look" and went to the waters of the Sea of Japan for the second stage of the ZHI. According to the press service of the Dalzavod, for testing weapons, practicing throw tests from missile systems "in order to check the strength of the reinforcement of launchers and ensure the safety of storing weapons on board."

Several messages on the topic "The final part of the factory sea trials" appeared on the website of the Ministry of Defense of the Russian Federation. At this stage, the crew was tasked with testing new weapons samples together with industry representatives. In the Gulf of Peter the Great, the frigate fired at air and sea targets. The targets were fired from the A-190 universal naval artillery system and the AK-630 30-mm six-barrel automatic artillery systems. The torpedoes were dropped and the Uranus missile was launched.

The last message with the mention of "Marshal Shaposhnikov" on the news feed of the website of the Ministry of Defense of the Russian Federation is dated December 24. It spoke about the execution of the shooting, but did not give information about the results of the previously announced verification of "electronic jamming equipment", as well as "comprehensive testing of all means of communication". Perhaps they still have to pass with positive ratings.

One way or another, the repair of the Marshal Shaposhnikov is coming to an end, and it will soon return to the active fleet forces. In short, the Project 1155 ship modernization program is beginning to bear fruit. This is a good option for the practical implementation of the "new ship – in the old hull" approach, when for a relatively small price the fleet receives a significantly updated combat unit, comparable in strength and autonomy of fire to a new-built frigate. Now the main thing is not to overload this program with excessive requirements, but to finish it early. So that the 30-40-year-old ships of the Soviet era still serve the country, giving it the opportunity to design and build new ones-the next generation. Thus, to ensure the actual presence of the fleet forces not in repairs, on drawings and construction sites, but on the ocean expanses-where they most contribute to the promotion of our national interests. 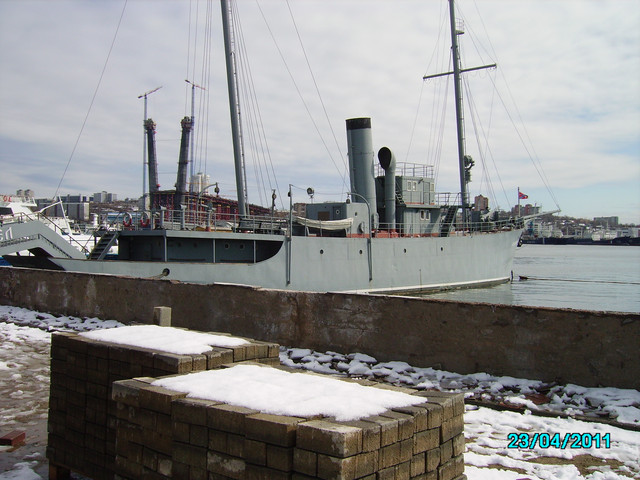 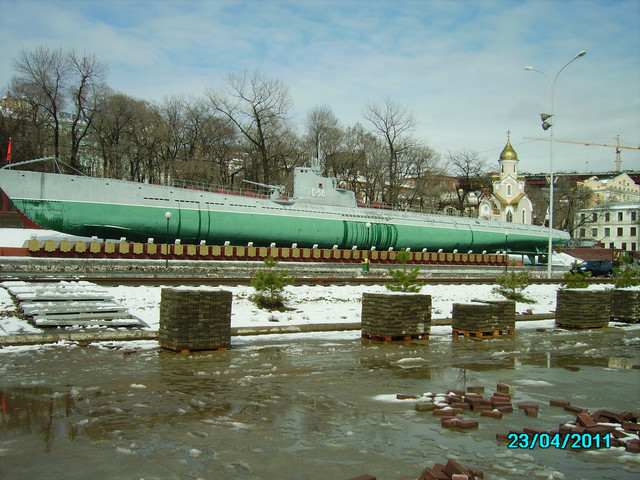