Closed skies: an innovative air combat system is being created in Russia 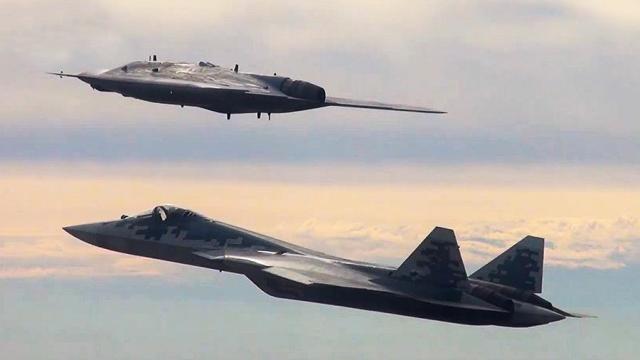 Russia is radically changing the rules of air warfare. For strategic bombers, advanced fighters and drones, the latest hypersonic weapons are already being developed. And drones and planes are taught to fly and perform combat missions together. Anton Lavrov, a columnist for Izvestia, has been looking into how the new products will change the nature of military operations and how this will affect the confrontation with the enemy.

Russia is radically changing the rules of air warfare. For strategic bombers, advanced fighters and drones, the latest hypersonic weapons are already being developed. And drones and planes are taught to fly and perform combat missions together. Anton Lavrov, a columnist for Izvestia, has been looking into how the new products will change the nature of military operations and how this will affect the confrontation with the enemy.

Heavy unmanned aerial vehicles (UAVs) S-70 "Hunter" will be able to use the entire modern range of aviation weapons, as well as promising long-range and hypersonic missiles, sources in the defense industry and the military department told Izvestia. Work on testing the weapon is already underway.

As previously reported by Izvestia, the issue of combining Su-57 and Hunter fighters in air regiments is now being considered. The military does not hide the goals of their interaction. It is stated that the use of an unmanned partner will expand the radar field of the Su-57. S-70 will also be able to give target designation to a manned vehicle.

It is obvious why a large "Hunter", rather than a more compact UAV, was chosen for the role of the aircraft's partner. Only a low-visibility jet drone with a fighter engine installed on it will be able to operate in the same formation with a fifth-generation combat vehicle, without shackling or unmasking it.

It has already been announced that the Hunter will receive new high-precision bombs weighing 50-100 kg, created specifically for UAVs. But it will not be limited to them. The internal compartments of the drone are unified in size with the Su-57, which gives it the ability to use much more serious ammunition. It is quite possible that the device will be equipped with hypersonic guided missiles, which are being created as part of the Gremlin development work. There are no fundamental obstacles to the use of the S-70 modern long-range air-to-air missiles.

- A pair of Su-57s and a drone with such weapons will be able to successfully perform strike tasks that previously required entire squadrons, - said military expert Vladislav Shurygin. — It will no longer be necessary to break through the enemy's ground air defense lines and the curtain of his fighters. On any stationary target, you can deliver an irresistible blow with several hypersonic missiles from a distance of 1-1. 5 thousand km.

The question may arise, why, with such a powerful and multifunctional UAV, do you even need a person in the cockpit of a neighboring plane? After all, the whole world is already thinking about the concept of the next, sixth generation of fighters. According to the popular view, they will either be completely unmanned or optionally controlled. Computer programs are already beating real pilots in simulated air battles on simulators.

But so far, the fifth generation is only beginning to enter mass service both here and abroad. The next, sixth, is still decades away. And it is already clear that the state of artificial intelligence technologies does not allow and in the foreseeable future will not allow replacing a person in the most important things — making decisions, setting tasks and responding to unexpected changes in the situation.

The Russian bid for the near future is to turn the drone not into an autonomous robot, but into a combination of a bloodhound and a loyal squire. It should help the pilot to find targets, warn of potential threats and become a carrier of additional ammunition.

But even at this level, the interaction of manned and unmanned vehicles will not be easy to ensure. The pilot of a single-seat Su-57 can not be distracted by direct control of the drone. Therefore, it is necessary to teach the UAV to independently maintain the formation even during maneuvers, to automatically respond to threats, to choose the optimal direction of attack that a person will indicate.

Do not expect this to happen in the coming years. The VKS has received only the first of the 76 Su-57s ordered so far. "The Hunter" also exists in a single copy that does not fully correspond to its final appearance. It is possible that the Defense Ministry will finally form an updated view of their interaction next year. It is already known that it is planned to increase purchases of such equipment in the updated state armament program for 2024-2033.

From official statements, it is obvious that the leadership of the Armed Forces is betting on long-range high-precision ammunition for aviation. And it is not limited to operational and tactical aviation with even new hypersonic missiles with a range of 1-2 thousand km.

"Just 10 years ago, the situation for the Russian Aerospace Forces was completely different and such a range looked fantastic even for strategic aviation," military historian Dmitry Boltenkov told Izvestia. -The familiar Su-25 attack aircraft, Su-24M bombers and MiG-29 and Su-27 fighters were extremely limited in the choice of guided weapons. And the few remaining samples in good condition had a range of tens of kilometers at best. Long-range aviation (YES) had almost no non-nuclear cruise missiles.

During the operation in Syria, there was rapid progress in the number of precision weapons used (WTO). Strategic bombers used more X-101 and X-555 cruise missiles there than were used in all exercises and tests. Experience has shown that even in such a conflict, a massive and numerous WTO is necessary, and a modern war without it is completely unthinkable, the expert concluded.

In recent years, it has become known about the development of several families of new missiles for long-range aviation, both traditional and hypersonic. It is expected that their range, even in a non-nuclear version, can reach 4-5 thousand km.

Such weapons will radically increase the capabilities of strategic bombers and turn them into an even more powerful tool for force projection. In the range of YES, even when departing from bases in Russia, the territory of almost the entire planet will be in reach. At the same time, its number and capabilities are planned to increase due to the modernization of existing aircraft, the resumption of production of the Tu-160 and the start of production of a promising long-range aviation complex.

The rights to this material belong to Известия.ru
The material is placed by the copyright holder in the public domain
Страны
Россия
Сирия
Продукция
МиГ-29
ПАК ФА
Су-24
Су-24М
Су-25
Су-27
Ту-160
Х-101
Х-555
Проекты
AI
БПЛА
Военные учения
ГЗЛА
ИТ
ПАК ДА
Робот
Ядерный щит
Do you want to leave a comment? Register and/or Log in
Log in via Facebook
The Permanent Representative of the Russian Federation to international organizations in Vienna Ulyanov called the refusal of AUKUS to provide data on the union abnormal
In the USA, it was proposed to ban "Solntsepeki" and "Pinocchio"
The United States agrees with Stoltenberg on the inadmissibility of Russia's influence in the issue of NATO expansion
Putin signed the law on the powers of Roscosmos in the field of infrastructure construction
Korean aircraft carrier "won back" funding
Конфликты: Йемен - "забытая" война
The National Interest (США): российский танк Т-80 — это не шутка
In the USA, they were surprised by the size of the Su-75
Russia will offer India the technology of the Octopus tank
Шойгу счел необходимым построить в России еще несколько крупных городов
The State Duma appreciated the idea of banning the sale of grenades after the shooting at the MFC in Moscow
British military demanded $1.1 million for stuttering after Estonian frosts
Sasapost (Египет): американцы создают самый мощный лазер в истории. Что это значит?
Tank killer: the work of the PTKM-1R anti-roof mine was shown on video
Корпорация "Иркут" до конца 2018 года поставит ВКС РФ более 30 истребителей Су-30СМ
other topics discussed
2006-2021 © ВПК.name. All rights reserved.
When reprinting, link to ВПК.name required.
User agreement.
№ 21-PP in the register of information distributors.
18+
Website hosting: TimeWeb.