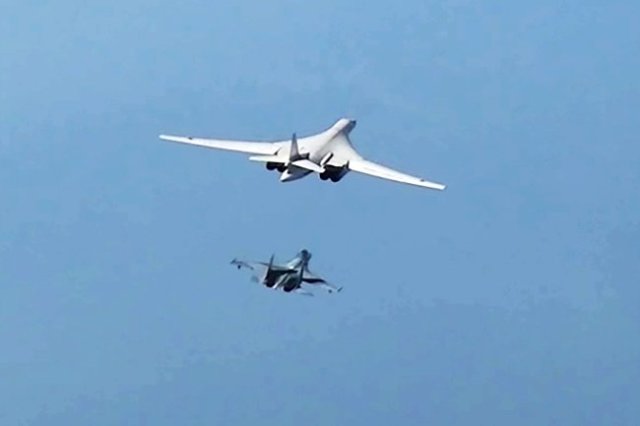 Two Russian Tu-160 strategic missile carriers carried out a planned raid over the neutral waters of the Arctic Ocean, the Barents Sea and the White Sea. The Russian Defense Ministry later posted video footage of the flight on its social media accounts.

As reported to the correspondent of "RG" in the military department, long-range aircraft were on the route for more than 14 hours. During this time, the crews also worked out refueling in the air in the conditions of the polar night. At the signal, the aircraft tanker Il-78 pilots had at about 600 kilometers per hour to bring their cars to the aircraft-refueling tankers, to make the docking cone is a 20-metre fuel hose with a receiver of the missile to keep the "bunch" until fuel flowed into the tanks of the Tu-160.

Such maneuvering for long-range aviation pilots, even in the light of day, is akin to aerobatics. And here-solid darkness and the constant danger that the fuel hose will break, and a jet of kerosene under high pressure will drench the cabin of the missile carrier. Or even worse: the cone of the hose will break the skin of the Tu-160 and, quite likely, cause an instant fire in the air. Fortunately, nothing of the sort happened. Refueling crews worked normally, although, of course, not without hassle.

The Russian Defense Ministry stressed that all flights of the Russian Aerospace Forces are carried out in strict accordance with international rules for the use of airspace. The Tu-160s followed the route without crossing the routes used by civilian airliners. I must say that the crews of long-range aviation of the Russian Federation regularly fly over the neutral waters of the Arctic, the North Atlantic, the Black and Caspian Seas, and the Pacific Ocean.

During the air patrol, they are often accompanied by our fighters. Such a precaution is useful, because at certain stages of the flight, foreign combat aircraft try to approach the Russian missile carriers. However, it usually does not come to serious incidents.

The Tu-160 supersonic strategic missile carrier is capable of carrying 12 cruise missiles placed inside the fuselage. Now the aircraft factory in Kazan is preparing for mass production of the upgraded Tu-160M and working on a promising long-range aviation complex PAK DA. It is known from open sources that it will receive modern computing and onboard systems, a new platform-free inertial navigation, an improved electronic warfare system, as well as advanced weapons control.