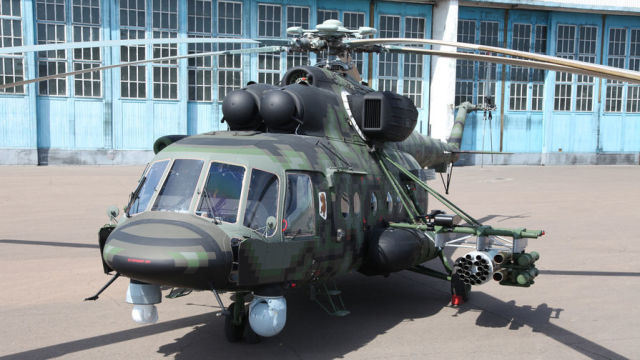 The Russian military has experienced a "flying BMD" with precision missiles

The" flying " combat vehicle of the landing force - the latest mi-8AMTSH-VN "Sapsan" helicopter-fired anti-tank guided missiles "Ataka-VM". As told in the Russian military-industrial complex, the crew of a prototype helicopter successfully attacked targets that mimic the armored vehicles of a potential enemy.

As told in the Russian military-industrial complex, the crew of the prototype Mi-8AMTSH-VN attacked targets that mimic the armored vehicles of a potential enemy.

In addition to attacks by ATGM, the helicopter attacked heavy ground vehicles with unguided rockets, and also fired at conditional enemy objects from cannons in suspended containers.

"Thanks to the improved guided weapons and increased survivability, the new helicopter has become a truly multifunctional machine for performing shock, assault and amphibious transport tasks. In fact, it has confirmed its characteristics as a flying amphibious combat vehicle," the military stressed.

The mi-8ATMSH-VN, produced at the Ulan-Ude aviation plant (U-UAZ), was presented to the General public at the international aviation and space salon MAKS in 2017.

The vehicle is designed to perform a wide range of tasks: from transport and amphibious functions to fire support for special forces, according to the Airwar portal. In June 2019, at the Army-2019 forum, the Ministry of defense of the Russian Federation and the Russian Helicopters holding company agreed to supply the first ten Mi-8AMTSH-VN.

"We need a kind of flying tank. This is more effective than supporting fighters from IFVs or tanks - you can see the situation better from the air»,

- so justified the need to create a "peregrine Falcon" Colonel and Deputy Chairman of the Union of paratroopers of Russia Valery Yuryev.

A deep modernization of the helicopter was carried out taking into account the experience of its combat use in Syria during the counter-terrorist operation of the Russian Armed forces. Specialists have improved the combat effectiveness of the Mi-8ATMSH-VN, optimally combining the principle of "glass cabin", reliable analog equipment and digital autopilot.

In addition, the Russian designers of the defense industry have improved the survivability and thrust-weight ratio of the machine - most of the body is protected by lightweight Kevlar plates, and also expanded the possibilities of its use in high mountains and hot climates.

The Sapsan is equipped with the President-S defense system, which automatically detects the launch of a missile directed towards the helicopter, interferes with the guidance head and throws out false thermal targets.

"Air BMD" is equipped with a universal gun container with a double-barreled 23-mm rapid-fire gun GSH-23, unguided missiles B-8V20A for the destruction of equipment and manpower, high-explosive fragmentation bombs ofab-250 and a complex of guided missile weapons with a survey and sighting system.

The vehicle is also equipped with three 12.7 mm Korda machine guns (two heading and one for landing support) and one 7.62 mm KVP machine gun in the tail section.

Sapsan is equipped with VK-2500-03 turboshaft engines developed and manufactured by UEC-Klimov JSC (part of the United engine Corporation - UEC - rostec state Corporation) with an upgraded transmission and improved altitude and climate characteristics and a new carrier system. In emergency (short-term) mode, the VK-2500-03 can develop power up to 2800 horsepower.

It is planned that the Mi-8AMTSH-VN will be able to throw 37 paratroopers into the combat area or evacuate 12 wounded on stretchers. Some sources provide information that the mi-8AMTSH-VN helicopter is an improved version of the Mi-8/17 helicopter, created taking into account the Syrian experience.

In fact, as the experts of the Newspaper told earlier.Ru", the new helicopter is an upgrade of the AMTS version of the U-UAZ development and its main difference is in the complex of guided weapons.

A number of sources also indicated that the vehicle will be equipped with a "product 305" or a promising guided missile "Hermes-A" with a firing range of up to 20-25 km. This is twice as much as any other helicopter anti-tank guided missiles currently available on the equipment of the army aviation of the Russian aerospace forces. It is also planned to equip the upgraded Ka-52M and Mi-28NM with such weapons.