The extraordinary fate of the K-19 submarine 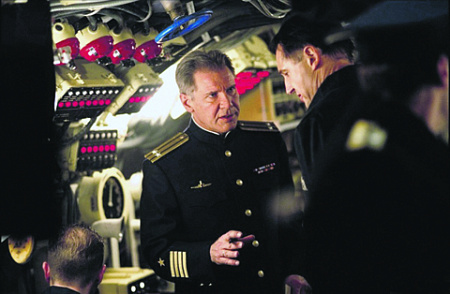 The first Russian nuclear-powered ship-a carrier of ballistic missiles with nuclear warheads-entered service on November 12, 1960, when the state Commission signed the acceptance certificate on the completion of the K-19 tests. the Lead ship of project 658 did not receive its own name. And due to severe accidents in July 1961 and February 1972, accompanied by the release of radiation and the death of crew members (9 and 30 people, respectively), it remained in the memory of the people under the nickname "Hiroshima".

Despite all the twists and turns, the submarine remained in the active forces of the fleet for 30 years, and then was listed in reserve for another 13 years, until it was disposed of at the Nerpa ship repair plant in 2003. During this time, 42 crew members were killed for various reasons.

The fate of the K-19 is extraordinary and rarely leaves anyone indifferent. It was addressed by writers and cinematographers, primarily through the prism of analyzing the actions of officers and sailors in an extreme situation, when the strengths and weaknesses of a person are most clearly manifested. Today, in the days of the 60th anniversary of Russian strategic missile submarines, it seems logical to consider the role and place of the K-19 in the history of the naval nuclear deterrent force (msnf).

This submarine was not the first with a nuclear reactor on Board – this was The K-3 "Leninsky Komsomol", adopted by the fleet a couple of years earlier, in 1958. At first, the first-born of the domestic nuclear submarine shipbuilding wanted to arm one t-15 super torpedo 24 m long and weighing about 40 tons, but eventually settled on 20 serial standard caliber 533 mm.

The K-19 carried a much more powerful weapon: three vertical shafts were added to the torpedoes (which turned from the main weapon into a defensive one) to accommodate the R-13 ballistic missiles of the D-2 complex. But here we must make a reservation: the first carrier of this complex was the b-67 diesel-electric submarine, converted according to the B611 project. And it was followed by a series of project 629 diesel engines with similar characteristics.

Note that earlier (in 1955-1959), the same B-67 was equipped with the D-1 complex with the R-11FM missile with a range of 150 km-too small to seriously consider it as an msyas. Although in 1957, four submarines completed in Severodvinsk under the AV-611 project made up the first connection of missile submarines in the history of our fleet.

Thus, the K-19 is inferior to the palm both in terms of power plant and missile armament. Its uniqueness lies in the fact that it combined two valuable properties: an unlimited range of navigation and the ability to launch nuclear strikes on major military and economic centers of the enemy. This allows us to classify it as the first domestic ballistic missile submarines ("nuclear submarine with ballistic missiles").

But the nuances don't end there. Before the adoption of the K-19, the Soviet Navy managed to get its hands on submarines with p-5 cruise missiles, which (as well as the d-2 complex) were intended for nuclear attacks on large enemy centers near the coastline. The R-13 ballistic missile was more massive: weighing 13.56 tons against 5.4. But it could only fly 600 km: only a hundred more than the P-5D (version of 1962). When firing at the maximum range, both showed a circular probable deviation (CVO) of 4 km. Even the most powerful nuclear charge could hardly compensate for it. And here the R-13 came out on top with a monoblock warhead with a TNT equivalent of 1-1. 5 MT against 650 kilotons for the P-5D.

Since at that time no type of missile weapon showed any noticeable superiority, the fleet was replenished with two types of nuclear – powered ships–project 659 with Chelomey cruise missiles and project 658 with Korolev-Isaev ballistic missiles. Developed by TSKB-18 (now TsKB MT "Rubin"), they differed in length by 3 m, in displacement – by 300-400 t, but had a lot in common, including entire compartments of the same design. There were also many disadvantages in common, including in the line of weapons. So, launches could only be performed from the surface position. In the case of project 659, the first rocket could launch only four minutes after surfacing, and the entire stock of six P-5s was fired in 12.5 minutes. Even more time was required for the D-2 complex: preparation for the launch of the first rocket took 13-14 minutes, and the next ones were launched at five-minute intervals.

At first, the Navy ordered more boats with cruise missiles, since the P-5 entered testing (1957) and armament (1959) a couple of years earlier than the P-13. And also because the first one was lighter and more compact, which means it was better suited for diesel-electric boats, including those previously built according to the 613 project. The composition of their weapons was replenished with missiles during the conversion from tactical to strategic. But when planning the construction of new nuclear-powered ships, priority was given to ballistic missile carriers. 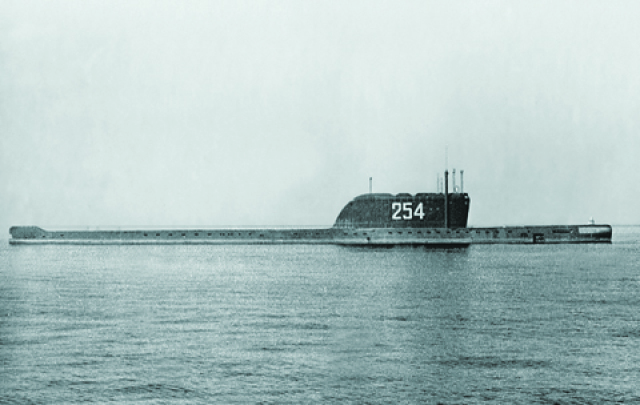 The K-19 boat turned out to be one of the most emergency, for which it received the nickname "Hiroshima". Photos from the site www.sevmash.ru

Komsomolsk-on-Amur decided to limit the production of ships under project 659 to five hulls, they were built here from the end of 1958 to 1963. They were the first nuclear-powered ships made in the far East (the lead ship was commissioned in June 1961). It was decided to assemble project 658 boats in Severodvinsk, but not in shop No. 42, where the Leninsky Komsomol and torpedo submarines of project 627 were built. specially for strategi, shop No. 50, originally built for battleships, was converted At the local plant. Its huge size made it possible to work in a line-by-line method on six submarines at once. The main building was laid down on September 17, 1958. A total of eight ships of this type were commissioned by 1964.

For a while, cruise missiles were considered more promising as strategic missiles. But in 1958, after three years of operation, the US Navy decommissioned Regulus-1, abandoned the Regulus-2 project, and finally adopted ballistic missiles as the "main caliber" of strategic missile submarines.

The Soviet Union stopped using the P-5 in 1966. Their carriers wanted to convert them to anti-ship P-6, but this turned out to be technically impossible: there was no room for guidance equipment. Therefore, in 1965-1969, they were converted into torpedo tubes according to the 659T project.

Rapid progress in the development of ballistic missiles is reflected in a significant improvement in their characteristics. Just a couple of years after the D-2 was adopted, it was followed by the D-4 with the R-21 missile weighing 20 tons, a range of 1,420 km and a CVO of 1.3 km. But the main difference was not in quantitative characteristics, but in the transition from surface to underwater launch.

Fortunately, the project 658 boats built by that time had sufficient modernization potential to allow re-equipment to the new complex. From 1964 to 1970, seven boats, including the K-19, were redesigned during planned medium repairs under the 658M project. The upgrade provided for the installation of three SM-87-1 launchers, each for a missile capable of delivering a 1200 kg warhead with a charge capacity of one megaton to the target. Related work extended the term of the series in the composition of NSNF.

The emergence of domestic second-generation SSBNs and the need to comply with the strategic offensive arms reduction Treaty with the United States led to the need to remove missile weapons from project 658 boats. In the 1970s, two of them were converted into torpedo boats, and then into communications ships. Project 658m boats were withdrawn from the Northern fleet in 1988, and K-19 lowered the flag of the latter in 1991. Despite the high noise level, outdated equipment and a number of other shortcomings, they continued to be combat units capable of solving the tasks assigned to them for a long time.

The construction of a series of first-generation submarines made it possible to lay the foundations of the underwater component of the nuclear triad in a short time. Thus, a counterweight was created to the American first-generation SSBNs of the George Washington type. The lead ship of this class first launched a 13-ton Polaris A1 ballistic missile from under water on July 20, 1960, just three months before the first launches from the K-19. However, the technical perfection of overseas submarines was much higher. The Soviet Union was able to approach it only with the commissioning of the lead nuclear submarine of project 667A.

The K-137 Leninets submarine was accepted by the Navy on November 6, 1967. A number of authoritative sources consider it, and not the K-19, the first domestic nuclear-powered strategic submarine. This is evidenced by the unprecedented composition of weapons, including 16 launchers of RSM-25 (R-27) missiles of the d-5 underwater launch complex.

Be that as it may, the K-19 happened to play an important role in the history of the Russian Navy, even if it was overshadowed by the loss of life.

Using the achievements of scientific and technological progress in improving the projects of submarines, Rubin specialists managed to achieve a significant improvement in performance. A comparison of first-generation SSBNs with the fourth shows what goals have been achieved over the past 60 years. While maintaining a working dive depth of 300-400 m, Borey develops a maximum stroke in the underwater position three knots more (29 knots instead of 26). Autonomy increased from 50 to 90 days. The number of crew remained almost at the same level (104 against 107). The noise level has decreased tenfold, as a result, the range of detection of our submarines by sonar means of NATO ships, even taking into account their continuous technical improvement, has been reduced by an order of magnitude.

At the same time, the size of the new ship's hull is larger than its forerunners. The length is 170 m against 114, width 13.5 m against 9.2. Displacement on the surface increased from 4080 to 14700 tons, and underwater-from 5300 to 24 thousand tons. the Number of ballistic missiles increased from three to 16, and the effectiveness of the "Bulava" is incomparably better than the R-13. So, the launch mass has increased from 13.56 tons to 37, the range-from 600 to 8-9 thousand km. instead of a monoblock SBCH, diluting warheads are used with guidance accuracy measured in meters, not kilometers.

And most importantly, the latest domestic missile carriers have become much more reliable in operation. And they are not, as before, a threat to the lives of their own crews rather than to the likely opponents.

The rights to this material belong to Независимое военное обозрение
The material is placed by the copyright holder in the public domain
Страны
Россия
США
Продукция
Булава-30
Компании
КБ-1
ЦКБ МТ Рубин
Проекты
667
NATO
Nimitz
СФ
Ядерный щит
ЯО
Do you want to leave a comment? Register and/or Log in
Log in via Facebook
The United States agrees with Stoltenberg on the inadmissibility of Russia's influence in the issue of NATO expansion
In the USA, they were surprised by the size of the Su-75
The Permanent Representative of the Russian Federation to international organizations in Vienna Ulyanov called the refusal of AUKUS to provide data on the union abnormal
The National Interest (США): российский танк Т-80 — это не шутка
Korean aircraft carrier "won back" funding
Шойгу счел необходимым построить в России еще несколько крупных городов
The State Duma appreciated the idea of banning the sale of grenades after the shooting at the MFC in Moscow
British military demanded $1.1 million for stuttering after Estonian frosts
Sasapost (Египет): американцы создают самый мощный лазер в истории. Что это значит?
Tank killer: the work of the PTKM-1R anti-roof mine was shown on video
Корпорация "Иркут" до конца 2018 года поставит ВКС РФ более 30 истребителей Су-30СМ
Как России зарабатывать больше на продаже вооружений
Putin signed the law on the powers of Roscosmos in the field of infrastructure construction
In the USA, they called the advantages of the Russian "Sun"
Американский эксперт назвал пять мощнейших российских танков
other topics discussed
2006-2021 © ВПК.name. All rights reserved.
When reprinting, link to ВПК.name required.
User agreement.
№ 21-PP in the register of information distributors.
18+
Website hosting: TimeWeb.