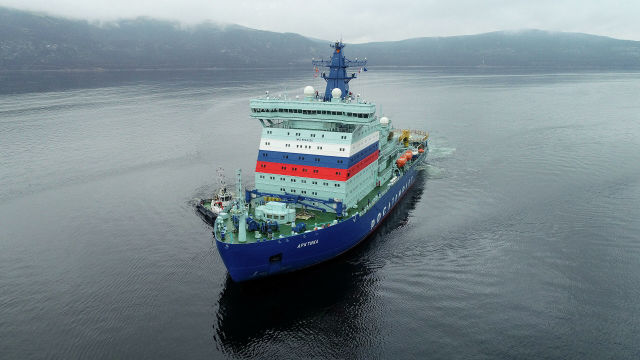 "The ship set a course in the direction of the Kara sea. Until mid-December, the Arctic nuclear icebreaker will operate in the waters of the Northern sea route, "the press service of the Federal state unitary enterprise Atomflot (part of Rosatom) reported.

The voyage will take three weeks. In the Arctic, there is a process of ice formation, which will allow you to "run in" the car.

"This is a normal process after any vessel is put into operation, "said Leonid Irlitsa, first Deputy General Director and Director of shipping at Atomflot.

After that, the nuclear-powered vessel will return to the port for resupply, and at the end of December it will again move to the waters of the Northern sea route. He will spend the winter and spring navigation in the Arctic.

The project 22220 nuclear icebreakers are the largest and most powerful in the world, breaking through ice up to three meters thick. They are needed to ensure Russia's leadership in the Arctic, as well as to send vessels with hydrocarbons from the Yamal and Gydan peninsulas and the Kara sea shelf to Asia.

In total, five such nuclear-powered vessels are planned to be built in Russia by 2035. The lead ship Arktika joined the Russian nuclear icebreaker fleet on October 21.