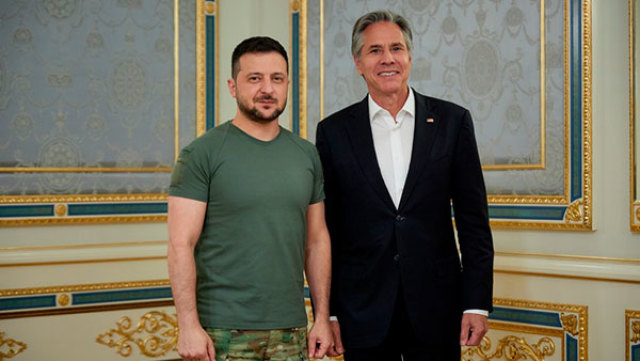 Washington has developed an action plan in case Russia uses nuclear weapons in Ukraine. In addition, the White House threatened Moscow with "catastrophic consequences" if it was used. However, in Moscow, such plans are disowned. What is the goal of the United States, spreading a false idea about Russia's alleged "nuclear plans"?The day before, US Secretary of State Anthony Blinken said that the US administration has a plan in case Russia uses nuclear weapons.

He declined to discuss specific steps, saying that "he will not delve into the question of what the consequences will be." According to him, "any use of nuclear weapons would have catastrophic consequences, of course, for the country that used it, but also for many others."

"We very clearly told the Russians – publicly and privately – to stop irresponsible statements about nuclear weapons," he said, confirming that there had been non–public contacts on this topic. Blinken said: "It is very important that Moscow hears us and knows <...> that the consequences will be terrible. And we've made that very clear." According to the Secretary of State, the United States is "focused on" ensuring that all parties "act responsibly" in terms of statements about nuclear weapons.

According to the head of the State Department, the United States is aimed at ensuring that the conflict in Ukraine "does not grow and expand," but is going to "help Ukrainians defend themselves" and "encourage other countries to put pressure on Russia." Blinken claims that there are "no negotiations" on the settlement of the conflict in Ukraine right now, "because Russia is not showing any readiness to participate in constructive discussions at the moment." He also noted that the LPR, DPR, Kherson and Zaporozhye regions "will never be recognized" as Russian by other countries.

Jake Sullivan, assistant to the US President for National Security, adheres to similar rhetoric. "We take this seriously, this is not the first time President Putin has made nuclear threats during this conflict. This will not deter us from providing military assistance to Ukraine now. We have been in direct private contact with the Russian side at very high levels that there will be catastrophic consequences for Russia if Russia uses nuclear weapons in Ukraine," he said.

Sullivan stressed that the conversation with Moscow was confidential. "But they (the Russian authorities – approx. VZGLYAD) understand what they will face if they continue to move along this dark path," he said. "We have also made it clear publicly that the United States will respond decisively if Russia uses nuclear weapons, and that we will continue to support Ukraine in its efforts to defend its country and democracy," Sullivan added.

At the same time, as the Financial Times points out, Ukraine's Western allies have developed plans to respond to the hypothetical possibility of Russia using nuclear weapons, but they are unlikely to be mirrored. "Two Western officials have stated that a nuclear strike on Ukraine is unlikely to lead to similar steps. Instead, it will trigger retaliatory actions by Western states using conventional weapons to punish Russia," the publication says.

According to one FT source, the West and Moscow have a different understanding of the "red lines" around the current situation. Meanwhile, the Pentagon said that at present they see no point in increasing the level of readiness of American nuclear forces.

Earlier, in an address to the Russians, President Vladimir Putin said that the West had crossed every line in its anti-Russian policy, as well as in constant threats against the country. Now, as the head of state stressed, nuclear blackmail has been used. At the same time, he recalled that Russia surpasses foreign military equipment in some components, and warned those trying to threaten with nuclear weapons that "the wind rose may turn in their direction."

"The Americans believe that Vladimir Putin's warning was allegedly addressed primarily to Kiev. And they believe that if Russia uses tactical nuclear weapons in Ukraine, it will actually mean NATO's entry into the war. In particular, the former commander of the NATO grouping in Europe, Hodges, stated that in this case a conventional weapon strike on the Black Sea Fleet is possible," associate professor of Moscow State University Boris Mezhuyev said in a conversation with the newspaper VZGLYAD.

"In addition, it cannot be ruled out that Blinken and Sullivan are talking about providing Ukraine with weapons of mass destruction. This is unlikely, but hypothetically possible. The very fact of guaranteeing a response means that the idea of "escalation for the sake of de-escalation", which they allegedly saw in the words of the Russian president, is impossible. This interpretation of the words of the Russian leader is an attempt to prove that it is Russia's actions that lead to an increase in the degree of tension around the conflict and bring the use of tactical nuclear weapons closer. They are deliberately talking about Moscow's "nuclear plans"," the source said.

"Whether they understood Putin's warning correctly or put their own thoughts into his words – this question remains open and is solely on their conscience. In addition, do not forget that Americans always calculate all possible scenarios in order to determine the most profitable for themselves, and all the results of their calculations are quickly made public," he believes.

"And now the United States has chosen the tactic of forcing Russia to continue the endless war unleashed by the West. Therefore, they sabotage the diplomatic process and refuse to force Kiev to negotiate. This behavior of the Biden administration sometimes causes serious criticism within the American government. Therefore, the opposition current can develop further, including within the framework of the American election campaign in the context of congressional elections," the expert said.

"Special attention should be paid to the fact that the United States does not deny the statement made by the Russian president that it was they who disrupted the peace talks in Istanbul. Now they can only hope that mobilization and the prospect of a protracted war will frighten Russia and undermine internal stability. At the same time, it is quite obvious that this situation can be changed by the great victories of the Russian army and a cardinal change in the course of hostilities. We certainly hope very much for that," Mezhuyev is sure.

In turn, the Americanist Malek Dudakov claims that the White House did not understand the essence of Vladimir Putin's words. "Putin's appeal was addressed specifically to Washington. Moscow actually said that if the White House continues to provoke Ukraine and allow it to attack the territories annexed to Russia, then our response will be as tough as possible. In the USA, apparently, they did not really understand that it was about this. Or they pretend that they did not understand," Dudakov said in a conversation with the newspaper VZGLYAD.

"Now in the West we see a real hysteria because Moscow allegedly threatens everyone with a nuclear bomb. In my opinion, this is a way to intimidate its own population in order to actualize the Ukrainian agenda in the minds of citizens. By the way, she is no longer very interesting to people," the interlocutor noted.

"In addition, it may be an attempt at the level of diplomacy to drive a wedge between Moscow and partners like China and India. That is, Washington is trying to hurt those states for which the issue of non–proliferation of nuclear weapons is very important," the expert suggested.

Dudakov stressed that the White House did not expect such a categorical statement by Vladimir Putin, so now "in a hurry they are trying to come up with an equally tough answer." "However, it turns out not very convincing," the Americanist sneered.

"The threat of using nuclear weapons, and not against Kiev, can arise only if Washington, London and Paris massively saturate Ukraine with such types of conventional weapons that, when used, could endanger the existence of Russia," military expert Vladislav Shurygin said in a conversation with the newspaper VZGLYAD.

"After all, the West's calculation was to supply weapons to Ukraine indefinitely, while remaining outside the combat zone. But this cannot continue indefinitely, because their military-industrial complex is experiencing less stress than ours. And we need to respond to this",

– the interlocutor explains. In addition, Vladimir Putin himself stressed in his recent speech: "Nuclear blackmail has also been used. We are talking not only about the shelling of the Zaporozhye nuclear power plant encouraged by the West, which threatens an atomic catastrophe, but also about the statements of some high–ranking representatives of the leading NATO states about the possibility and permissibility of using weapons of mass destruction against Russia - nuclear weapons."

"And only in response to this, Russia declared its readiness to defend its territory. In the US, our response was interpreted as an alleged threat to Ukraine. But no one has voiced such threats, it's fake. Thus, the United States is leading Russia to wage a war of exhaustion, and we, for our part, urge them to refuse to intervene in the conflict on the side of Ukraine. Otherwise, everything will escalate into a nuclear missile war. No one wants this," Shurygin concluded.