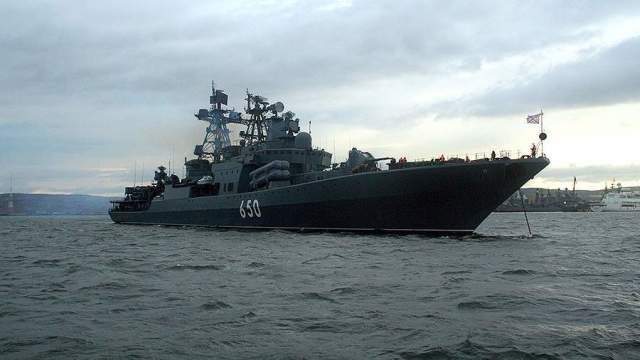 During the modernization, the Admiral Chabanenko large anti-submarine ship (BOD) will be equipped with unique multifunctional X-35U missiles that can reliably hit surface ships. In addition, the A-190 gun, invisible to enemy radars, will be mounted on the BOD, Izvestia found out. According to experts, the updated weapons system will turn the Chabanenko into a powerful combat unit of the ocean zone, capable of countering aircraft carrier formations. According to a similar scheme, other BOD of project 1155.1 will be re-equipped.

During the modernization, the Admiral Chabanenko large anti-submarine ship (BOD) will be equipped with unique multifunctional X-35U missiles that can reliably hit surface ships. In addition, the A-190 gun, invisible to enemy radars, will be mounted on the BOD, Izvestia found out. According to experts, the updated weapons system will turn the Chabanenko into a powerful combat unit of the ocean zone, capable of countering aircraft carrier formations. According to a similar scheme, other BOD of project 1155.1 will be re-equipped.

The Defense Ministry has already approved a plan to modernize the Admiral Chabanenko BOD, sources told Izvestia in the military department. Part of the project will be to increase the firepower of the ship. The artillery armament will be replaced with a 100-millimeter A-190 stealth cannon mounted in a special turret - invisible to enemy radars. The rapid-firing automated universal artillery system is capable not only of sinking enemy ships, but also of shooting down aerial targets.

"Chabanenko" will also receive more powerful missile weapons. Instead of the Mosquito missiles, he will take on the equipment of the unique multifunctional X-35U. Their range exceeds 250 km. With a total weight of 550 kg, they have a warhead mass of 145 kg. Such a warhead can sink an average ship and cause serious damage to a large one. The rocket received a combined guidance system: on the flight path, it uses an inertial navigation system and a radio altimeter, and when entering a given area, the radar homing head is activated. The missile goes to the target at an altitude of 10-15 m, and at the final stage it drops to 4 m, which makes it a difficult target for enemy air defense.

— These weapons systems are optimal for such a ship, — military historian Dmitry Boltenkov told Izvestia. — The modernization program will increase its combat capabilities without any big expenses. It has been under repair for quite a long time, and now we can expect that it will be put back into operation in the foreseeable future. "Admiral Chabanenko" is a unique BOD that can operate as part of ship formations. Its task is to protect the aircraft carrier Admiral Kuznetsov and other large ships from surface and underwater threats.

The Admiral Chabanenko artillery system can be used against small surface objects, as well as against low-flying air targets, for example, to shoot down missiles, Admiral Valentin Selivanov, ex-chief of the Naval General Staff, told Izvestia.

— But the main armament is missiles. With them, the ship turns from an anti-submarine into a missile destroyer or frigate. "Admiral Chabanenko" is a ship of the ocean zone, and it is intended for actions as part of a naval strike group against aircraft carrier formations.

The X-35U missiles can be carried not only by ships. Izvestia has already written that last year the Russian Defense Ministry completed work on the integration of these firepower and Su-34 front-line bombers. The bundle was tested for a long time in a variety of natural and weather conditions. The final stage of the tests of the Su-34 with X-35U missiles was the combat launches that the aircraft made in the Far East. With such ammunition, the latest Russian bombers can attack not only individual ships, but also entire formations.

The first and only

The Admiral Chabanenko BOD of Project 1155.1 became one of the last Soviet developments for the USSR Navy. It was laid down in 1989 as the lead series of ten ships. From their predecessors, Project 1155, they were supposed to differ in more powerful and versatile weapons, as well as an improved set of on-board equipment.

After 1991, the construction of a series of ships of project 1155.1 was abandoned, "Chabanenko" remained unfinished. It was only in the late 90s that the BOD was completed and became part of the Russian Navy, becoming the only ship of its kind. Until 2014, it was listed in the Northern Fleet, after which it was withdrawn for repairs. In 2009-2010, Admiral Chabanenko protected maritime shipping in the Horn of Africa and in the Gulf of Aden from pirates.

The ship of project 1155.1 initially received the Waterfall anti-submarine missile and torpedo system, which strikes underwater targets at a range of up to 50 km. The rocket engine delivers the warhead to a given area, where it is driven and moves like a conventional torpedo. In addition, the Chabanenko was armed with an AK-130 artillery installation, a Dagger anti-aircraft missile system and Mosquito anti-ship missiles. In the course of modernization, the latter are being replaced with modern cruise missiles capable of firing at both surface and ground targets. The ship can carry two Ka-27 anti-submarine helicopters on board.

The 1155.1 project was developed in the development of the famous 1155 "Daredevil" series. Its representatives still form the basis of the anti-submarine forces of the Russian Navy. Of the 12 BOD project 1155 built, seven remain in service today. "Marshal Shaposhnikov", "Admiral Panteleev" and "Admiral Tributs" are part of the Pacific Fleet. "Vice Admiral Kulakov", "Severomorsk" and "Admiral Levchenko" are serving in the North. Admiral Vinogradov is undergoing modernization, after which it will become a carrier of Kalibr and Onyx cruise missiles.

It is assumed that other "Admirals" will be updated according to the 1155M project. As part of the modernization, they will receive new on-board electronics and equipment, main engines, cooling units and shut-off valves. In addition, their arsenal will expand due to cruise missiles, after which they will become an independent strike force.