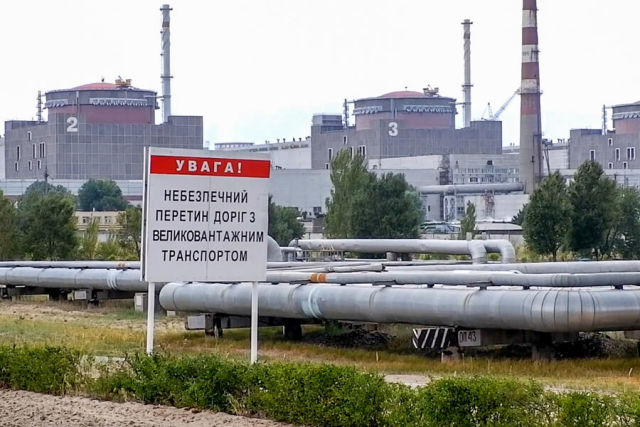 The head of the Ukrainian Energoatom warned Rosatom that if the company wants to connect the Zaporozhye NPP to the Russian power grids, the APU will strike at the power transmission lines of the station. The G7 foreign ministers also called on Moscow to immediately hand over all nuclear facilities in Ukraine to Kiev. Russia has requested a meeting of the UN Security Council because of the Ukrainian shelling of Energodar, where the NPP is located.

The head of Energoatom, Pyotr Kotin, said that the Armed Forces of Ukraine should launch an artillery strike on the power lines of the Zaporozhye NPP if Rosatom decides to connect the station to Russian networks. His words are transmitted by RBC Ukraine.

"It will be the right decision from the point of view of Ukraine - to interrupt the lines that they are going to connect. I think our armed forces will be ready to do this if the need arises," Kotin said.

The head of Energoatom explained that in order to switch nuclear power plant capacities to Crimea, it is necessary to completely "cut off" the station from the Ukrainian power system and transfer it to a substation in Dzhankoy and Kakhovka power plant.

According to him, to do this, it will be necessary to turn off all territories controlled by Russia, since "the Ukrainian and Russian power systems do not coincide in frequency" after connecting the Ukrainian to the European power system.

The Foreign Ministers of the Group of Seven countries (G7, "Big Seven") issued a joint statement addressed to the authorities of the Russian Federation.

They called for the transfer of the Zaporozhye NPP and all nuclear facilities of Ukraine under the control of Kiev.

"We, the Foreign Ministers of Germany, France, Italy, Japan, Canada, the United Kingdom and the United States, as well as the High Representative of the European Union [for Foreign Affairs and Security Policy], once again emphasize that we strongly condemn the ongoing unprovoked and unjustified war of the Russian Federation against Ukraine. The Russian Federation must immediately withdraw its troops beyond the internationally recognized borders of Ukraine and respect its sovereignty.",

- transmits the text of the statement to TASS.

The G7 ministers also believe that "Ukrainian personnel should be able to perform their tasks without threats and pressure." The region is threatened by Russia's control over the Zaporozhye NPP, according to the foreign ministers of the "Big Seven".

The document also states that the existing potential risks and threats due to hostilities undermine the ability of the IAEA (International Atomic Energy Agency) to monitor peaceful nuclear activities in Ukraine in order to ensure security.

At the same time, the G7 ministers supported the efforts of IAEA Director General Rafael Grossi to strengthen the safety of nuclear facilities in Ukraine.

"We emphasize the need to facilitate [sending] an IAEA expert mission to the NPP to solve nuclear safety problems with full respect for Ukraine's sovereignty," the statement said.

On June 3, the Russian authorities and the leadership of the IAEA secretariat fully agreed on the route and schedule of the agency's international mission to the Zaporozhye NPP. Director Grossi planned to personally lead the mission. However, the trip did not take place.

On August 9, the Russian Foreign Ministry said that the IAEA mission was "disrupted" at the last moment by the security department of the UN secretariat.

Russia demanded to convene a meeting of the UN Security Council on August 11 because of the shelling of the Zaporozhye nuclear power plant. According to the deputy permanent Representative of Russia to the UN Dmitry Polyansky, this was done "in connection with the Ukrainian attacks on the Zaporozhye NPP in recent days and their possible catastrophic consequences."

Before that, the APU fired at the territories of dry storage of spent nuclear fuel.

"The authorities of Energodar assess these actions extremely negatively, in case of damage to the infrastructure of the nuclear power plant, the consequences will be enormous.

There will be a global man-made catastrophe, which, in terms of the scale of radioactive contamination, will significantly exceed the consequences of the accidents at the Chernobyl nuclear power plant and [in Japan] Fukushima.",
- said the head of the pro-Russian administration of Energodar Alexander Volga.

On August 5, the APU also fired at the NPP and Energodar three times.

The Zaporizhia NPP was taken under control by Russian troops in March. Now the NPP is operating at 70% of full capacity, since there is an overabundance of electricity produced in the southern part of the Zaporozhye region.

One of the largest nuclear power plants in Europe, producing 25% of all Ukrainian electricity, is located in Energodar. There are six power units at the NPP. It is planned to supply Crimea and Sevastopol with electricity from the station.