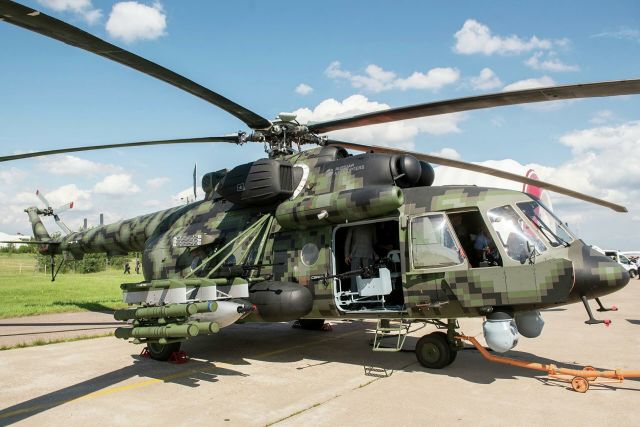 MOSCOW, January 21. /tass/. Two Mi-8AMTSh-VN helicopters of the latest modification for special purpose units will receive a separate helicopter regiment stationed in the Smolensk region. This was reported to journalists on Friday in the Western Military District (ZVO).

"A separate helicopter regiment of the Army of the Air Force and Air Defense of the Western Military District stationed in the Smolensk Region will receive two new multi-purpose Mi-8AMTSh-VN helicopters this year," the ZVO said in a statement.

It is noted that the Mi-8AMTSh-VN is the latest modification of a multi-purpose helicopter of army aviation, in which new engineering solutions have been implemented that increase the combat capabilities and survivability of the machine. The new version of the helicopter is equipped with the President-S defense system. The maximum take-off weight of the car increased to 13.5 tons, and the flight speed increased to 280 km / h.

Earlier, Anatoly Serdyukov, Industrial director of the aviation complex of Rostec State Corporation, noted that the technical appearance of the Mi-8AMTSh-VN was formed taking into account the experience of combat use of helicopters in modern military conflicts. According to him, several features of this upgraded helicopter increases the combat capabilities of the machine and allows it to be used for special operations in the most difficult conditions.

The new helicopter was developed in a special version, including taking into account the experience of fighting in Syria. The main feature of the Mi-8AMTSh-VN was the use of two 12.7 mm machine guns on the special suspension.

The helicopter was also equipped with new flight and navigation equipment, a gyrostabilized optoelectronic system, a searchlight with an infrared emitter, dual-band lighting equipment, adapted for the use of night vision goggles.

To increase combat survivability, the car was equipped with a digital autopilot, an on-board defense system that automatically recognizes the launch of missiles at a helicopter, performs jamming and the release of false thermal targets. The crew cabin and the main units of the helicopter are protected by new titanium alloy armor, to protect the personnel, the floor of the cargo cabin, as well as the sides of the helicopter to the level of the portholes, were covered with removable lightweight Kevlar armor.