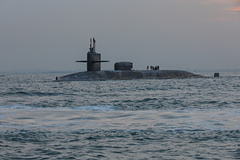 The Drive: The US Navy's Georgia nuclear submarine may strike Crimea

The nuclear submarine Georgia of the US Navy, which made a short stop in the Cyprus area, has all the means to strike Russia, for example, Crimea, and Ukraine, in particular, with Tomahawk cruise missiles, warns the American edition of The Drive.

"Given that the situation in Ukraine is rapidly approaching a crisis, it is likely that the Navy expects that the message about the presence of Georgia will serve as a signal to both allies and Russia that the United States has a combat-ready presence in the region, allowing it to strike at long distances with little risk to itself," the publication says.

The publication notes that the message about the appearance of Georgia off the coast of Cyprus appeared against the background of the continued presence in the Mediterranean of the aircraft carrier Harry S. Truman of the US Navy.

The Drive recalls that Georgia is one of four Ohio-type submarines converted as a carrier of cruise (not ballistic) missiles. The publication notes that now each of Georgia's 22 launchers is capable of launching up to seven BGM-109 Tomahawk cruise missiles with a range of 1,850 kilometers.

"In other words, draw a circle with a radius of 1,850 kilometers around the submarine. Most potential targets inside this circle are at risk when there is a submarine there. This means that it can easily hit targets in the Crimea, Ukraine and Russia, cruising in the eastern part of the Mediterranean Sea," the publication says.

In November 2021, The Drive reported that in the future, the newly recreated 56th Artillery Command of the US Army in Germany will receive at its disposal a number of currently being created samples of the latest American weapons. The publication mentions, in particular, a promising hypersonic missile Long-Range Hypersonic Weapon (LRHW), called Dark Eagle ("Dark Eagle"), a multifunctional Typhon system that allows launching a variety of missiles from one installation, including RIM-174 Standard Extended Range Active Missile (ERAM) and Tomahawk Land Attack Missile (TLAM), and Precision Strike Missile (PrSM).

А вот нападение на американское судно ВС РФ, уже совсем другое дело.
0
Inform
Do you want to leave a comment? Register and/or Log in
Log in via Facebook
США отреагировали на начало российских военных маневров у границ Украины
Только у России есть современная нелегальная разведка, заявил Нарышкин
Высокоточная управляемая ракета армии США рекордной дальности
Meet me: composition, areas of deployment and probable nature of the actions of the Polish occupation group of troops
Putin's next steps are predicted. The West has little chance
Lukashenko asked Putin to help adapt Belarusian planes to be equipped with nuclear warheads
The EU has appointed Ukraine as a candidate. And confirmed the correctness of the Russians
В США оценили возможную передачу Белоруссии российских «Искандеров»
In Kiev, the construction of a factory for the production of Bayraktar TB2 attack drones was announced
"Blow to the hangars": the Russian Defense Ministry explained why the shopping center in Kremenchug caught fire
"They want to close the sky." What did the United States decide for the sake of Ukraine
Putin: 200 American tactical nuclear warheads are stored in Europe, 257 aircraft have been prepared for their possible use
Roscosmos has published the coordinates of the "Decision-making Centers" in Europe and the United States against the background of the NATO summit that started in Madrid
Chinese bombers with hypersonic missiles flew near Japan - Mass media
Разработчик: модернизированный "Спрут" для ВДВ получил цифровую систему управления огнем
other topics discussed
2006-2022 © ВПК.name. All rights reserved.
When reprinting, link to ВПК.name required.
User agreement.
№ 21-PP in the register of information distributors.
18+
Website hosting: TimeWeb.