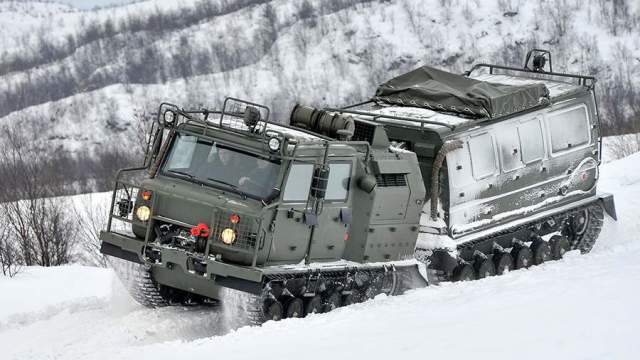 TSAMTO, January 10. The GAZ-3344-20 Aleut two-link tracked floating snowmobile of high cross-country capability was adopted by a division of the railway troops of the Central Military District stationed in Udmurtia.

The Aleut all-terrain vehicle is made according to a modular scheme: the front link is an energy module that can accommodate up to 5 people, including the driver, the rear link is a transformable passenger module with a capacity of 15 people, which can be easily converted into a sleeping, medical unit or command post, its payload is 2500 kg.

The operating temperature ranges from -40 to +40 degrees. With and is perfectly suited to the local sharply continental climate. GAZ-3344-20 is able to overcome water obstacles. The movement afloat is carried out by means of a crawler mover. The car is equipped with an engine and fuel preheater, equipped with a cabin heating system.

"Aleut" is equipped with a well-proven diesel engine of domestic production, an automatic transmission and simple controls, like a truck.

The newest "Aleut" will perform a whole range of tasks during the daily activities of the compound, during various exercises, including building bridges, crossings for troops marching to the area of combat training tasks, the press service of the Central Military District said on January 10.