Ukraine has upgraded the commander's tank 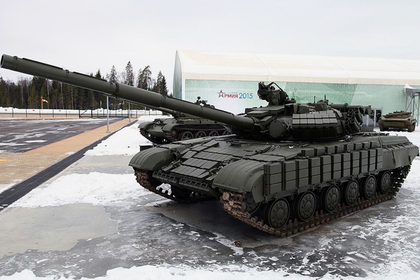 The state enterprise "Kharkiv Armored Plant" for the first time carried out a deep modernization of the commander's tank T-64BVK, reports "Ukroboronprom". The concern showed a video of tests of the updated equipment on YouTube .

Ukroboronprom claims that in the course of modernization, the car received modern devices, in particular a television surveillance system for the surrounding space, satellite navigation equipment and a commander's tower with a 12.7 mm NSVT machine gun. Also, the T-64BVK received an additional coarse filter of the fuel system of the boiler-heater and a surveillance camera for the commander with a detection range of up to two kilometers.

"The modernization of the commander's tank is highly responsible, since it is necessary not only to significantly improve the existing characteristics, but also to create all the appropriate conditions for effective management of the unit in all weather conditions and at any time of the day. The staff of the plant has successfully completed this task. This is of particular importance in the context of the armed aggression of the Russian Federation against Ukraine," said German Smetanin, director of the Kharkiv Armored Plant.

As Defense Express notes, in the Soviet version of the T-64BVC version of 1985, to communicate with the headquarters at long distances, it had to stop and install a special mast, whereas the upgraded tank, thanks to "modern protected digital means of communication of Western production," can produce such an exchange of information directly in motion.

In February, the counterintelligence of the Security Service of Ukraine (SBU) detained in Kharkiv a citizen who allegedly tried to take possession of the drawings of the "secret" T-84BM "Oplot" tank and transfer them to Russia.

The rights to this material belong to Lenta.ru
The material is placed by the copyright holder in the public domain
Страны
Россия
Украина
Продукция
Т-84 Оплот
Компании
Укроборонпром
Comments [2]
№1