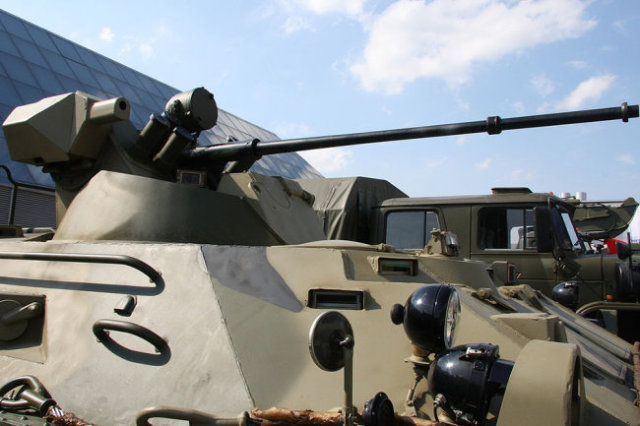 In Yemen, an unusual homemade hybrid - a Toyota Land Cruiser 79-series pickup truck with a combat compartment installed on it from the Russian BTR-80A was noticed.

Local craftsmen have previously, using the experience of combat operations, independently armed such all-terrain vehicles. They mounted turrets from the reconnaissance and patrol BRDM-2 or BTR-60PB armored personnel carriers with large-caliber 14.5-mm KPVT and 7.62-mm PKT. Such measures significantly increased the firepower.

Now, combat modules from the "eighties" have been used. It is known that the armed forces of this state acquired more than 90 such combat vehicles in Russia before 2010.

According to local sources, this technique has proved quite successful in battles. It has good mobility. The existing BPPU-1 cannon and machine gun system is equipped with a 30-mm 2A72 rapid-fire automatic cannon and a paired 7.62-mm PKTM. The ammunition of the gun is 300 shells, the machine gun is 2000 rounds.

However, it was not without losses: the armored personnel carriers were knocked out during military operations, some failed for technical reasons. At the same time, their preserved weapons were used on other samples. For example, a few years ago, the M-ATV (4x4) armored car of the American company Oshkosh Truck was modernized in this way.

Now a similar tower has appeared on the Toyota Land Cruiser. It is possible that in the near future the number of pickups improved in this way will only increase.