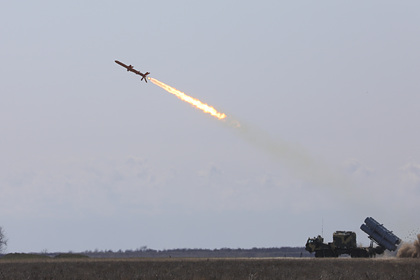 Ukraine wanted to create an upgraded version of the RK-360MC "Neptune" coastal missile system. The modified complex can be used to defeat ground targets. Oleg Korostelev, the general designer and general director of the Luch State Design Bureau, told about this in an interview with the Texts publication.

"The Neptune can be modified for use as a low — flying cruise missile that strikes ground targets," Korostelev said. According to him, the missile system "has all the necessary options"for this.

Korostelev also added that to create such a complex, a request from the military is necessary. According to him, the development of the modernized "Neptune" can be started only after receiving the technical task.

The authors of the Ukrainian portal Defense Express suggested that the Turkish Kara Atmaca could serve as an example for such a modernization of the Neptune. The surface-to-surface missile is based on the Atmaca anti-ship missile.

In August, it became known that the RK-360MC "Neptune" anti-ship missile system will be transferred to the Tatra T815 chassis. The refusal of the chassis of the Ukrainian company AvtoKrAZ was explained by the low quality of products and the instability of order fulfillment.