A two-legged robot was taught to fly in China 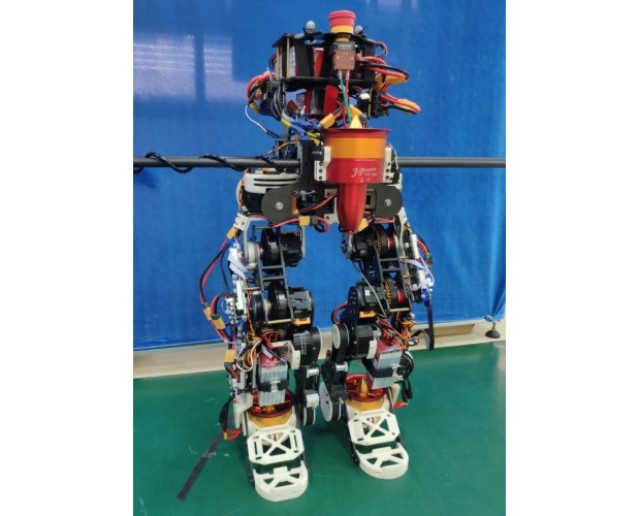 In China, a prototype of a two-legged robot Jet-HR2 was created, which was taught to fly with the help of fans. Details about the development of the engineers of the Guangdong Institute of Technology are set out in the preprint of the report, available at arXiv.org.

Walking robots are a promising direction because of their patency in difficult conditions. Such structures are better adapted to obstacles of different heights and depths. But in some cases, obstacles can be insurmountable for walking robots due to incompatible dimensions. The Chinese robot will be able to fly over such obstacles.

The "flying" Jet-HR2 was a development of the Jet-HR1 model, introduced in 2018. The robot, created under the leadership of Zhifeng Huang, could step over obstacles thanks to an unusual design. In the legs of the robot there are fans that hold the machine at the moment when the Jet-HR1 leg is stretched forward.

In the updated design, the number of fans has been increased to four, so that the robot can break away from the surface. Two fans are located in the middle part of the feet, which allows the thrust vector to pass along the legs, providing a stable takeoff. Jet-HR2 was additionally equipped with a pair of fans located in the upper part of the robot.

Two controllers are responsible for the stability of the flight, compensating for pitch and yaw. The demonstration videos show the robot flying with and without controllers, demonstrating a stable flight. During the demonstration, the developers tested the Jet-HR2 in short-term flights during which the robot was held by safety guides.

The creators of Jet-HR2 will reveal details about their development at the ICRA conference in 2022.

Earlier, a [...] robot for fighting snipers was presented at the Army-2021 forum. The Sosna-N detection complex, developed by specialists of the M. F. Stelmakh Polyus Research Institute (part of the Shvabe holding of the Rostec State Corporation), can automatically track optical devices that monitor the protected sector.

The rights to this material belong to Lenta.ru
The material is placed by the copyright holder in the public domain
Страны
Китай
Компании
Ростех
Швабе ОАО
Проекты
АРМИ-20XX
Робот
Do you want to leave a comment? Register and/or Log in
Log in via Facebook
The Permanent Representative of the Russian Federation to international organizations in Vienna Ulyanov called the refusal of AUKUS to provide data on the union abnormal
The United States agrees with Stoltenberg on the inadmissibility of Russia's influence in the issue of NATO expansion
In the USA, they were surprised by the size of the Su-75
The National Interest (США): российский танк Т-80 — это не шутка
Korean aircraft carrier "won back" funding
Шойгу счел необходимым построить в России еще несколько крупных городов
The State Duma appreciated the idea of banning the sale of grenades after the shooting at the MFC in Moscow
British military demanded $1.1 million for stuttering after Estonian frosts
Sasapost (Египет): американцы создают самый мощный лазер в истории. Что это значит?
Tank killer: the work of the PTKM-1R anti-roof mine was shown on video
Корпорация "Иркут" до конца 2018 года поставит ВКС РФ более 30 истребителей Су-30СМ
Как России зарабатывать больше на продаже вооружений
Putin signed the law on the powers of Roscosmos in the field of infrastructure construction
In the USA, they called the advantages of the Russian "Sun"
Американский эксперт назвал пять мощнейших российских танков
other topics discussed
2006-2021 © ВПК.name. All rights reserved.
When reprinting, link to ВПК.name required.
User agreement.
№ 21-PP in the register of information distributors.
18+
Website hosting: TimeWeb.