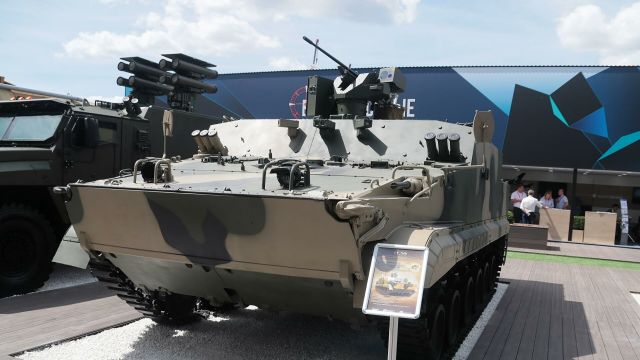 Moscow. August 24. INTERFAX - Holding " High-precision Complexes "(Rostec State Corporation) presented at the military-technical forum "Army-2021" a version of the BT-3F armored personnel carrier adapted for operations in the Far North, according to a press release from Rostec.

"The armored personnel carrier is developed on the basis of the BMP-3F infantry fighting vehicle, and is adapted to perform special tasks in extreme temperatures. It is equipped with a insulated body, an independent heating system that is able to maintain a plus temperature in the cabin even when the main engine is turned off," the state corporation's press release emphasizes.

It is noted that the BT-3F received special tracks with reduced pressure on the ground, which significantly increased the patency of the machine. The vehicle is armed with a 12.7-mm autonomous combat module with an integrated thermal imager and a laser rangefinder. The armored personnel carrier is designed to transport motorized infantry, specialized units, and can also serve as a tactical command post and a medical vehicle.

Bekhan Ozdoev, industrial director of the Rostec cluster of weapons, ammunition and special chemicals, said that the modernized BT-3F " retained a high level of security and mobility from its predecessor, the BMP - 3F, and at the same time received new opportunities for operations at temperatures up to-50 degrees."

"The machine is equipped with a 450 hp engine with a power reserve of 600 km, it is capable of swimming, landing with the help of heavy parachute systems or being transported on the external suspension of the Mi-26 helicopter. The machine will be able to significantly increase the combat potential of units performing tasks in the Arctic," said Ozdoev, whose words are quoted in a press release.

It is also emphasized that the BT-3F, depending on the configuration, can carry, in addition to the crew, up to 15 paratroopers with the ability to place an additional. equipment, such as an unmanned complex, designed for reconnaissance and target designation.

The rights to this material belong to Интерфакс-АВН
The material is placed by the copyright holder in the public domain
Страны
Россия
Продукция
БМП-3
БМП-3Ф
БТ-3Ф
Ми-26
Компании
Высокоточные комплексы
Ростех
Проекты
Арктика
АРМИ-20XX
Медицина
Do you want to leave a comment? Register and/or Log in
Log in via Facebook
The Permanent Representative of the Russian Federation to international organizations in Vienna Ulyanov called the refusal of AUKUS to provide data on the union abnormal
The United States agrees with Stoltenberg on the inadmissibility of Russia's influence in the issue of NATO expansion
In the USA, they were surprised by the size of the Su-75
The National Interest (США): российский танк Т-80 — это не шутка
Korean aircraft carrier "won back" funding
Шойгу счел необходимым построить в России еще несколько крупных городов
The State Duma appreciated the idea of banning the sale of grenades after the shooting at the MFC in Moscow
British military demanded $1.1 million for stuttering after Estonian frosts
Sasapost (Египет): американцы создают самый мощный лазер в истории. Что это значит?
Tank killer: the work of the PTKM-1R anti-roof mine was shown on video
Корпорация "Иркут" до конца 2018 года поставит ВКС РФ более 30 истребителей Су-30СМ
Как России зарабатывать больше на продаже вооружений
Putin signed the law on the powers of Roscosmos in the field of infrastructure construction
In the USA, they called the advantages of the Russian "Sun"
Американский эксперт назвал пять мощнейших российских танков
other topics discussed
2006-2021 © ВПК.name. All rights reserved.
When reprinting, link to ВПК.name required.
User agreement.
№ 21-PP in the register of information distributors.
18+
Website hosting: TimeWeb.