For the first time, a parachute for landing an armored car "Typhoon-airborne" was shown at Army-2021 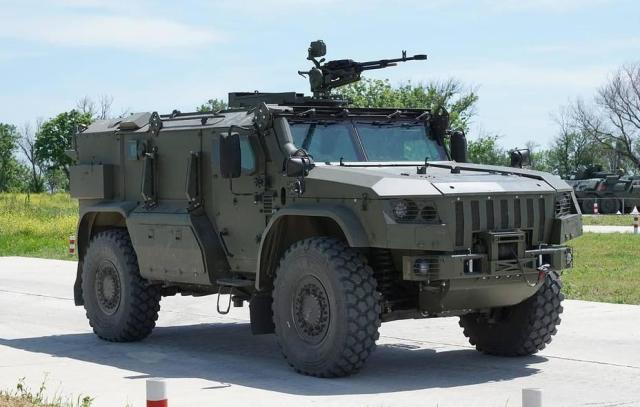 PATRIOT PARK /Moscow Region/, August 22. / TASS/. For the first time, visitors to the Army-2021 forum can see a cargo parachute system for landing an armored vehicle "Typhoon-Airborne". The Horizontal-4000 cargo parachute system and special-purpose systems for high-altitude landing are also presented for the first time, the press service of the Technodiinamika holding of the Rostec state Corporation told reporters on Sunday.

One of the main novelties of the forum was the cargo parachute system, developed within the framework of the "Parachute" ROC, for landing the Typhoon-AIRBORNE armored car. "We will complete preliminary tests of prototypes of the universal cargo platform being developed within the framework of the Parachute R & D, including joint flight experiments, by the end of 2021," the press service quotes Igor Nasenkov, General director of Technodinamika, as saying.

The cargo controlled parachute system "Horizontal-4000" is also undergoing preliminary tests. As specified in the holding, the feature of the new product is the use of a wing-type parachute, controlled by an automatic system that affects the slings, changing the direction and speed of flight. The system will allow you to land at a given point with high accuracy, using the orientation of the GLONASS and GPS satellite navigation systems. Remote control of the system from the ground is provided.

In addition, parachute systems for landing personnel are also widely represented in the exhibition. For example, the individual parachute system "Stayer", a tandem system with an increased load capacity of up to 225 kg, and a special system designed for long-term stay of parachutists in the air. It allows you to make jumps at distances up to 60 km relative to the point of leaving the aircraft with a fair wind. All three systems have passed state tests and are currently being accepted for supply by the Ministry of Defense of the Russian Federation.

The forum also presents a line of Cadet parachutes, including the newest Cadet-100 with a round dome, which is currently undergoing testing, and the Cadet-100D, which is just being prepared for testing. As well as a parachute suspension system that allows you to drop service dogs.

The rights to this material belong to ТАСС
The material is placed by the copyright holder in the public domain
Страны
Россия
Продукция
Тайфун-ВДВ
Компании
Минoбороны РФ
Ростех
Технодинамика
Проекты
GPS
АРМИ-20XX
ГЛОНАСС
Тайфун
Do you want to leave a comment? Register and/or Log in
Log in via Facebook
The Permanent Representative of the Russian Federation to international organizations in Vienna Ulyanov called the refusal of AUKUS to provide data on the union abnormal
The United States agrees with Stoltenberg on the inadmissibility of Russia's influence in the issue of NATO expansion
In the USA, they were surprised by the size of the Su-75
The National Interest (США): российский танк Т-80 — это не шутка
Korean aircraft carrier "won back" funding
Шойгу счел необходимым построить в России еще несколько крупных городов
The State Duma appreciated the idea of banning the sale of grenades after the shooting at the MFC in Moscow
British military demanded $1.1 million for stuttering after Estonian frosts
Sasapost (Египет): американцы создают самый мощный лазер в истории. Что это значит?
Tank killer: the work of the PTKM-1R anti-roof mine was shown on video
Корпорация "Иркут" до конца 2018 года поставит ВКС РФ более 30 истребителей Су-30СМ
Как России зарабатывать больше на продаже вооружений
Putin signed the law on the powers of Roscosmos in the field of infrastructure construction
In the USA, they called the advantages of the Russian "Sun"
Американский эксперт назвал пять мощнейших российских танков
other topics discussed
2006-2021 © ВПК.name. All rights reserved.
When reprinting, link to ВПК.name required.
User agreement.
№ 21-PP in the register of information distributors.
18+
Website hosting: TimeWeb.