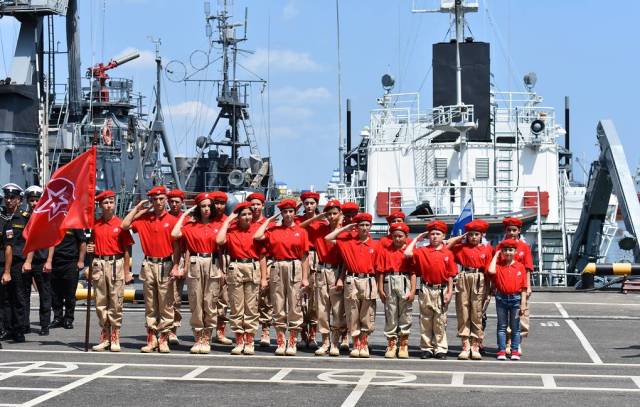 MOSCOW, August 11. /TASS/. "Yunarmiya" created a jung detachment under the Caspian Flotilla in Makhachkala. This was reported to TASS on Wednesday in the press service of the organization.

"In Makhachkala, a solemn event dedicated to the reception of young patriots in the new detachment of the sea and river yunarmeysky direction" Young Men of the Caspian Sea "was held at the base of the brigade of surface ships of the Caspian Flotilla," the message reads.

According to the information of the "Unarmia", the decision to create a detachment of the sea and river unarmee direction on the basis of the Caspian Flotilla was made by the Commander-in-Chief of the Navy in accordance with the order of the Minister of Defense of Russia dated June 16, 2021 for the development of specialized unarmee detachments.

"The initiation ceremony was opened by the commander of the flotilla ships brigade, captain of the 2nd rank Sergey Zotov, the children were also congratulated by the deputy director of the" Small Academy of Sciences of the Republic of Dagestan " for educational work Javidin Jamiev, representatives of the military Commissariat of the republic, the champion of the Soviet Union, the owner of numerous world records in weightlifting Avset Avsetov, officers of the surface ships brigade and the flotilla headquarters department," the press service noted.

Now in the Republic of Dagestan, where the detachment "Young Men of the Caspian Sea" was opened, almost 20 thousand children are in the ranks of the All-Russian children's and youth military-patriotic social movement "Yunarmiya". It was created in 2016 on the initiative of the Ministry of Defense and with the support of the President of Russia. There are almost 850 thousand participants in the ranks of Unarmia all over Russia. The main task of the movement is patriotic education, as well as physical, intellectual and social development of young people.

The rights to this material belong to ТАСС
The material is placed by the copyright holder in the public domain
Страны
Россия
Компании
Минoбороны РФ
Проекты
КФ
Do you want to leave a comment? Register and/or Log in
Log in via Facebook
The Permanent Representative of the Russian Federation to international organizations in Vienna Ulyanov called the refusal of AUKUS to provide data on the union abnormal
The United States agrees with Stoltenberg on the inadmissibility of Russia's influence in the issue of NATO expansion
In the USA, they were surprised by the size of the Su-75
The National Interest (США): российский танк Т-80 — это не шутка
Korean aircraft carrier "won back" funding
Шойгу счел необходимым построить в России еще несколько крупных городов
The State Duma appreciated the idea of banning the sale of grenades after the shooting at the MFC in Moscow
British military demanded $1.1 million for stuttering after Estonian frosts
Sasapost (Египет): американцы создают самый мощный лазер в истории. Что это значит?
Tank killer: the work of the PTKM-1R anti-roof mine was shown on video
Корпорация "Иркут" до конца 2018 года поставит ВКС РФ более 30 истребителей Су-30СМ
Как России зарабатывать больше на продаже вооружений
Putin signed the law on the powers of Roscosmos in the field of infrastructure construction
In the USA, they called the advantages of the Russian "Sun"
Американский эксперт назвал пять мощнейших российских танков
other topics discussed
2006-2021 © ВПК.name. All rights reserved.
When reprinting, link to ВПК.name required.
User agreement.
№ 21-PP in the register of information distributors.
18+
Website hosting: TimeWeb.