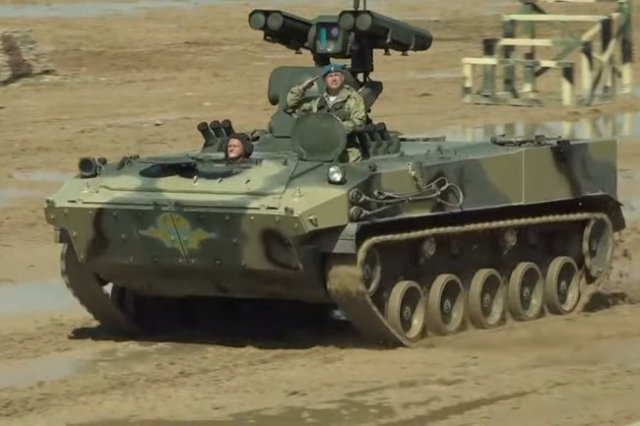 A family of various combat and auxiliary equipment has been developed for the Russian airborne troops on the platform of the BMD-4M amphibious assault vehicle. Many of these samples could be met at the Alabino training ground near Moscow on the eve of the celebration of the 91st anniversary of the creation of the Airborne Troops.

According to the Department of Information and Mass Communications of the Ministry of Defense of the Russian Federation, during a dynamic display of airborne forces equipment, guests and the Minister of Defense of the Russian Federation Sergey Shoigu were shown a 120-mm self-propelled artillery gun "Lotus", a 125-mm anti-tank gun 2S25M "Sprut-SDM", a fire control machine "Zavet-D", etc.

For the first time, the Kornet-D1 self-propelled anti-tank missile system and the battery commander's reconnaissance and control vehicle, which includes these ATGMs, were shown.

In the photos that appeared on the Network, you can see that the tank destroyer, which received an additional reservation, is armed with eight Kornet anti-tank missiles of the most advanced modification, having an increased firing range and more significant armor penetration.

As previously reported, such weapons are capable of destroying not only foreign tanks of the latest versions,but also low-flying aircraft. Multi-channel sights allow you to effectively operate at night, in bad weather conditions, as well as when the enemy tries to hide behind smoke screens.

The battery commander's vehicle has a smaller number of ATGMs, but is equipped with additional detection equipment.

For a long time, the basis of the anti-tank defense of the airborne forces was the BTR-RD "Robot" with the "Fagot" and "Competition" complexes. Upgraded versions have begun to receive "Cornet" in recent years, now even more advanced equipment is expected to arrive.

The rights to this material belong to Российская газета
The material is placed by the copyright holder in the public domain
Страны
Россия
Продукция
2С25 Спрут-СД
БМД-4
Корнет
МРУ
Фагот
Компании
Минoбороны РФ
Персоны
Шойгу Сергей
Проекты
Робот
Do you want to leave a comment? Register and/or Log in
Log in via Facebook
The Permanent Representative of the Russian Federation to international organizations in Vienna Ulyanov called the refusal of AUKUS to provide data on the union abnormal
In the USA, they were surprised by the size of the Su-75
The United States agrees with Stoltenberg on the inadmissibility of Russia's influence in the issue of NATO expansion
In the USA, it was proposed to ban "Solntsepeki" and "Pinocchio"
Putin signed the law on the powers of Roscosmos in the field of infrastructure construction
Korean aircraft carrier "won back" funding
Конфликты: Йемен - "забытая" война
The National Interest (США): российский танк Т-80 — это не шутка
Russia will offer India the technology of the Octopus tank
Шойгу счел необходимым построить в России еще несколько крупных городов
The State Duma appreciated the idea of banning the sale of grenades after the shooting at the MFC in Moscow
British military demanded $1.1 million for stuttering after Estonian frosts
Sasapost (Египет): американцы создают самый мощный лазер в истории. Что это значит?
Tank killer: the work of the PTKM-1R anti-roof mine was shown on video
Корпорация "Иркут" до конца 2018 года поставит ВКС РФ более 30 истребителей Су-30СМ
other topics discussed
2006-2021 © ВПК.name. All rights reserved.
When reprinting, link to ВПК.name required.
User agreement.
№ 21-PP in the register of information distributors.
18+
Website hosting: TimeWeb.